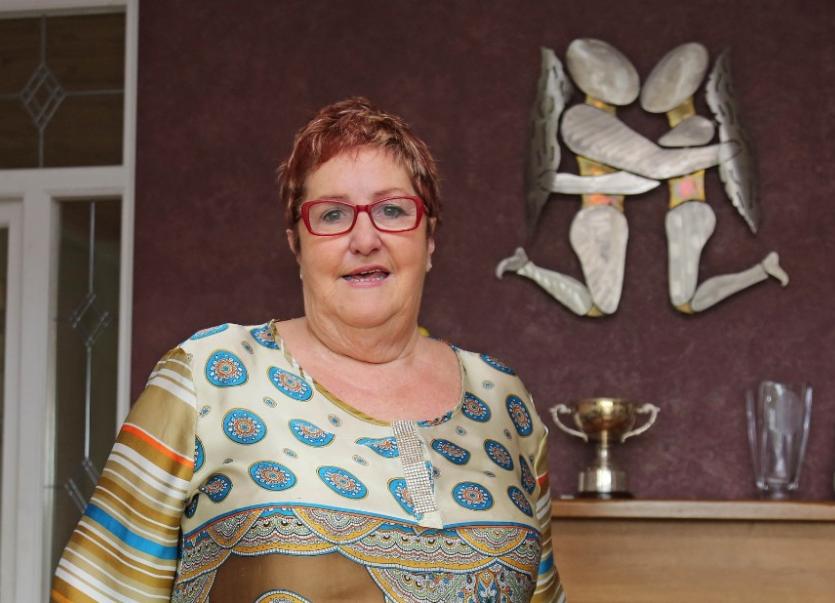 Family is absolutely everything to popular Longford lady, June Belton. The Legan native is a former nurse at St Joseph's, a member of St Mel's Musical Society since its revival 40 years ago, a mother of three and grandmother of “six fabulous grandchildren” aged from three to eleven.

As a young woman, June was educated in the Domestic Science college in Ardagh, where she met her husband, Robert Belton, before heading off to Galway to study nursing for three years.

“I had three brilliant years in Galway,” she recalled.

“I made loads of fantastic friends. We meet up on the first of May every year, a group of us, and thank God there’s still lots of us around. We meet in Galway and we reminisce and take photographs.”

After graduating from Galway, she moved back to Longford and took up a post as a nurse in St Joseph's Hospital.

She married Robert in 1973 and the couple welcomed their first child, Derek, into the world a year later. Their second son, Gavin, was born in 1976 and their only daughter, Janice, came into their lives in 1980.

“And they were great years… great memories…,” said June as tears welled up in her eyes.

“They were great kids. And, like any other family, we had ups and downs and it was hard then.”

The emotion in her voice as she recalls family life in the early days is because she still feels the heartache of losing her first son, Derek, to cancer in 2004. He was only 30 years old.

“He got sick in 2001 and he battled on for three years and we had good times and bad times over that,” said June.

There was an emotional pause as she remembered the pain of losing Derek before the conversation turned to the ways in which his memory is kept alive here in Longford.

“Oh it was very emotional. It was nice to win it. His memory lives on and I suppose every group should have something to work towards. And anyone that ever got it, I think they appreciated it,” she said.

Derek's memory is also kept alive every time June picks up a paintbrush.

“I took up art before Derek got sick. I was always rattling on about ‘when I have time, when I retire, I’m going to do painting’.

“So he came in one day and threw the Leader on the table and said ‘there - don’t wait until you retire; there’s a course starting next week’.”

So she did start painting and, later, was one of the founding members of Ardagh Art Group - a group that is open to anyone who would like to start painting.

“Art is a great way of expressing yourself. You always have someone when you have a book. I always said to my grandkids: ‘get reading; because you’ll never be alone if you read’. It’s the same with art. It’s probably my golf.

“We've made great friends out of the art group,” said an ever sociable June.

“Actually, we started back this week. There was maybe a core of seven of us and sometimes there’d be about ten. And I went in this week and there was 14.

“They’re from all over and some of them came out of the town and said ‘oh, we saw you in the paper and we got the courage to come’. And that was lovely. Not alone did my art night hopefully do St Luke’s good, it’s given other people the courage to come and do what they wanted.”

June recently launched an exhibition in the Backstage Theatre, displaying her own artwork, which was auctioned off in aid of St Luke's Hospital.

“Derek spent a lot of his time in St Luke’s, coming and going for treatment.

“There was something magical about Luke’s, even though there was so much tragedy going on inside. The grounds were always kept very well - the trees, the flowers… every spring you’d see these beautiful flowers.

“And Derek used to get out of the car and say ‘isn’t it great to be alive?’.

“It meant a lot to Derek and to other patients. And I’m sure to this day there’s people going up there with the same hope that we had as a family,” said June.

“But Derek… he went up for his last treatment the week before he died… on the Tuesday. And I knew he wasn’t fit to go but I went with him, hoping that... you know…

“He went and he wasn’t able to walk… so we walked him down and his oncologist came down and said ‘Derek’, we’re going to look after you. And Derek knew then that that was it. So they took him in. They couldn’t let him home because of the type of cancer he had.

“At some stage during that week, a nurse came to me and she said ‘now is the time to be his mother’.”

Derek's passing was a blow to the whole family but the kindness and the care he received while he was in St Luke's has never been forgotten.

“It was always at the back of my mind that I wanted to do something for Luke’s,” said June.

So she organised her exhibition to raise funds for the facility that meant so much to her son.

“Oh it was fantastic,” she said of the support she received on the night.

“I couldn’t believe the generosity of people. Everyone was there for the family. My family thought I was mad when I said I’d do this. But they were 100% behind me and thought it was great that I was doing it.”

And the night wouldn't have been so wonderful without the stellar help and support of local auctioneer Paddy Quinn, who made the night so special, she added.

“If Derek could have been there that night...,” said June through tears again.

“I think he’d say ‘I’m so proud of you mam’. Because before he passed away he said to me... ‘I want you to keep your paintings going’.”

When Derek got sick, the family had a lot of involvement in various groups and societies around the county -one of which was St Mel's Musical Society, which June said was a great support to them when times were hard.

“So we re-established it in ‘78. We went to the meeting - there were four of us at the first meeting. I’m the only one now that was at that first meeting still in the society.

“We had some great years, met loads of lovely people. We had our ups and downs there too but we got through everything,” she laughed.

Both June and Robert have given 40 years of their lives to the Musical Society, with Robert working hard on the fantastic sets every year.

“It’s great. We’ve had lots of rows about it but that goes with the territory. But it has been a big part of our lives. And I suppose we’re hoping that young people will take over. I’d be easily replaced but Robert Belton and Eddie Kiernan, I don’t know how they’re going to be replaced.”

June was always happy to be in the chorus and never stepped into a leading role, but she was visibly bursting with pride when the conversation turned to her daughter, Janice, who played the leading role in this year's production, 'Sister Act'.

“Oh my god, I was so, so proud of her. So proud of her. And to have three little girls and to be able to do that and commit to it. And it’s nice memories for her kids,” she said.

Longford Lives: Janice Gibney steps from behind the scenes to front and centre

“Life now is about building memories for your family. Because we have had so many good memories. And that has held us together as a family.

“Everything else is insignificant if you haven’t got your family and people around you to care for you. Because people come and go and everyone gets busy with their lives. But your family stays with you through thick and thin.”

The next big musical event is the upcoming 40th anniversary ball, which takes place in the Longford Arms on Saturday, October 6.

They can also be purchased at the Longford Arms or Coffee House 45 and the price includes a drinks reception, four-course meal and music by the Connor McKeon Band.

Which is understandable, as June and Robert are enthusiastic travellers themselves.

“We travel a lot. We’ve been in Vietnam, Cambodia, we did all that. We did China. We did France a good bit.

“This year we’re going to New Zealand and Australia. We’re taking a month off to do that. We say we’re mad in the head to be doing it, but there’s no point sitting in years to come and looking out the window having regrets about things you wanted to do.

“I’m lucky that Robert is equally as enthusiastic about travelling as I am. You meet amazing people. We go on our own but we meet up with groups and we just love that because we meet loads of lovely people along the way and make loads of lovely friendships.”

And that, to June, is what life is all about.