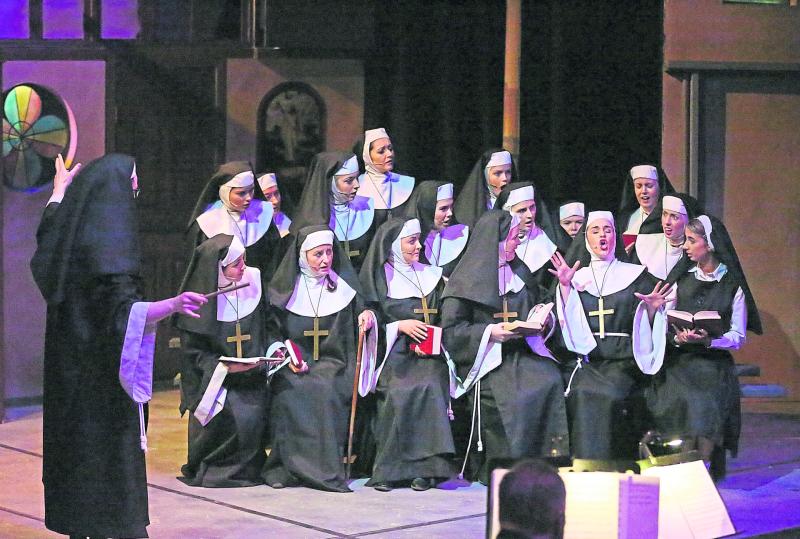 Deloris shocks the nuns with her singing voice during the choir practice scene in the first act of the show.

Tickets were sold out for weeks before St Mel's Musical Society's production of 'Sister Act' hit the Backstage Theatre - and with good reason.

Filled to the brim with talent and colour, this may have been one of the society's most popular and most spectacular shows yet.

The role of Deloris was made for an actress and singer like Longford's own Janice Gibney (Belton), who, despite injuring her leg in a particularly robust rehearsal a couple of weeks before the show opened, took to the stage like a moth to a flame and wowed the audience with her incredible dance moves and unbelievable singing talent - not to mention her spectacular portrayal of the popular character.

Paul Hennessy is no stranger to singing his heart out on stage, but in his role of Curtis, he got to put his acting skills to good use too.

And he didn't disappoint the Longford crowds. His portrayal of the gangster was impeccable and a perfect debut role with St Mel's Musical Society.

Valerie Nolan and John Kelly provided plenty of laughs in their roles as the Mother Superior and Monsignor O'Hara.

John Kelly is well known around Longford for his hilarious characters on the stage, and this year he certainly didn't disappoint.

Valerie Nolan, meanwhile, has a strong voice that holds the attention of the audience - and in her role as the Mother Superior, she ensured her performance wouldn't soon be forgotten.

Anthony Heavey deserves high praise for his performance in the role of Sweaty Eddie. Having played a number of small roles previously, it was great to see him take centre stage in this year's show.

It was the three goons who really stole the show with their hilarious wigs, those 70s outfits and the ridiculous walks each of them had adapted.

To top it off, they each have spectacular singing voices, with the surprising falsetto voice of Lorcan O'Brien really standing out to this Longford Leader reporter.

Then, of course, you had the nuns - each with her own distinct personality.

It's no secret that Maryann Lynch has an incredible voice and, in her role as the shy, young Sister Mary Robert, she really got a chance to show that off.

Dearbhaile Barrins was excellent as the joyful and hilarious Sister Mary Patrick, and her positivity beamed off the stage, bringing smiles to the faces of the audience.

Michelle Kelly Conlon brought on the laughs with her portrayal of Sister Mary Lazarus who was the hip nun in the convent - complete with bling, shades and a baseball cap in the second act.

Great credit goes to those in cameo roles and especially to the rest of the troupe who performed in the chorus, bringing that bit of extra joy and colour to the stage.

The second act was so bright and colourful thanks to the bright sequined habits the nuns donned as they performed their 70s-style numbers and worked their way towards a gig for the pope.

'Sister Act' was a spectacular show and really showed off the talents of those involved.

Every member of the cast and chorus added to the joy and colour that beamed off the stage.

The live orchestra made the whole show that much beter and great credit goes to the committee, all the crew, director Sean Power, choreographer Emer O'Brien, musical director Alan Recks, stage manager Eddie Kiernan and the rest of the crew.

St. Mel's Musical Society outdid themselves with 'Sister Act', celebrating their 40th anniversary since the revival in 1978. Who knows what they'll do next?