A taxi driver who kissed a passenger without her consent as she was collecting her bag from the car has been given a suspended sentence for sexual assault.

Father of four, Kusika Kudia (55) later admitted to gardaí in interview that he had kissed the woman without her permission but suggested she was “looking for a kiss”.

This was rejected by the woman, who said she went into “survival mode” after Kudia wrapped his arms around her and kissed her without her consent.

Kudia of Whitechurch Lawn, Ballyboden, Dublin 16, pleaded guilty at Dublin Circuit Criminal Court to sexually assaulting the woman outside her Dublin home on February 13, 2020. He is still working as a taxi driver.

“A person who is the holder of a public vehicle licence has a duty to be trustworthy and ensure members of the public can travel safely and be returned home safely,” she said.

She took into account a number of mitigating factors, including Kudia's lack of previous convictions and his early guilty plea.

She handed down a sentence of nine months and suspended it on a number of conditions including that Kudia remain under the supervision of the Probation Service for 12 months.

Garda Mark Paul told Elva Duffy BL, prosecuting, that the woman got into Kudia’s taxi with a friend following a night out in Dublin. Her friend was dropped off before she directed Kudia to take her to her home.

She said during the journey to her home she checked if he accepted card payment and when he confirmed that he did not, she asked to stop at an ATM to withdraw cash.

On her return to the taxi, Kudia asked her to sit in the front seat beside him rather than in the back seat as she had been doing.

She refused but Kudia asked her to move again. The woman later told gardaí that Kudia was not aggressive and spoke in a quiet voice but she continued to refuse to move to the front seat.

On reaching her destination, she got out of the car but went to the other side of the vehicle to make sure she had remembered all her belongings. She then noticed that Kudia had got out of the taxi.

The woman later told gardaí that he approached her and asked for hug and to “come back with me”. She refused but he wrapped his arms around her and “got a good hold of her”.

Once she realised that he had a strong hold of her she said “no in a meaningful way” and tried to elbow him but he pushed his face towards her and forced his tongue into her mouth.

The woman said she then went into “survival mode” and managed to get away from Kudia and get into her house.

Kudia was identified after gardaí secured CCTV footage of the friends getting into his taxi and he was traced as the registered user of the vehicle.

He was interviewed two weeks later and said he knew what the problem was. He accepted he had kissed the woman without permission but insisted he had not used his tongue.

A victim impact statement was handed into court but not read out.

Keith Spencer BL, defending, submitted to the court that his client’s livelihood is now in jeopardy.

He said Kudia came to Ireland in 1997 from the Congo. He obtained Irish citizenship in 2005 and began working as a truck driver until he got a taxi license in 2019.

He asked the court to accept that his client has no criminal history and he has never been accused of any similar behaviour since.

“It was a massive error of judgement. He accepts that he had no right to make the advance he did,” Mr Spencer said.

Gda Paul agreed with Mr Spencer that his client continues to drive his taxi and has never been accused of any such behaviour since. 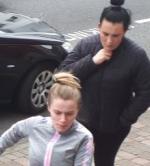 A pregnant woman, who along with a mother of two allegedly robbed an 86-year-old man in his own home, has been released from prison after her mother handed in €1,000 as part of her cash bail.