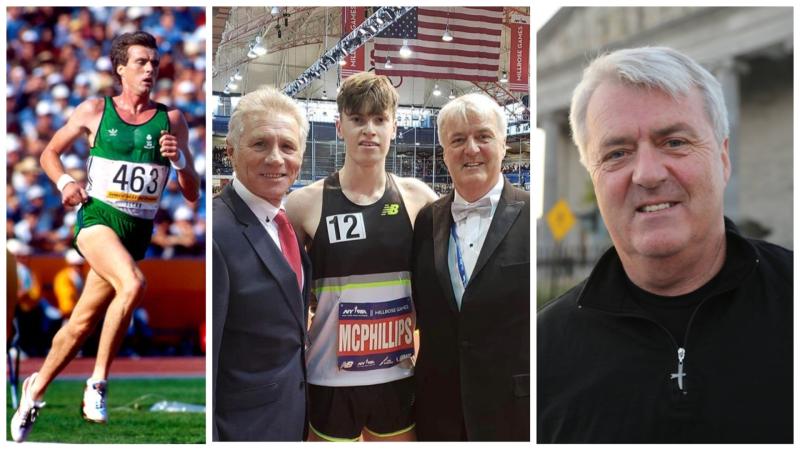 Ray Flynn during the 5000 metres final at the 1984 Los Angeles Olympics, with Eamon Coghlan, Cian McPhillips and Ray Flynn at the Millrose Games in February 2020 and at home in Longford

Soon after crossing the finish line at the Dream Mile on July 7 1982, exhaustion gave way to euphoria for Ray Flynn with the realisation that he had run the mile in under 3 minutes 50 seconds for the first time. Remarkably, his 3:49.77 remains the Irish record forty years on from that momentous evening in Oslo.

The Dream Mile has long been the highlight of the annual track meet at the Bislett Stadium in the Norwegian capital. Many of the world’s middle-distance stars over the years have raced at the venue seeking a fast time at the classic distance. It has been commented upon that reaching elite standard in the event requires the potent combination of a sprinter's speed and a distance runner's endurance. Add in to that the need for a tactically shrewd mind for racing and an ability to endure pain as intense muscle fatigue sets in over those crucial closing metres.

In 1982, Longford’s Ray Flynn was firmly established among the world’s elite. It was an era when the mile was arguably the most competitive and renowned of athletic events. American Steve Scott was the pre-race favourite and was looking to break Sebastian Coe's then world record of 3:47.33. New Zealand’s John Walker, another of Ray’s great rivals on the track, also went into the race in excellent form. In Oslo just two weeks previously, Ray had run a personal best time of 3:50. It was all set up for an intriguing contest over four laps of the 400-metre track.

The early pace was blistering with Scott’s compatriot Mark Fricker acting as pacemaker and leading the pack through halfway in 1:52. After completing 1200 metres, with one lap to go, the clock showed 2:51 with Walker, Scott and Flynn at the front and well clear of the field. The noise levels raised as the large local crowd knew they were watching something special and cheered the trio on. Scott moved to the lead with 300 metres remaining and Flynn followed. Down the home straight Scott powered clear to take the win as Walker moved past Flynn for the runner-up spot.

Although Scott’s winning effort of 3:47.69 was not enough to better Coe’s mark, it did improve upon his own US best time to set a national record which he would keep until 2007. Walker’s 3:49.02 and Flynn’s 3:49.77 remain national records for New Zealand and Ireland respectively.

A further measure of the quality of Ray Flynn’s run that evening is that his 1500 metres ‘split’ time of 3:33.5 still places him at the top of the all-time Irish rankings for the distance.

Ray has described it as the race he’s most proud of and rightfully so. Despite the grainy video footage on YouTube, one can clearly see the relentless tempo set from the start before that lung-busting final lap as the front three strained every sinew towards the finish line. This was an era for racing regularly on the athletics circuit and, just two nights later, Ray was back on the track for a race in Budapest. He hadn’t much time to dwell on his achievement for what was ultimately a career-defining run. 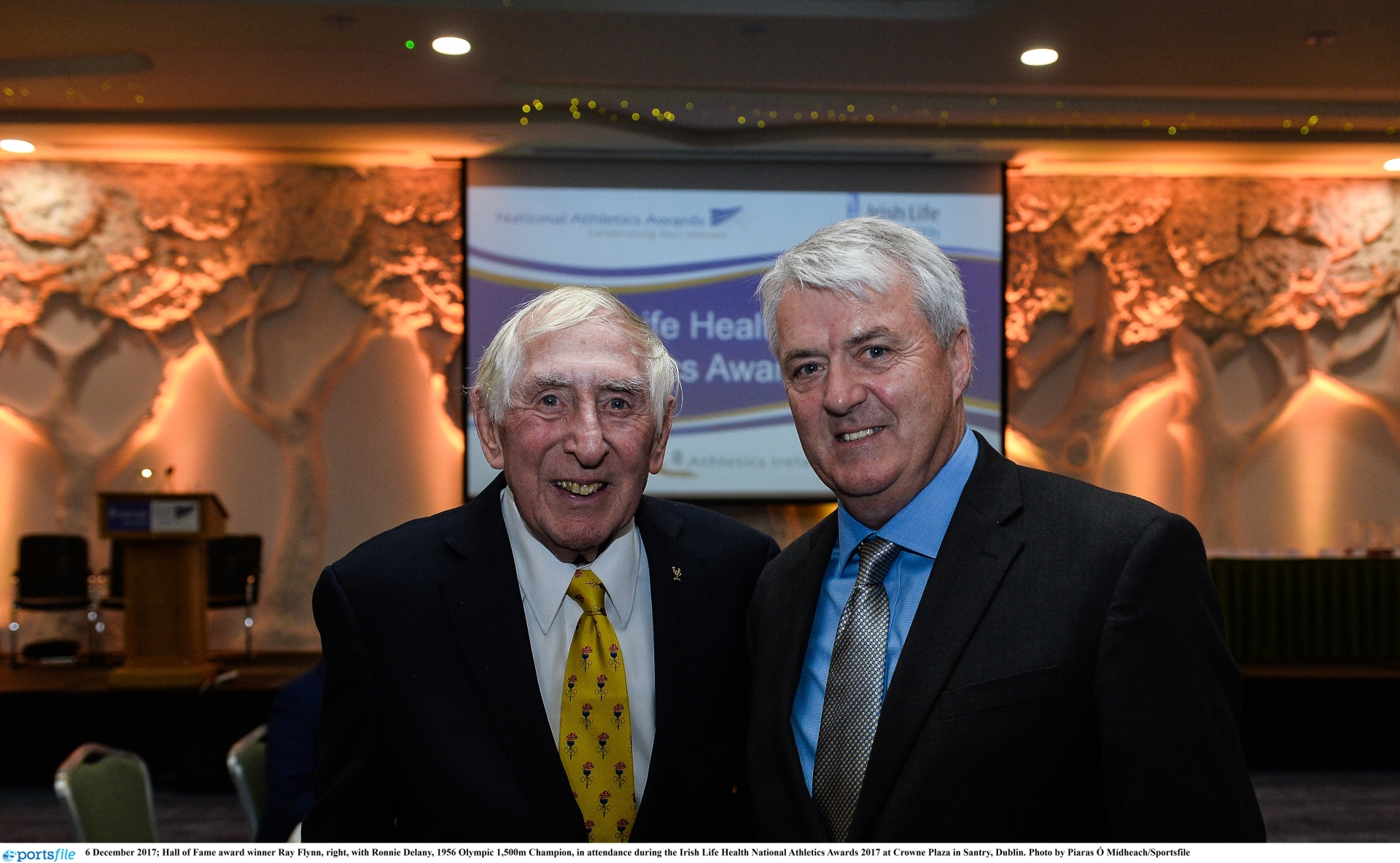 It was during his time as a student at St Mel’s College in the 1960s that Ray Flynn’s burgeoning talent as a runner was nurtured. Receiving support and guidance locally from among others Fr Peter Brady, PJ Quinn, Michael Wall and Ray’s father Paddy; Ray built up his strength running lap after lap of the Senior Field on the College grounds. The Dublin-based Brother John Dooley was also instrumental in coaching Ray to national and international success at track and cross country. Athletics in Longford was gaining interest during the period and Longford Athletics Club was founded in 1969 with Paddy Flynn as the club’s first Chairman.

In 1974, Ray moved from the family home on the Dublin Road to take up a scholarship at East Tennessee State University where he joined the ‘Irish Brigade’ of runners. The considerable Irish presence in Johnson City included Leitrim brothers Eddie and PJ Leddy and Mayo’s Frank Greally who would later go on to be the founder of Irish Runner magazine. Ray’s time at ETSU saw him attain NCAA All-American status, a highly regarded accolade in US collegiate sport, and he ran his first sub-4-minute mile aged just 20. The competitive NCAA scene prepared him well for the professional ranks. 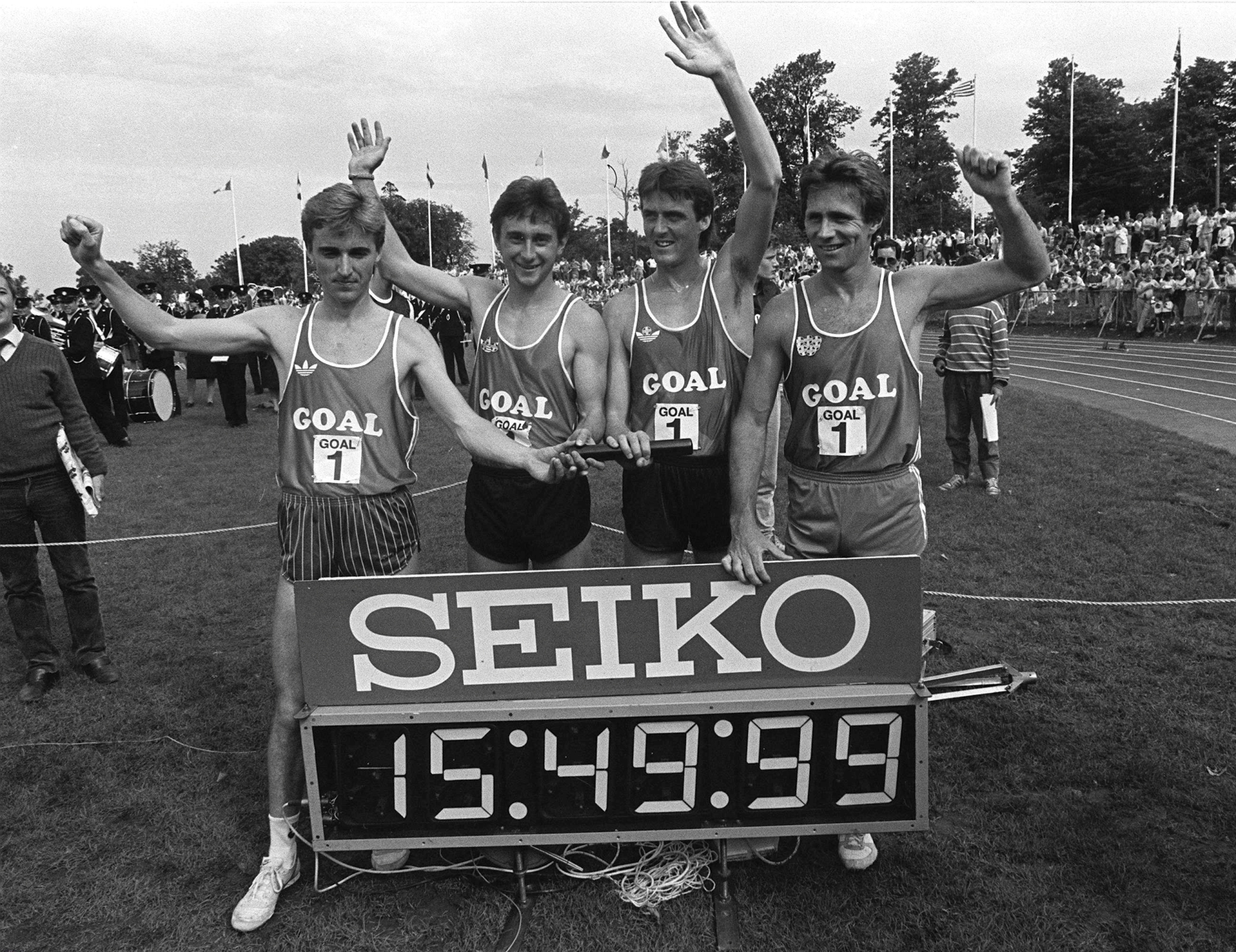 A two-time Olympian, he ran in Moscow in 1980 and four years later competed at the Los Angeles games where he was a finalist in the 5000 metres. Even with being US-based and racing so frequently on the American indoor and outdoor circuit, Ray took great honour in wearing the Irish singlet at major championships. A silver medal won in the 1500 metres at the 1980 European Indoor Championships in West Germany being one of the highlights during that period.

The 1980s saw Irish middle-distance athletes to the fore on the international stage. Another record which Ray can claim a major role in was the Irish team’s 4 x 1 mile relay world best of 15:49 set in 1985 at the Belfield track in Dublin. Ray had the task of completing the final leg for a team that featured the greats of Eamonn Coghlan, Marcus O'Sullivan and Frank O'Mara to set a record that still stands. 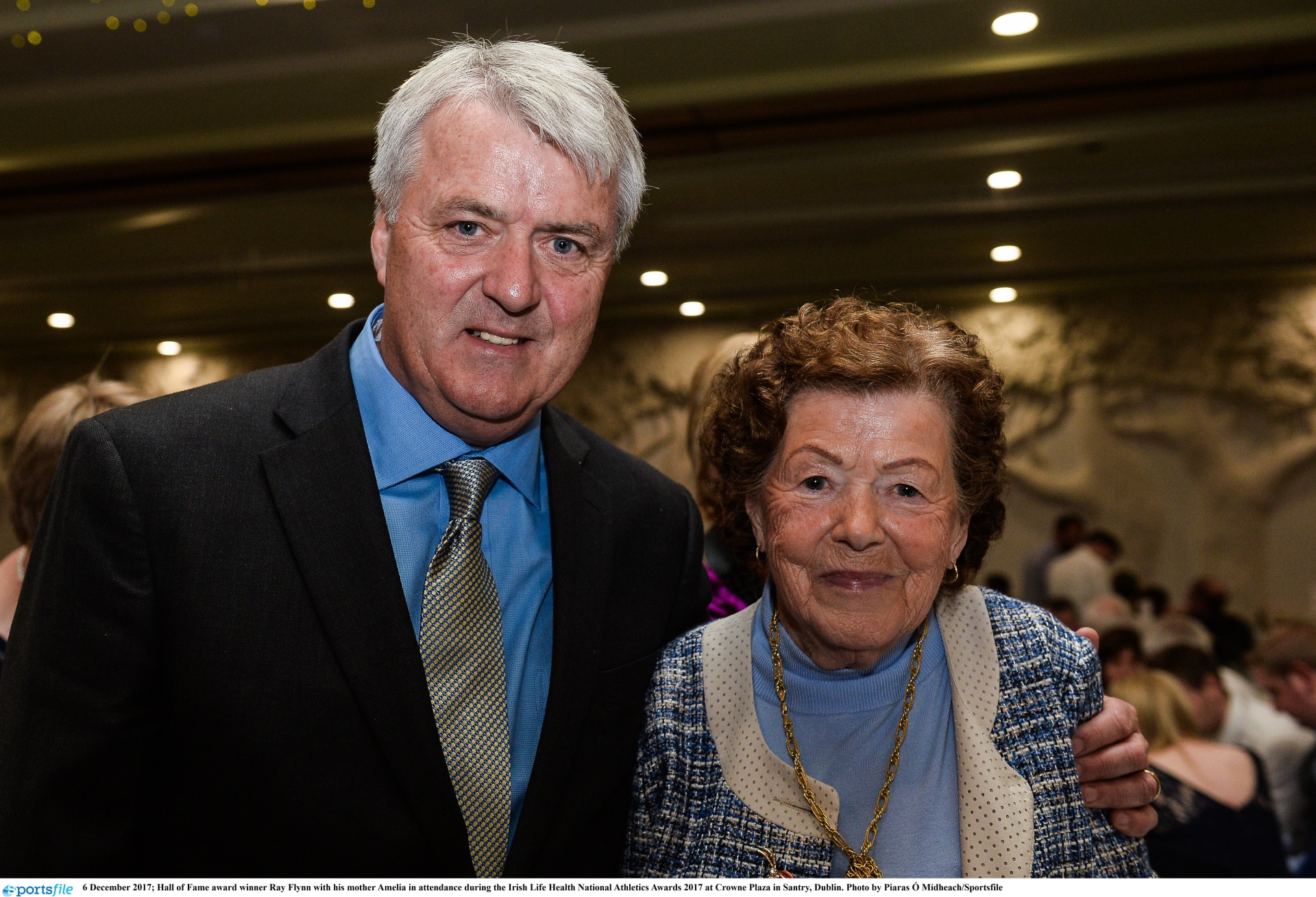 Athletic talents within the Flynn family weren’t limited either to just Ray. Martin Flynn, Ray’s younger brother, was also a very good runner whose national medal-winning performances for St. Mel’s College and Longford AC earned him a scholarship in 1983 to Clemson University, South Carolina. He later went on to record impressive personal bests including a four-minute mile.

Ray’s experiences on the circuit over the years led him to become an agent following the conclusion of his own competitive career. His company, Flynn Sports Management, which he runs from his home in Tennessee includes over sixty world-class athletes on its books such as Ireland's four-time Olympian Fionnuala McCormack. As Meet Director of the Millrose Games in New York, Ray has been very supportive of Irish runners taking part at the famed indoor event over the years. In 2020, Ardagh’s Cian McPhillips received an invite for the meet and convincingly won the Boys Mile race against some of the top US high school milers.

Forty years on from his career pinnacle at the Dream Mile and Ray remains the standard-setter for Irish athletes. Only fifty Irishmen, including another Longford man in Enda Fitzpatrick, have ever recorded a sub-4-minute mile. During his stellar career, Ray achieved the milestone a staggering 89 times.

Irish mile and 1,500 metres record holder Ray Flynn returned to his native county on Monday as he led over 100 runners through Longford town for a special event named in his honour.

Although the mile distance is not as commonly raced over anymore, the ‘metric mile’ of 1500 metres is the premier middle-distance event. Yet only two Irishmen have run within two seconds of Ray’s record since 2000. Even the likes of Coghlan, O’Sullivan and O’Mara all found the 3:33.5 clocking beyond them during their heyday. Only the Irish triple jump best, set in 1977, remains a longer-standing record in the men’s all-time national rankings. It would, however, be an event with significantly less participation than the 1500m which further emphasises the calibre of Ray’s 1982 feat.

It will be interesting to see how much longer the mile and 1500 metres records will last. The recent advances in running shoe design, the greater influence of sports science in improving athlete performance and even the evolution of faster running track surfaces may well soon contribute to someone ousting Ray from the top spot.

One factor that remains essential is that of hard work and no doubt there were many training miles run in the years leading up to that golden moment in Oslo. The current crop of promising young Irish runners emerging will likely challenge for his records but four decades at the summit is certainly a measure of the great athlete that Ray Flynn was. 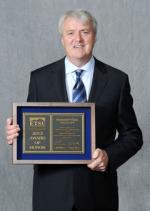 In 2014, Longford Town Council bestowed upon him the Freedom of Longford and he was inducted into the Longford Sports Partnership Hall of Fame at the Sports Star Awards in 2017. The Ray Flynn Mile, staged most recently in 2019, has been a popular event and it will return this September with Ray present on the evening. He has always maintained strong links to home. Ray married his wife Jan at St Mel’s Cathedral in 1986 with Fr Brady as celebrant. His best man was none other than John Walker. 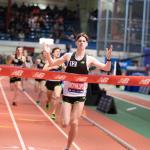 Athletics continues to prosper locally over fifty years on from the formation of Longford Athletics Club. Membership currently exceeds 400 with national and international success achieved by members in recent times.

In September, the Longford Athletics Centre opens following many years of working towards providing a top-class indoor athletics facility in the county. Ray has been a great supporter of the club and the project during this period. Appropriately, the building’s location is on the grounds of St Mel’s College where Ray’s running story began.