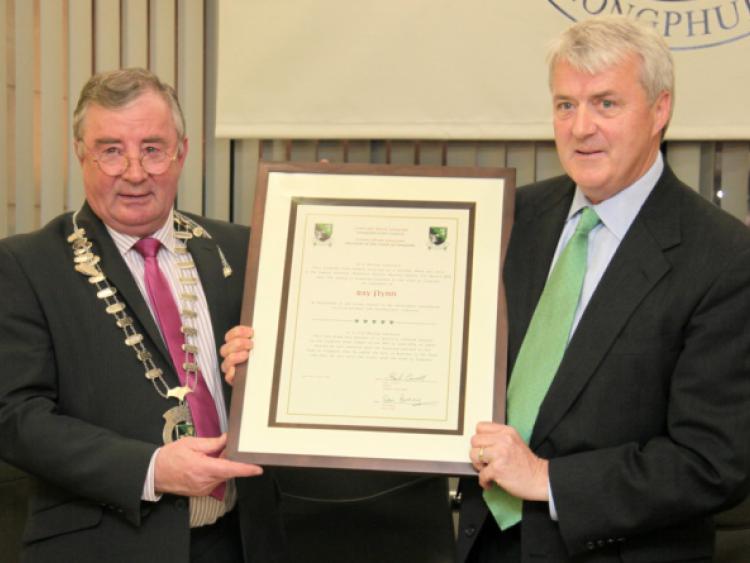 In his introduction, Town Clerk Dan Rooney explained that Mr Flynn was receiving the award for his “contribution to local, national, and international athletics”.

Fr Peter Brady - Mr Flynn’s mentor while he was taking his first steps into the world of athletics at St Mel’s College - also paid tribute: “He represented his country extraordinarly well... he was absolutely on fire.”

Accepting the award, Mr Flynn - who still holds a number of national and world records - said he was “very proud to be from this town,” and that “I am incredibly humbled by this award and I’d like to dedicate it to my family and friends who made such a difference to me growing up”.

Afterwards, former local TD Peter Kelly said, “We have in our midst a world-beater who never forgot his roots. I’m proud as a Longford person to be associated with the Flynn family.”

Ray Flynn holds the Irish records in the 1,500-metre and one-mile distances, both of which he set in 1982 at the Bislett Games in Oslo. Along with Marcus O’Sullivan, Eamonn Coughlan, and Frank O’Mara, he set a a world record in the 4 x mile relay event in 1985 which still stands. In addition, Mr Flynn represented Ireland at the 1980 and 1984 Olympic Games and ran almost 100 sub-four minute miles during his career.

The Freedom of Longford has only been awarded on eight occasions, with previous recipients including former Taoiseach Albert Reynolds, former President Mary McAleese, and Northern Irish politician and civil rights activist John Hume.