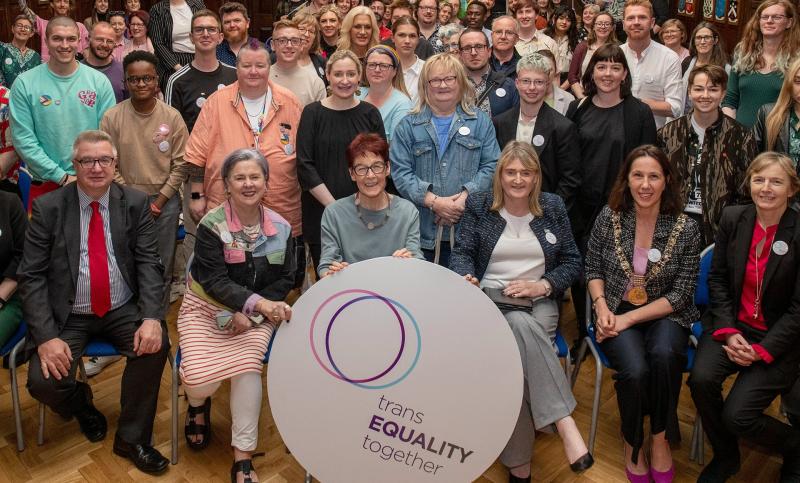 Groups in Longford — and around the country — are being encouraged to join a new coalition, Trans Equality Together, which launched recently.

Led by TENI (Transgender Equality Network Ireland), Belong To and LGBT Ireland, Trans Equality Together says its objective is to create an Ireland where trans people are “equal, safe and valued” as well as to:

Speaking at the launch, Sara Phillips, Chair of TENI and Co-Director of Trans Equality Together, said: “The aim of Trans Equality Together is to bring together the diverse array of organisations that work with the trans community directly and those that are our allies – to demonstrate to politicians, policymakers and the wider public the breadth of support that exists for trans rights and the challenges that we, as a community, are facing right now.”

Moninne Griffith, CEO of Belong To and Co-Director of Trans Equality Together, said: “Trans people in Ireland are a tiny minority of the population whose voices have rarely been heard in national discourse. They have been marginalised, denied access to healthcare, and demonised in the press.

“Trans Equality Together will work to create an Ireland where trans people are equal, safe and valued. We want to promote positive attitudes towards trans people, counter the negative and false messages that have been circulating in recent years, and work to achieve policy and legal changes – particularly in relation to gender recognition and healthcare – that will really improve the lives of trans people. We do not want to see the sort of divisive rhetoric and villainisation of trans people taking hold in Ireland that we have witnessed in other countries.”

Seeking Legislative and Policy Change
Trans Equality Together outlined its legislative and policy priorities at the launch. The coalition is seeking the explicit inclusion of gender identity, gender expression and sex characteristics as protected grounds in the Equality Acts, which are currently being reviewed by government.

Trans Equality Together also wants to see the gender recognition process opened up to include under-18s, and streamlined to remove the current requirements for 16 and 17-year-olds to attend court and present certificates from medical professionals in order to have their gender legally recognised.

In relation to healthcare, the coalition said the waiting list for adults seeking care through the National Gender Service is currently in the region of five years, and must be reduced as a priority. There has been no active health service for trans children and adolescents in Ireland since December 2020 and this must be re-instated with immediate effect, according to Trans Equality Together.

“In Ireland, we have demonstrated strong leadership on trans rights in the past. In 2015, we enacted the Gender Recognition Act, ensuring people over 18 can have their true gender recognised in law, based on self-declaration. This law was supported – without controversy – by a strong majority of Oireachtas members, and was greeted with widespread approval when it was introduced,” said Paula Fagan, Co-Director of Trans Equality Together.

“Now, we need to acknowledge and address the gaps that exist in relation to gender recognition for under-18s; and gender-affirming healthcare for people of all ages. Over the coming months and years, Trans Equality Together will be working closely with Oireachtas members and policymakers to highlight these gaps and ensure properly resourced services and supports are in place for Ireland’s trans community.”

A man has been fined €400 with five months to pay for behaving in an abusive manner towards his landlord after an eviction notice was served.

Trans Equality Together was launched at a special event at the Mansion House in Dublin, hosted by the Lord Mayor of Dublin, Alison Gilliland.

Today, we were proud to launch Trans Equality Together, an Irish coalition working to create an Ireland where trans & non-binary people are equal, safe & valued.

We're excited to work alongside all of our coalition members to promote trans rights in Ireland. pic.twitter.com/CnOMwCEmmr

Further information about Trans Equality Together, including about how groups in Longford can get involved, is available at www.transequalitytogether.com