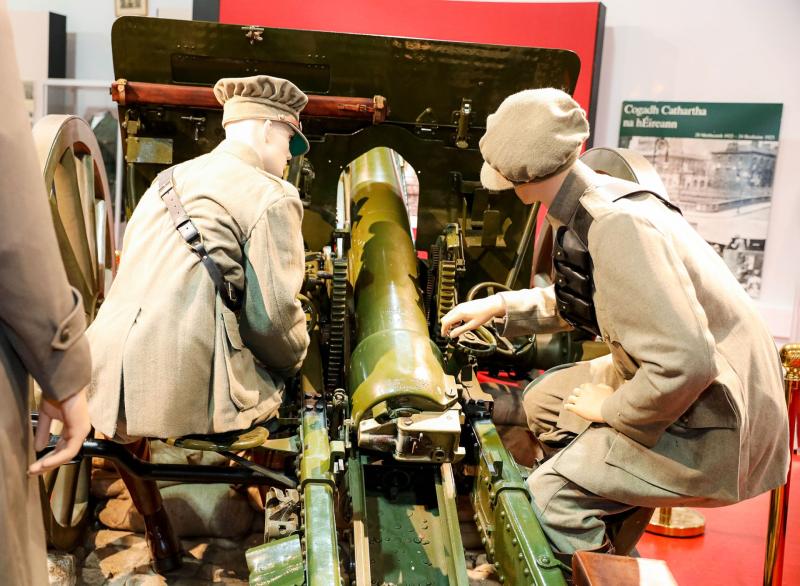 The current Decade of Commemorations project remembering events from 100 years ago has made the Curragh Military Museum more relevant than ever to visitors from home and away.

Many exhibits have taken on increased significance due to their indelible link with the past — such as the last Union Jack flag which flew over the Curragh Camp on the day of the official handover from British forces to the Irish Free State Army in May 1922.

The handover brought about the end of an era when the Curragh Camp was the centre of British military power in Ireland and home to 6,000 troops and 4,000 civilians in a mini-city with shops, cinemas, hospitals, bakery, an abattoir, schools and a prison.

The Museum has been extensively refurbished during Covid-19 pandemic and has many new displays which will enthrall many visitors for an hour or two.

The Curator of the Museum is Lt Col Des Healy and all the staff who manage the Museum are serving members of the Defence Forces and include Sgt Neil Sourke, Gary Rice, Chris Callaghan and David O’Hearne.

Private Rice provided a very comprehensive tour of the exhibits to the the Leader and his encyclopaedic knowledge was most impressive.

Lt Col Healy said: “The Museum is free to everybody. We’re not a national museum, we’re a local museum with strong links to the community.”

Lt Col Healy added: “The main theme of the Museum is the Irish Defence Forces from the founding of the Irish Volunteers through the War of Independence, the Civil War and through to modern times.

“The British left their footprint in local society, and it’s important that British history is also strongly represented in the Museum.”

The curator said he also wanted to highlight and acknowledge the generosity of families in donating treasured personal memorabilia to the Museum which can then be put on display and enjoyed by the general public.

He explained: “People trust the Museum with their precious family heirlooms. By donating them, they know that the objects will be treated with respect and care.”

The curator said: “The commitment of these staff is second to none and their enthusiasm is infectious to everybody who meets them.”

Local units of the Defence Forces in the Curragh Camp have also been very helpful in supporting the activities of the Museum, the Curator said.

Lt Col Healy pointed out that one of the major new displays recognises the important role of women in the Defence Forces and also showcases the uniforms of female soldiers.

A special event was also held in the Museum on International Women’s Day in March.

In terms of the existing exhibits, the famous Sliabh na mBan armoured car is one of several vintage vehicles on display and one of the most popular attractions.

The Rolls Royce formed part of General Michael Collins convoy which was ambushed and killed on August 22, 1922.

Other vehicles on display include the Comet Tank A34, a Churchill Tank, a Beaverette Mk IV Scout Car and a Panhard APC M3.

Weapons on display include the Brown Bess musket — one of the longest serving firearms in British Army service.

Also on display is an Irish Tricolour kindly donated by the family of General Sean MacEoin which was captured by the IRA leader from Auxiliaries whom he and his men ambushed in Clonfin, Co Longford in 1921.

The Chester Beatty Room, featuring dozens of weapons collected from all over the world, is one of the most visited areas of the Museum.

Also on display is a beautifully restored short grand piano which the Essex Regiment brought it to the Curragh in 1905.

Information:
The Curragh Military Museum is open Monday to Thursday from 10am to 3pm.
Admission is free and groups including school tours are welcome.
Contact 045 445342 for further information or email: curraghmilitary.museum@defenceforces.ie.