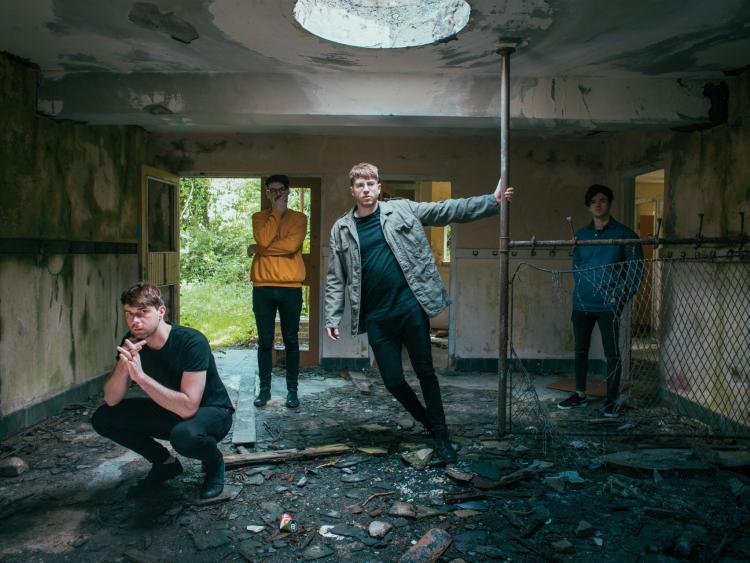 It’s been an incredible year for music in Longford with some of the county’s best talent taking steps towards stardom with epic single releases and incredible debut albums.

State Lights really came into their own in 2018 with the release of Peace Will Come and Freedom - both of which received an incredible response from fans.

Just like that, the bar was set for this unique band and the standard was incredibly high as they started into 2019.

Not that that was a problem for the talented group, who grasped the new year with both hands. They released their first single of the year, Lonely, in January and a new bar was set.

One of the band’s most unique and catchy songs to date, Lonely has more of a pop feel to it, and yet it keeps that trademark State Lights sound that fans simply can't get enough of - not to mention the unequalled voice of frontman, Shobsy (Shane O'Brien).

Sonically, Lonely is more experimental than any other State Lights song to date, with Granard man Joe Regan putting down his guitar to take up the piano instead.

The band also played around with some vocal effects like pitch-shifting and auto-tuning on Shobsy's voice to create the very unique and interesting refrain that makes the song so catchy.

“It was a very interesting musical journey to go on, but we couldn't be happier with how it sounds,” said Joe Regan.

“Lyrically, the song is from the point of view of someone experiencing depression, bordering on an existential crisis. In the past year, we became very much aware of the importance of mental health, both of ourselves and the people we care for most.

“It’s a topic of conversation that the whole world is starting to take part in more and more as each year passes.

“There’s been a stigma surrounding it for generations, especially in this country but, thankfully, through the work of many great organisations like Samaritans and Mental Health Ireland, that stigma has really been broken down.”

State Lights released their second single, Open Your Arms, in June, keeping that unique sound once more, while giving Shobsy the chance to show off his incredible vocals.

“It’s a song about empowerment. It’s about realising and having faith in your own ability to do anything if you simply open yourself up to the unique power that exists in each one of us,” Joe explained.

“It’s a super empowering, euphoric and joyful song in our eyes and we really hope people feel the same way about it.”

Here’s hoping for an equally successful 2020 for State Lights.

One of the newest and youngest bands to make waves in Longford is Rêves, fronted by former Painted Skies frontman Adam Fenelon, who has a unique and captivating voice that makes any band of which he’s a part stand out a mile from the competition.

Rêves started as a solo project for Adam, who did his Leaving Cert exams in June of this year. But it has since grown and now comprises six talented musicians, all of whom bring something special to any Rêves gig.

And a standout single release from the band is Depths & Between, which has received strongly positive reaction from numerous Irish radio stations, with 2FM even going as far as naming it Song of the Week.

“Depths & Between is a story about two people who grow apart over time,” Adam explained.

“It is more of an observation of others than a personal experience. I think it's very much the same for the rest of the record. I was inspired by how we as people deal with problems, what makes us happy, what makes us sad.

“I've been very lucky to experience some amazing gigs over the past year. I wanted to have a song that people could dance to and sing to without much effort as this is what makes a good show in my opinion and Depths & Between is very much that type of song and it's mega fun to play live.”

Drumlish lads Mick and Johnny Cronin have really put themselves out there over the years and have the honour of being close friends of Shane MacGowan and Johnny Depp.

In fact, the duo performed at the wedding of Shane MacGowan and Victoria Mary Clarke in November last year.

The latter song, with a perfect Autumnal feel is a taste of an ambitious project Cronin have for 2020. Watch this space.

Ballymahon woman, Katie Gallagher, has been on the up for the past number of years, releasing single after single and gaining traction in the Irish music world.

This year, she released her debut album, Searching For Magpies with Beardfire Music Production Studio & Label.

The album has received a hugely positive response from fans, due largely to Katie’s ability to switch from one genre to another, ensuring that this album has something for every music taste.

There’s also a great storytelling element to each song and a cracking tale about the album’s inspiration to boot.

“The album mirrors my total, irrational obsession with the old wives’ tale regarding magpies. And each song is linked to a line in that rhyme,” Katie explained.

The mission with this album, Katie explained, was to make every song embody a different vibe.

“From the moment I started this music journey, I always found it difficult to grasp the idea of being boxed into one genre. I hated it.

“The concept of sticking to one genre really blocked me from writing and creating music that I actually enjoyed performing.”

This album certainly shows that, she added, as every track is folk mixed with something else, from folk-pop in Don't Tell My Mother to folk-funk in Strawberries.

She tries to bring the listener on a journey through her brain and thoughts, all while hunting for that ever important pair of magpies.

Searching For Magpies is available on all major online platforms.

Perhaps the biggest music news in Longford this year was the highly anticipated debut album of one of the best bands to come out of the midlands in recent years.

Never a band to forget their roots, the lads launched the album with a sold out, intimate Backstage Theatre gig, where they performed the album live for the first time.

“We wanted to have our first gig at home in Longford where people have been so good to us. The people of Longford have gotten us this far,” he added.

“They deserve to hear it first,” Podge Gill agreed.

“It’s heartwarming to think that any time we come back to any gig in Longford, it’s one we remember fondly.”

The album itself is a gift to the ears from beginning to end and is very different to what they’ve done in the past.

“There are new themes in the songwriting that have been explored. There are a lot of new sounds as well. We brought in even more influences from genres of music that we’re listening to at the minute.

“But all the while, I think we have kept that core Brave Giant sound. The initial stuff that we were into.”

We feel it suits our personalities and our growth as people and musicians probably a lot better than our old stuff,” added Mark Prunty.

“Obviously that old stuff suited us back then, but our growth as musicians is kind of represented a lot better in these songs.”

The album covers a lot of new themes from love and loss to isolation and anxiety, hope and relationships, all of which fit into the band’s vision of the album and the colours white, pink and blue.

“Blue is the darkness and isolation, leading to the pink and the white and that’s the hope,” Ross McNerney explained.

“The name of the album - every song with every theme can be put into one of those colours and that’s why it’s called White Pink + Blue.”

Musically, the band has been experimenting with a more electronic sound, while also collaborating more on each individual song.

“Songs before this were very much one person writes the song, brings it to the group and we’d tweak it a bit and you’d more or less put your instrument on top of it and that was it,” said Mark.

“With these songs, there’s definitely a lot of chopping and changing from other people in the band; co-writing lyrics; co-writing melodies.

“And they fit very well together. Even when we were doing the track listing, we just liked the progression of tracks and creating a wave of up-tempo, down-tempo or emotion. We’re happy with how they fit together.

“We’re very proud of this album as a whole thing and we’re happy to call this our debut album. There’s a reason we’re putting all of these new tracks on our debut album. All those tracks that we released up to that are very important to us, but we’ve progressed and evolved,” he added.

If you haven’t got the album yet, it’s available via all online platforms or can be purchased in Denniston’s, Longford on CD and vinyl. But if you get the chance to see them perform it live too, grab the opportunity with both hands. You won’t certainly regret it.