‘The people of Longford have gotten us this far’: Brave Giant to release debut album

White, Pink + Blue album tour to kick off in the Backstage Theatre 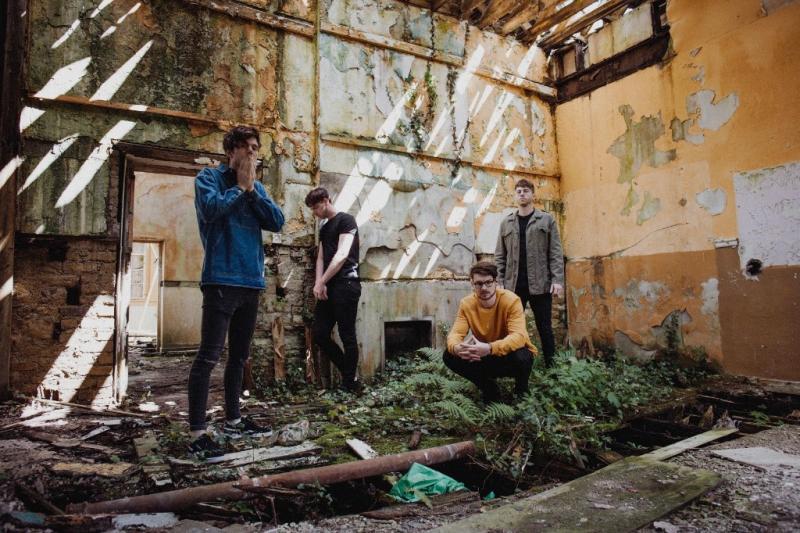 When a band as big as Brave Giant starts playing a set of new tracks, it’s understandable that they'd be a little apprehensive about how it will go down with their fans. But as the crowds gathered at the Marquee in Drumlish recently proved, anything performed by Brave Giant is going to go down well.

The lads have been working hard this year to record their debut album, White, Pink + Blue, which will be released in October and, as they say themselves, it’s very different to what they’ve done in the past.

“We’re kind of taking things in a new direction,” drummer, Emmett Collum explained as he sat with his three bandmates at Longford Leader HQ recently.

“There are new themes in the songwriting that have been explored. There are a lot of new sounds as well. We brought in even more influences from genres of music that we’re listening to at the minute.

“But all the while, I think we have kept that core Brave Giant sound. The initial stuff that we were into.”

“We feel it suits our personalities and our growth as people and musicians probably a lot better than our old stuff,” added Mark Prunty.

“Obviously that old stuff suited us back then, but our growth as musicians is kind of represented a lot better in these songs.”

The album covers a lot of new themes from love and loss to isolation and anxiety, hope and relationships, all of which fit into the band’s vision of the album and the colours white, pink and blue.

“Blue is the darkness and isolation, leading to the pink and the white and that’s the hope,” Ross McNerney explained.

“The name of the album - every song with every theme can be put into one of those colours and that’s why it’s called White, Pink + Blue.”

Musically, the band has been experimenting with a more electronic sound, while also collaborating more on each individual song.

“Songs before this were very much one person writes the song, brings it to the group and we’d tweak it a bit and you’d more or less put your instrument on top of it and that was it,” said Mark.

“With these songs, there’s definitely a lot of chopping and changing from other people in the band; co-writing lyrics; co-writing melodies.

“And they fit very well together. Even when we were doing the track listing, we just liked the progression of tracks and creating a wave of up-tempo, down-tempo or emotion. We’re happy with how they fit together.

“We’re very proud of this album as a whole thing and we’re happy to call this our debut album. There’s a reason we’re putting all of these new tracks on our debut album. All those tracks that we released up to that are very important to us, but we’ve progressed and evolved,” he added.

The continuity of the album is one of the things that will make it so appealing to fans. All of the songs have a sort of uniformity to them that makes listening to this album as a whole an experience in itself.

One of the most important parts of making this album, the lads all agreed, was producer Gavin Glass, of Ophan Recording, who encouraged them to be themselves.

“He just got exactly what we were trying to do with the sound and everything and just let us express ourselves as musicians,” said Podge.

“We came away out of the studio feeling ten feet tall that week because he encouraged us to do this and that.”

“He pushed our limits a little bit but he got the best out of us,” Mark agreed.

“He wanted our stamp on the album, which was nice because a lot of producers that you could work with, you’d hear them saying ‘I think this, I think that’.

“He was obviously giving his own opinion but a lot of the time he was getting the best out of us.”

“And then when we go to do it live, we know we can do it, because we did it ourselves in the studio,” Podge laughed.

“As a band, it’s very important that you can play it live!”

And that’s exactly what they’ll be doing when they set off on their White, Pink + Blue tour in October, which will cover Limerick, Galway, Cork and Kerry to name a few - and with more dates to be announced.

The tour will finish up with an almost sold out Olympia Theatre gig on November 9 - tickets for which are on sale via ticketmaster.ie.

Most importantly for local fans, the tour will be kicking off on October 6, with a very special, very intimate home gig in the Backstage Theatre, giving the people of Longford the chance to hear the album live before anyone else.

“And now that we’re releasing an album, we wanted to have our first gig at home in Longford where people have been so good to us. So I think it’s important to start our tour in the Backstage Theatre and finish it in the Olympia.

“And Backstage is a different show to every other show in the tour,” he added.

“It’s way more intimate. It’s sit down. There’s more story telling. You actually won’t get the same gig in any other venue on the tour. It’s going to be a very exciting weekend to have an album out and have a hometown gig where people will be the first to hear the album live.

“The people of Longford have gotten us this far.”

“They deserve to hear it first,” Podge agreed, adding that the crowd at the Marquee in Drumlish really showed how much support the band really has in Longford.

“It was amazing to stand in the marquee in Drumlish and just have everybody roaring. It’s heartwarming to think that any time we come back to any gig in Longford, it’s one we remember fondly.”

Brave Giant’s album White, Pink + Blue will be on release from Friday October 4 across all digital platforms. The album will also be available to buy on CD and Vinyl - including at the band’s album launch show concert at the Backstage Theatre on October 6 and all good retailers nationwide.

The album is being distributed by Warner Music in Ireland.

Tickets for the Backstage Theatre gig will go on sale HERE, or can also be booked via the theatre box office or 043 33 47888 from 10am, Friday, September 6.

Keep up to date with other tour date announcements via @BraveGiantOfficial on Facebook.