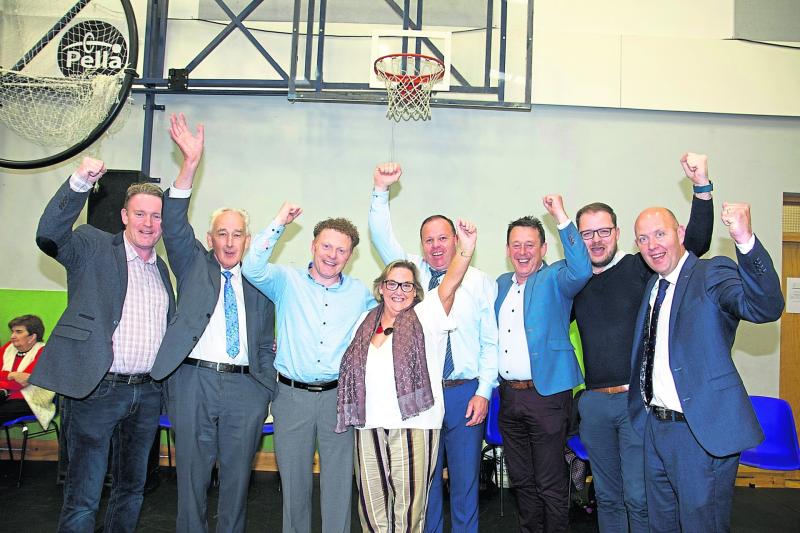 It lasted four days, brought with it a recount and the introduction of three new councillors and the likely return of Fine Gael to the top table of Longford County Council.

Election 2019 unquestionably had it all. In a strikingly ironic throwback to its gruelling 2016 ‘Siege of Kenagh’ general election equivalent, it was a democratic process which threw up as many surprises as a Paul Daniels magic show.

One of the chief orchestrators behind that display of political wizardry was the breathtaking performance of Turlough ‘Pott’ McGovern.

The Independent Granard based farmer had been widely talked about as being a possible fly in the electoral ointment to the county’s two largest parties, Fine Gael and Fianna Fáil.

Not even the most seasoned of political commentators could have foreseen what was to come, however, as the sports mad community activist not only claimed a seat but topped the Granard electoral area poll in the process.

It was an extraordinary performance and one the man himself struggled to quantify, describing the feat as “a quare thing” but one which did not come about by accident.

The collapse of the Fianna Fáíl vote in what has perennially been viewed as a stronghold for the party was arguably one of the election’s chief talking points.

On a weekend which saw it retain its billing as the predominant party in local government across the country, it was otherwise a past few days to forget for senior strategists and officials.

The opposite was the case for Fine Gael as it took home over 46 per cent of the vote, the highest district in the country.

Sinn Féin, like five years previously when Mullinalaghta's John Reilly polled extremely well, will be mulling over what might have been as both Tena Keown (Longford) and Mark Maguire (Granard) saw their hopes come up short.

In Longford, one of the most eye-opening surprises was the decision of voters to stay away with just 55 per cent of its electorate choosing to exercise their democratic mandate.

Read also: Low voter turnout in Longford municipal district as just over half the electorate has its say

Fianna Fáil’s Joe Flaherty led from the front, securing re-election on the first count. He was joined on Monday night by outgoing Cllr and group leader Seamus Butler as well as first time candidate Martin Monaghan.

The GAA central council delegate was unable to cast a vote for himself after switching from the Granard to mid Longford area as Fine Gael chased its pre-election target of nine seats across the county.

That success, allied to the solid vote getting exploits of John Browne ensured the main government party, led locally by Director of Elections Sean Farrell, did just that.

It was a feat which also brought the curtain down on Independent Cllr Mae Sexton's long and distinguished career at local authority level.

A polished and well respected politician, Cllr Sexton was always playing catch up with her nearest rival, Fianna Fáil's Martin Monaghan when the first tallies emerged on Saturday evening.

It was also a departure which ensured the Council was left with the solitary female voice of Cllr Nolan on its new look make-up.

The only remaining district up for decision by the time of going to press was that of Ballymahon.

And, unlike its other two local electoral areas, it was very much a case of as you were with all six outgoing councillors looking set to be safely returned.

As had been widely anticipated, Legan based Councillor Paul Ross saw off all-comers, topping the poll with a huge 1,217 first preference haul.

Independent Cllr Mark Casey was not far behind on 995 as he too crossed the finish line on the first count.

By the early hours of Tuesday morning, no definitive outcome had been gleaned over the district's four remaining seats.

A decision to adjourn counting until late yesterday morning led to more drama when Independent candidate Tony Moran called a recount after he was eliminated on the sixth count.

The Kenagh community activist exited the race after it emerged his 448 first preference share was inferior to those of Fianna Fáil's John Kenny who returned with an identical number of votes.

Whatever the outcome, it appeared likely Fianna Fáil's Mick Cahill and Pat O'Toole would easily hold onto their seats and be joined by Colm Murray and Gerard Farrell of Fine Gael.

In the midst of those questions, all eyes will now be firmly fixated on who, and, which party will hold sway within the confines of the county council chamber between now and 2024.

Fianna Fáil officals, no doubt, had been keeping their fingers crossed that a relatively respectable seat return would enable the party to extend its agreement with the local authority's three Independent representatives for another five years at least.

However, as the age old adage goes and as one senior party source said on Tuesday: “Politics is a numbers game”.

Murmurings over a pre-election deal already having been signed off on and reported by the Leader over the weekend certainly caused some controversy.

Among those to speak out was long serving and unsucessful candidate Frank Kilbride who announced his resignation from the party, vowing to “never stand for Fine Gael again”.

Read also: Kilbride to 'walk away from Fine Gael for good' and run as an Independent General Election candidate

And while Mr Kilbride also declared his intention to run as an Independent general election candidate going forward, it looks decidedly likely the party will shake hands on a deal with the council's newly installed Independent representatives over the coming days.

“Nearly 80 per cent voted either for Fine Gael or Fianna Fáíl.

“It's up to us, as councillors, to form the strongest council possible and to work for the betterment of all the people of this county.”

Wise and thought-provoking words they may be, they are ones Longford's 40,000 or so citizens, no doubt will be hoping comes to pass over the days and weeks ahead.