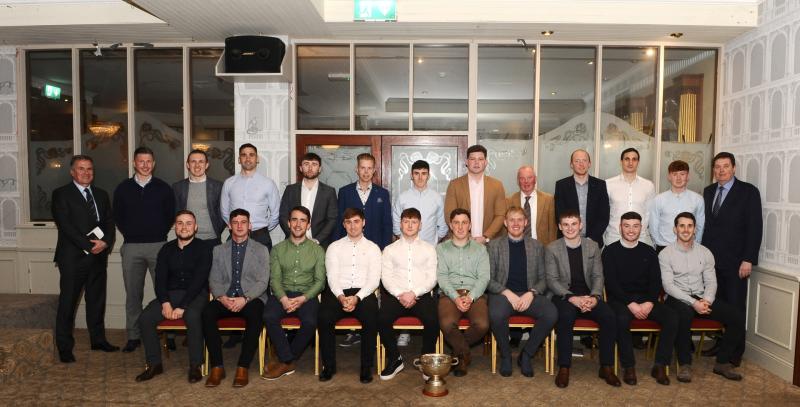 ‘A Meet and Greet’ event planned for February 2020 fell foul of Covid-19 restrictions and all were delighted to be able to acclaim the heroes of past and present last Friday week, with the 2020 squad being presented with their medals.

Longford suffered the agony of a single point defeat against Kildare in Round 2 of the TG4 Ladies Football Leinster Intermediate Championship at the Monaduff grounds, Drumlish on Sunday last.


Longford GAA Chairperson Albert Cooney described the O’Byrne Cup Final win over Offaly in 2020 as ‘a great success’ and he congratulated the players and backroom team, led by manager Padraic Davis.

He said it was great to see so many of the 1965 and 2000 O’Byrne Cup winning panels in attendance and he thanked those players for moulding and contributing to the success of Longford GAA.

Croke Park Stadium Director Peter McKenna congratulated the Longford 2020 squad and said their win over Dublin in the semi-final gave him great bragging rights around the corridors of Croke Park. “Well done to all of the team.”

Mr Teehan remarked, “It can be said that the modest successes of small counties, when compared to that of their larger counterparts, are borne out of greater commitment, dedication and loyalty.

"In fact fidelity to the GAA, and its ideals, have never been measured by championship success and in this respect one must look beyond the statistics of the Roll of Honour to assess Longford’s place in the story of the Association.”

He added, “Your contribution to GAA administration at Provincial and National level, with men like Liam Mulvihill, Albert Fallon, Martin Skelly and John Greene has to be acknowledged. It is also worth noting your contribution to refereeing at inter-county level, where you have supplied numerous referees to the National stage and in particular the achievement of John Bannon in taking charge of two All-Ireland Senior Football finals and one minor and Fergal Kelly in being in the man in the middle for Minor and U21 All-Ireland Finals is worth noting. And in Offaly we’re eternally grateful to Longford man Eugene McGee.”

Mr Teehan said he was also delighted to be present for the launch of ‘The Gaelic Field’, adding, “As a former PRO, this is my kind of book – a unique publication which captures the growth of GAA facilities in Longford since the GAA’s inception.”

He continued, “On occasions like this we often contemplate on how it all began? Perhaps in the case of many of the clubs it may well have been when two young people got together to kick the ball against the wall of a house or perhaps it was at the local crossroads where they were joined by other local lads. Then one day it was found that there were enough to form a team. For whatever reason, a GAA club was founded, it has provided a fantastic local service and leadership to the young and not so young in the area.”

Longford PRO Gerry Forde was MC for the occasion with the 1965 players being introduced by Martin Skelly, the 2000 players by TJ Ward (who was also a selector) and the 2020 panel were introduced by County Secretary Peter O’Reilly.