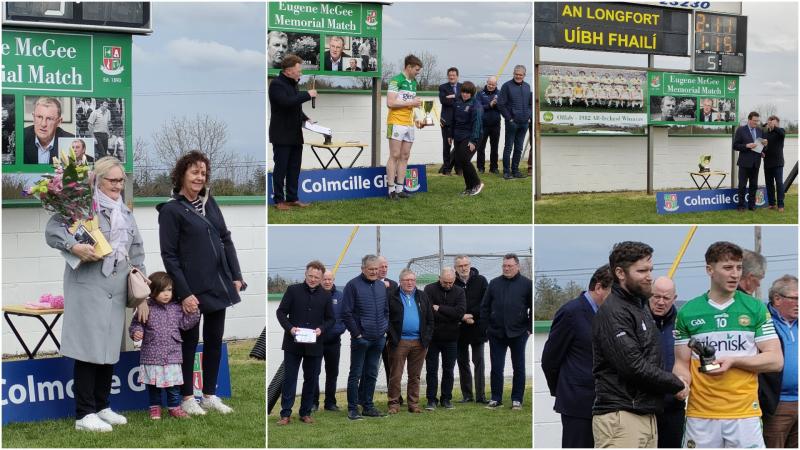 Ahead of their April 30 Leinster quarter-final against Westmeath, the Longford senior footballers had a decent workout on Sunday as they succumbed to Offaly by a single point, 2-11 to 1-15, in the Eugene McGee Memorial Match at Fr Phil McGee Park, Aughnacliffe.

Forty years ago, the same counties met to mark the official opening of Colmcille’s excellent venue, with the late Eugene bringing his Offaly charges up to his native parish just a few weeks prior to their famous win over Kerry in the All-Ireland Final.

Sunday’s tournament match was a fitting tribute to Eugene's memory. His wife Marian, son Conor and daughter Linda were all present along with several members of the 1982 All-Ireland winning squad, including captain Richie Connor, Tomas O'Connor, John Guinan, Stephen Darby, Seamus Darby and others. Some of them had come up the previous night while GAA President Larry McCarthy and Leinster Council chairperson Pat Teehan added to the sense of occasion with their presence.

Colmcille underage players applauded John Maughan’s Offaly players onto the pitch and they began brightest, racing 0-4 to 0-1 ahead inside 12 minutes. Anton Sullivan, Ruairi McNamee (2) and Bill Carroll were on target with Longford’s sole riposte coming in the 6th minute from Darren Gallagher.

Michael Quinn and Oran Kenny added further with points for Billy O’Loughlin’s Longford, before Bill Carroll made it 0-5 to 0-3 in Offaly’s favour. Longford ‘keeper Paddy Collum produced a decent save to deny Bernard Allen and at the other end Iarla O’Sullivan’s effort was tipped around the post for a ‘45 by Ian Duffy.

Anton Sullivan scored twice for the Faithful and Dylan Farrell (free) stroked over Longford’s 4th point, 0-7 to 0-4. Diarmuid Egan scored Offaly’s 8th point before Longford hit 1-2 without reply to go in front. Jayson Matthews and Dylan Farrell (free) raised white flags and sandwiched in between Darren Gallagher showed just how a penalty should be taken as his strike flew to the top corner of the net.

Longford resumed impressively with Dessie Reynolds getting a point and defender Patrick Fox grabbed a goal after he was on the end of an enterprising move and his dipping shot brushed the crossbar and crossed the line, 2-7 to 0-9. Offaly rallied with points from Dylan Hyland and Bernard Allen (free), 2-7 to 0-11, and over the next ten minutes Longford held the upper hand in terms of possession but for all their endeavour their only reward was an Oran Kenny point, 2-8 to 0-11.

Between the 49th and 52nd minutes Offaly racked up 1-2 with Cathal Flynn and the wily Niall McNamee on the mark. McNamee converted a free and squeezed a penalty beyond Micheál Hughes to put Offaly 1-13 to 2-8 ahead. Gallagher pulled a point back for Longford but Offaly made it 1-15 to 2-9 courtesy of Carl Stewart and McNamee (free).

Longford required a goal to salvage a draw but it failed to materialise and they ended the tie with late points from Colmcille’s Fergal Sheridan on his home pitch and the ever industrious Gallagher.