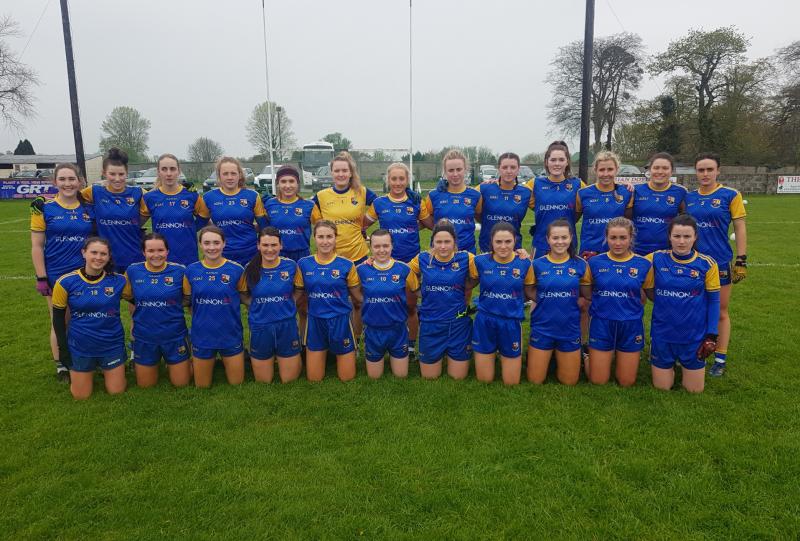 The Longford ladies football squad pictured prior to their 4-10 to 1-9 victory over Carlow in the opening round of the TG4 Leinster Intermediate championship last Sunday in McGrath Park, Bagenalstown

A five minute spell where Brian Noonan’s Longford charges could do nothing wrong decided this LGFA TG4 Leinster Intermediate Championship group B opening round game in McGrath Park, Bagenalstown on Sunday.

Just after half-time the Longford girls scored 3-2 without reply, going 3-10 to 0-6 ahead, and this finished the game as a contest.

It was a killer blow for the home side to endure but Carlow showed character in abundance by not dropping their heads.

In the 25 minutes that were remaining, they outscored Longford by 1-3 to 1-0.

Next up for Longford is a very tough home tie against Kildare next Sunday in Monaduff.

The Lilywhites were 5-8 to 3-7 winners over Wexford on Sunday and when Longford and Kildare met earlier this year in the Lidl Ladies Football National League Division 3B, it was Kildare who emerged as 2-11 to 2-5 winners in Killoe.

Longford's third Leinster TG4 Intermediate Championship Group B game is away to Wexford on May 1, with the top two counties in the group qualifying for the semi-finals fixed for May 8.

The final is on May 15 and the All-Ireland Championship begins shortly after this.

Longford started the first half as they started the second but not with the same lethal effect. Points from Grace Shannon, Emer Heaney and Lauren McGuire (free) asked questions of Carlow who replied with scores from Sarah Doyle and Dannah O’Brien.

As Longford added to their total courtesy of Louise Monaghan, Kamille Burke and Niamh Brady, they found themselves five points up at one stage, 0-7 to 0-2. Carlow, however, kept themselves in the game and a long-range score by Aoibhinn Gilmartin underlined their challenge.

Some tremendous Carlow defending saved what looked likely to be a Longford goal and lifted by this intervention the home side went in trailing 0-8 to 0-6 at the interval.

A point apiece from Kamille Burke and Grace Shannon stretched the Longford lead out to four points, 0-6 to 0-10. Then disaster for Carlow as they conceded three quick goals in succession.

First, Michelle Farrell scored a penalty and Burke followed up with her side’s second three-pointer. From the kick-out, Longford swooped again and Clodagh Lohan tipped in with her finger-tips as Carlow buckled, 3-10 to 0-6, with 35 minutes elapsed.

Credit the home side. Heads didn’t drop. Ellen Atkinson led by example competing for every ball and forgetting her side trailed by a staggering 13 points. Niamh Kelly looked for the ball time and time again and she had great support from Antoinette Dowling, Nuala Mohan and Ruth Bermingham. Up front, Rachel Sawyer may not have scored in this game but she was a constant thorn in the Longford full-back line.

Carlow kept their shape in that final quarter and found points through Dannah O’Brien. When Sawyer was fouled, Niamh Kelly converted the penalty as she expertly placed the ball in the bottom left-hand corner of the net beyond Longford ‘keeper Ruth Jones.

Kelly almost scored a second goal but had to settle for a point when her first time shot flew over the crossbar. That came about when Sarah Doyle ran at the Longford defence with purpose.

At the end Longford hit back and Emer Heaney placed the ball just inside the right hand post for her side’s fourth goal of the second half.

The ten-point margin at the end didn’t reflect the Carlow effort. Managers talk about attitude and performance. This, Carlow had in spades.