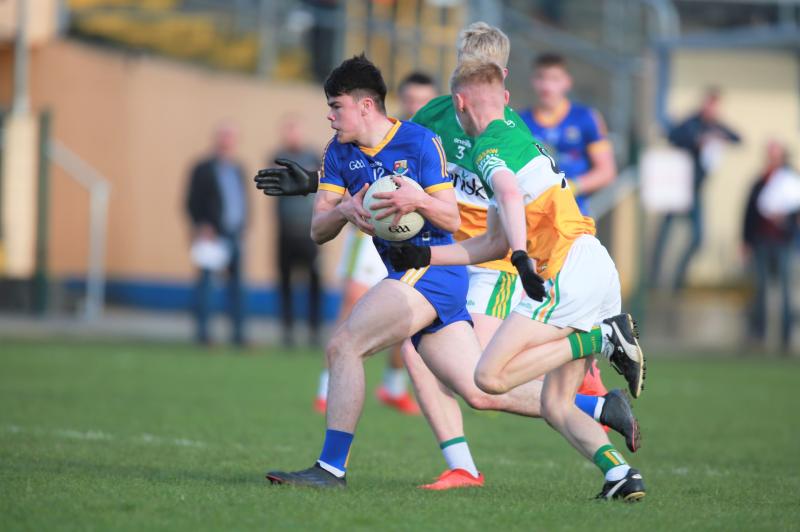 Impressive Longford booked their place in the quarter-finals of the Electric Ireland Leinster Minor (U-17) Football Championship after they crushed Offaly by nine points, 2-11 to 0-8, in this group two round three encounter at Glennon Brothers Pearse Park this evening.

With both counties having overcome reigning All-Ireland champions Meath in earlier round matches, both were assured of knockout football.

Longford’s victory gives them a May 4 quarter-final date, while Offaly have to be content with an April 27 preliminary quarter-final tie against Carlow. Kildare, as the group two winners, advanced to the May 11 semi-finals.

The Lilywhites defeated both Longford and Offaly and at the time of writing, they were comfortable 2-12 to 1-10 winners over Meath this evening. You can see the full Electric Ireland Leinster Minor (U-17) Football Championship draw HERE

Longford trailed by 0-4 to 0-6 late in the first half, but there then followed a devastating spell where they racked up 2-5 without reply, putting them 2-9 to 0-6 ahead with 49 minutes elapsed and it was game over.

Michael Flynn and Harry Kiernan dispatched the goals and their predatory instincts allied to the strength and accuracy of Matthew Carey and Jonathan Burke provided Offaly with a host of headaches.

Longford began promisingly and they established a 0-3 to 0-1 advantage by the 11th minute as Jonathan Burke, Andrew Flynn and Ross Shields were on target for Gareth Johnston’s side, with Niall Furlong (free) scoring for the Faithful County in the 6th minute.

Longford ‘keeper Caolan Hussey also had to be alert during those early minutes and he made a vital intervention to deny Offaly a goal.

Points by Ben Kennedy (free) and Donal Shirley helped Offaly get back on level terms, 0-3 apiece by the 18th minute, and they edged ahead two minutes later courtesy of Cillian Bourke.

Longford captain Matthew Carey grabbed the equalising point, 0-4 all, before Offaly regained the initiative thanks to scores by Niall Furlong (free) and Donal Shirley, 0-4 to 0-6 after 27 minutes.

Longford ended the half with a Harry Kiernan point, thereby leaving the minimum separating the teams at the break, Longford 0-5 Offaly 0-6.

Two minutes after the restart, matters were on level terms for the third occasion as Longford’s Matthew Carey bisected the uprights once again and he put his team ahead following a well executed 38th minute mark. His Clonguish club mate Michael Flynn quickly tacked on another point and this gave Longford, who were flying it at this stage, a 0-8 to 0-6 lead.

Jonathan Burke registered Longford’s 9th point in the 45th minute before the home side landed two devastating knockout blows on Offaly with Michael Flynn and Harry Kiernan both leaving the net dangling and giving Longford a commanding 2-9 to 0-6 cushion with 49 minutes elapsed.

So from a position where they trailed by 0-4 to 0-6, Longford had turned this encounter completely on its head by racking up 2-5 without reply between the 28th and 49th minutes.

Offaly sub Steven Doran ended his side’s long wait for their 7th point when he was on target in the 51st minute, however, Longford swiftly restored their nine points advantage as Matthew Carey converted a free, 2-10 to 0-7 after 53 minutes.