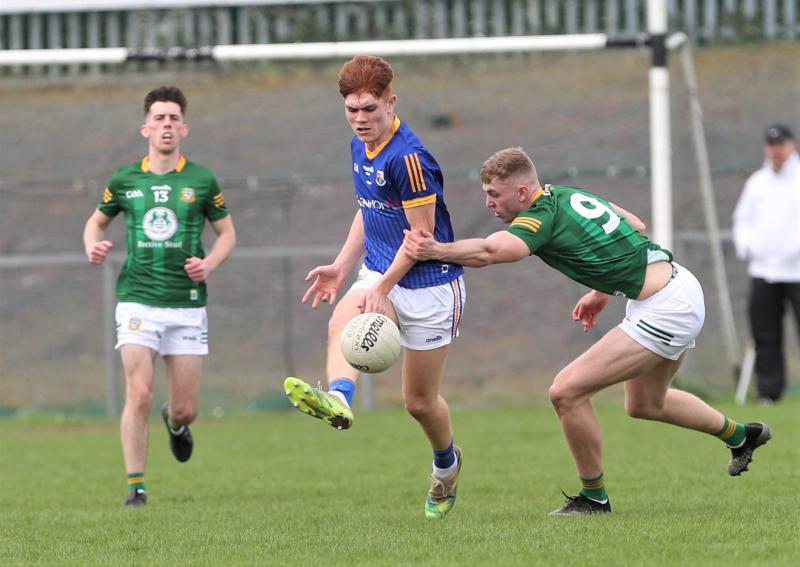 After a titanic second half performance, Longford took the lead against the odds in the 62nd minute through an excellent Keelin McGann point.

However, Ciarán Carey’s side failed to see it out as Meath snatched a late victory with points from substitutes Daragh O’ Reilly and Pearse Sheridan, much to the devastation of the considerable home support.

Many Longford patrons would have acknowledged that they now had a daunting task facing them at the interval after not making their advantage count against the talented Royals.

In spite of this, similar to their previous game in Parnell Park, Longford improved their performance in the second half against the wind.

Longford upped their intensity and brought back the grit and tenacity that was to the fore in their victory over Wexford.

Carey’s side began turning over countless balls in the middle of the park with Aaron Farrell, Conor Leonard and Jack Macken pressing and tackling the Meath out ball superbly.

Keelin McGann was unusually moved to the half back line but the surprising move worked as the Kenagh man found more joy coming on to the ball in the second period after a quiet first half.

McGann along with his wing back counterpart Darren Moffet began running at the Meath defence and hitting diagonal ball towards the inside duo of Duggan and Macken.

The two Jacks were once again very impressive in leading the front line for Longford and showed great mental toughness when firing over two points at the beginning of the second half to keep Longford in contention.

Meath had kicked a brace of points from the dangerous Finnerty and captain Frayne on the resumption and looked like they could pull away before Colmcille’s Macken settled Longford with a great point.

Meath’s centre forward Moriarty then struck over a neat point but Longford responded with an inspirational free from Duggan and an excellent point from the impressive Matt Duffy after a powerful drive up the centre, to leave the minimum between the sides.

Mark Coffey who kicked the winner for Meath in last year’s All Ireland minor final pointed next for Meath followed up by the first score from the aforementioned super sub Daragh O’ Reilly.

Resilient Longford, backed by the Pearse Park support, somehow fought back and took over in midfield and found momentum with fierce tackling and turnovers in key areas. Meath could not handle the pressure of the tenacious tackling and constant running at their defence and they gave up frees for the reliant Duggan to stand over.

The target man cleanly struck 3 frees in a row as Longford levelled the game for the first time since Kinsella’s goal.

Clonguish’s Duggan delivered another top drawer performance displaying excellent striking from both dead balls and open play. The full forward also showed great ball winning capabilities and used his prowess to win a penalty in the 57th minute with the game on level terms.

Unfortunately, Duggan struck the post with the penalty but Longford were now a man up as Adam McDonnell received a black card for his foul on Jack.

Jack should have received another penalty moments later but Carlow referee John Hickey didn’t give the call, most likely influenced by his decision just minutes earlier.

Longford did take the lead for the first time in over 40 minutes when Keelin McGann raced through for a point in the 62nd minute but Longford’s closing finale contradicted their entire second half performance as the made too many mistakes and substitutes O’Reilly and Sheridan capitalised to take the spoils.

Longford will be disappointed that they could not hold out for a semi final spot but in reality they left too much to do after a sub par opening half.

After 20 minutes with the wind on their backs, Longford only led by 3 points to no score thanks to points from Duggan (2) and Macken. Meath outscored Longford despite their handicap, 1-4 to 0-3 in the final 10 minutes with corner forwards Finnerty and Kinsella inflicting the damage.

Longford’s scores only came from sporadic attacks and they benefited from three fantastic individual efforts from Duggan (2) and youngster Matt Duffy who started ahead of the injured Richard Prior. Dromard’s Duffy score at the death of the half from the outside of the boot under the terrace was as fine of a score as you’d see and left the half time score at 1-4 to 0-6.

Longford’s second half performance, whilst coming up short, will leave a lot of hope for anyone that was in attendance.

Longford showed a fighting spirit that must be evident for any small county to succeed and that passion plus intensity was accompanied by some excellent individuality which hopefully will also be on show in a couple of weeks time in the Leinster senior championship opener against Westmeath.

Westmeath agonisingly knocked Longford out in this competition last year in sudden death penalty shootout and Longford most cruelly bow out once again by the minimum of margins to Meath who now face Dublin in the semi-final next Thursday.