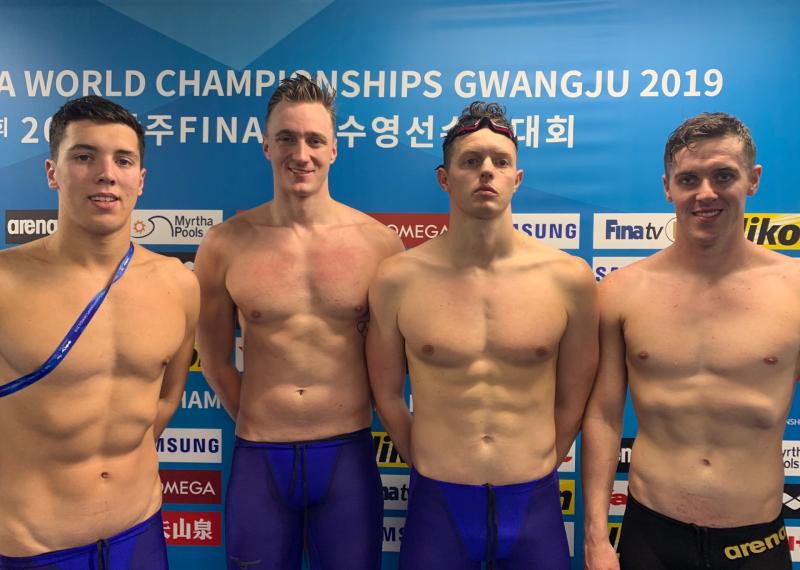 Ireland’s Men’s Medley Relay, which featured Longford's Darragh Greene, closed out the FINA World Swimming Championships in Gwangju, South Korea today with a new Irish Record and with hope and opportunity for an Olympic berth, despite just missing out on an automatic place.

Super swim in a new IRISH RECORD of 3:35.86 for our Medley Relay boys! They won their heat and finish in 14th place overall, just 2 places & .75 off the automatic Olympic place. Great position to be in heading into 2020. #FINAGwangju2019 #teamarenaIRL pic.twitter.com/et7bWq2v4I

Ireland’s Irish record time of 3:35.86, which won their heat, still leaves the quartet in contention with a further four places on offer to those teams in the top 16 in the World in May 2020.

Speaking after the race Darragh Greene said, ‘It’s really good, we couldn’t have asked for anymore really on the day, we stepped up, all swam hard out, so we’ll see what happens next year now."

Brendan Hyland added, "I’ve been in the form of my life (this week) but a little bit disappointing split in that, but you do your best you can on the day. 14th is a good enough place to be and we’ll give it a good run next year."

Following eight days of racing in Gwangju, where six new Irish Records were set, National Performance Director Jon Rudd commented, “There are so many positives that this Irish team and Swim Ireland can take away from this Championships. Three semi-finals at this level, with another two positions one place off a semi-final is a great outcome for us a year out of an Olympic Games.

"The times achieved by both Brendan Hyland and Darragh Greene at this meet are truly world class and testament to a home soil coaching programme delivering at the highest level. Our relays have been excellent, particularly our Men’s 800m Freestyle relay and 400m Medley relay and we must now plan carefully as to what we need to do to try and secure Olympic berths in these events for 2020. If we achieve that, another piece of Irish swimming history is written. I’m very proud of those that stepped onto this stage and truly delivered. Lifetime best performances at this meet are anything but easy. Finally, sincere plaudits to our coaches and staff for aiding our athletes to these results. And now – roll on 2020.”