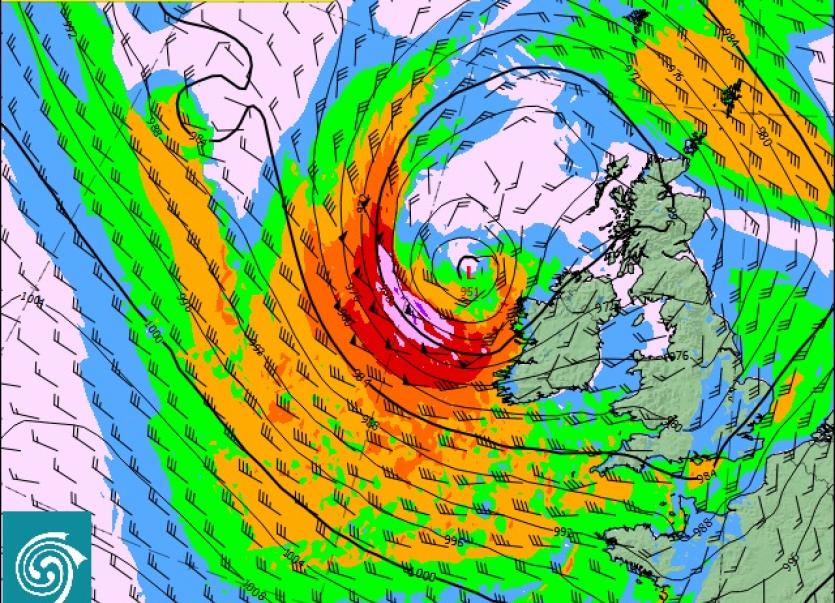 Severe winds from Storm Jorge are set to strike Ireland over the weekend when flooding will worsen as a result of the heavy rain that will accompany the weather system which will have its first impact in Spain, according to Met Éireann's meteorologist’s commentary.

It says Storm Jorge (named by AEMET, the Spanish meteorological service) is the latest in a series of Atlantic storms this month and is due to affect Ireland from early Saturday.

"Storm Jorge (pronounced Hor-hay) is a storm centre which will undergo rapid cyclogenesis in the mid-Atlantic during Friday 28th February as it tracks northeastwards towards Ireland. It is then expected to fill slowly as it crosses over the north of the country during Saturday 29th February," said the weather forecasters.

The picture below shows the forecasted position of Storm Jorge and its associated fronts at 12 midday on Saturday. 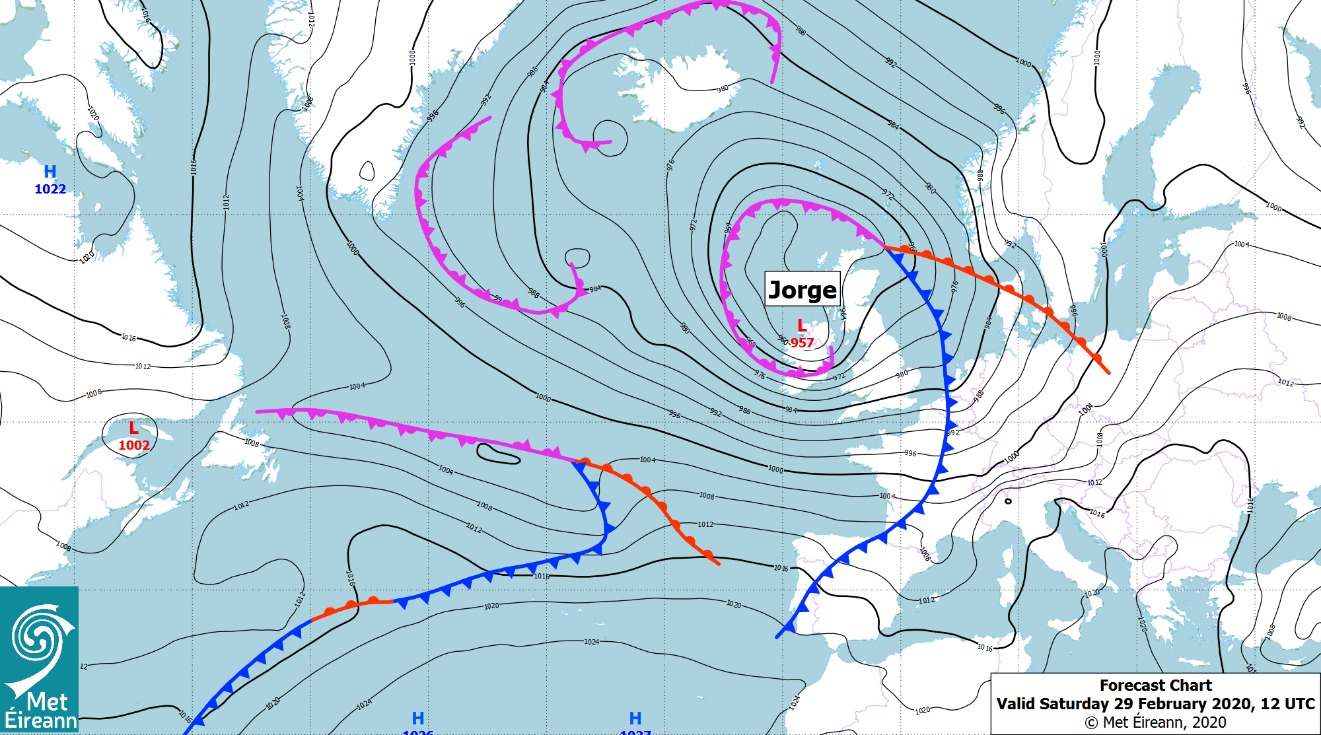 Also read: A number of Longford roads are flooded but passable

"Spells of heavy rain associated with Storm Jorge will worsen the flooding situation across the country. A yellow level rainfall warning will come into operation for Munster, Connacht and Donegal from tonight (Thursday night) to late on Saturday evening".

A) Elevated river levels - River levels are elevated across the country, particularly in the Midlands (Shannon catchment). Levels across the Northern half of the country are also high. Therefore, additional rainfall over the coming days will compound the flooding issues here.

B) Coastal Flooding - We are in a period of transition between Spring (High) Tides and Neap (Low) Tides. This means there will not be a large variation between high and low tides. The combination of high seas and strong winds or stormy conditions associated with Storm Jorge may increase the possibility of coastal flooding, especially in flood-prone areas along the Atlantic coast on Saturday (particularly when coincident with high tides).

Storm Jorge is the seventh named storm of the season. It was originally named by AEMET, the Spanish national meteorological service, due to the impact of the storm’s active cold front which is forecast to bring severe gusts and strong waves to the northwest of Spain.

Here’s the list of the winter storms so far this season:

The commentary explained how the storms are named.

"Storms are named to aid the communication of approaching severe weather, helping the public to be better placed to keep themselves, their property and businesses safe. Met Éireann are part of a western Europe storm-naming group which includes the Dutch meteorological service, KNMI and the UK’s meteorological service UKMO.

"The national meteorological services of Spain, Portugal, France (MeteoFrance) and Belgium (RMI) are part of a southwestern Europe storm-naming group which has a separate list of names allocated to the Winter 2019/20 storm season. When a storm has already been officially named by another national meteorological service or the US National Hurricane Centre, that storm name is retained," said the forecasters.

The commentary urged people to keep up to date and, as forecast confidence improves over the coming days Met Éireann will issue warnings as required. Please check for updates on https://www.met.ie/warnings