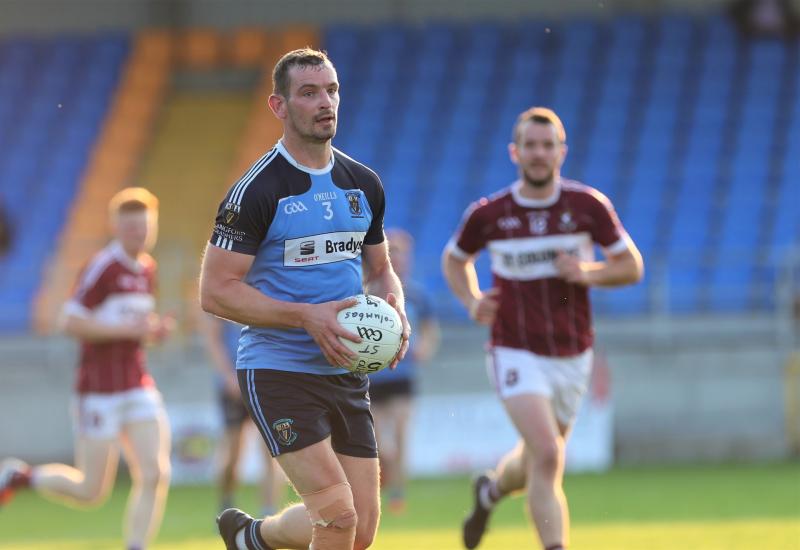 It is a repeat of the 2019 final where Killoe Emmet Óg, holders of 12 county titles, emerged victorious by the smallest of margins, 0-12 to 0-11. Killoe disposed of Mostrim with clinical ease in the opening semi-final on Saturday evening, triumphing by 1-20 to 1-6.

Connolly Cup holders Killoe are through to the final of the Covid delayed 2020 Peter Hanley Motors Senior Football Championship after cruising to a very easy win over Mostrim at Glennon Brothers Pearse Park on Saturday evening with the razor sharp Mark Hughes firing over the impressive total of 11 points.

Slashers, no doubt, will be fiercely determined to avenge the 2019 final reversal and one has to go back to 2013 for when the roll of honour leaders won the last of their 16 titles.

It was a deserved win by Noel O’Brien’s side who kept Mullinalaghta scoreless in the third quarter.

Gerard Flynn was excellent throughout as was Tadhg McNevin. But there were players all over the field who put in great performances

Slashers were wasteful at times and kicked eight wides in the opening half compared to Mullinalaghta’s two. They also created a goal chance with Paddy Fox back to clear the ball off the line just as if looked as if Darragh O’Connell had found the net for the townies.

Andrew Kelly kicked over the game’s opening score in the second minute but Mullinalaghta replied with a goal from Jayson Matthews.

The sides were level in the ninth minute when Robbie O’Connell slotted the ball over the bar. Mullinalaghta were two ahead in the 15th minute but a pointed free from Andrew Kelly cut the gap to one in the 17th minute.

Cian Mackey set Francie Mulligan up for a point in the 25th minute. Slashers had chances but kicked a number of poor wides. Fox also had to be alert to clear Darragh O’Connell’s effort off the line as Mullinalaghta went in at the break 1-4 to 0-5 in front.

Slashers were level in the 35th minute with fine points from Gerard Flynn and Peter Lynn. A pointed free from Kelly edged Slashers back in front in the 40th minute.

The final quarter of the game was full of tension and excitement as the lead changed twice. Two Rian Brady points (one mark) put Mullinalaghta ahead again in the 54th minute.

In a dramatic finish to the highly entertaining 2020 Mulleady Group Intermediate Football Championship final at Glennon Brothers Pearse Park on Sunday, Darren Carberry struck to score a couple of goals in stoppage time to clinch the capture of the Gerry Hennessy Cup for Killashee for the first time since 2016.

Slashers’ response was terrific; Tadhg McNevin did the hard work and Gerard Flynn palmed the ball to the net.

Matthews replied with a mark for Mullinalaghta but Sean Clarke sealed the win with a point in stoppage time.