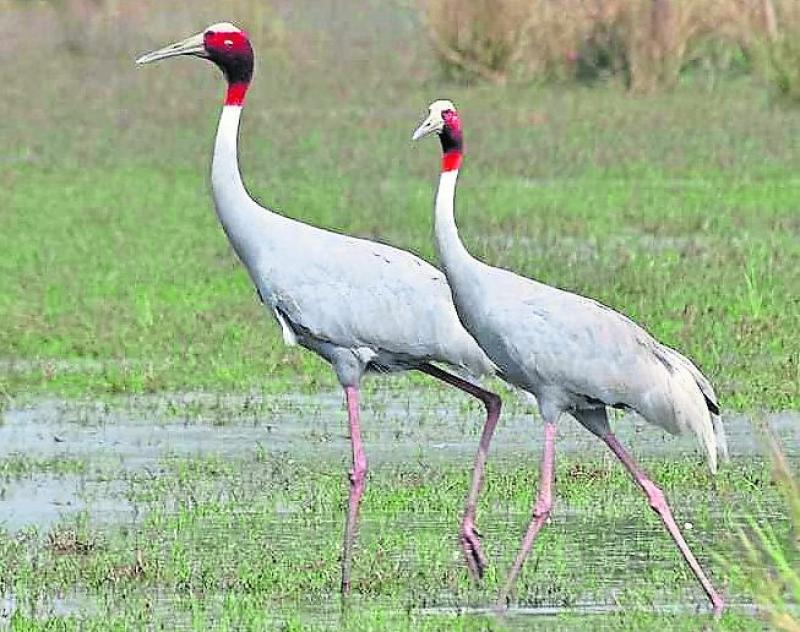 The pair of common cranes spotted near Lough Boora recently. The birds are believed to be nesting locally presenting the possibility of breeding here for the first time in 300 years

There was wonderful news last week when it was revealed that a pair of common cranes had been spotted near Lough Boora and had started nesting, presenting the possibility of breeding in Ireland for the first time in three hundred years.

It's being theorised that the ongoing regeneration of the midland raised bogs is the reason for this exciting  occurrence, because new habitats are being created which are attracting species to the region.

The Bord na Móna ecologist Mark McCorry thinks this might be the reason for the dramatic nesting behaviour, presenting a story which gives everyone a much-needed boost of hope as we emerge from the pandemic.

Dr McCorry predicts that the midland's regenerated landscape will become the home for a whole new range of species of birds and other animals as a result of the move to rewet the bogs after peat harvesting.

Cranes are huge birds, with a  wing span of six to eight feet. The recently spotted pair were first seen in a flooded bog near Lough Boora Parklands, having probably  flown over from Britain. The birds have now moved to a new location where they are nesting and it's hoped they will produce chicks. Their  location is being kept secret in order to protect them from disturbance during a sensitive  nesting time.

"The changes to the landscape since harvesting came to an end are already making a major change to the biodiversity of the region," said Dr McCorry. He added that the monster cranes might in fact have been here for more than two years before they were spotted.

The cranes can grow to over four feet in height.  Cranes have been extinct in Ireland since  1700. However, there have been increased sightings of them in Irish skies in recent years during migration and overwintering, which has been largely due to conservation work in the UK, which has seen their numbers there rise from zero in the 1970s to more than 200 now.  In spite of the  sightings there has been no evidence of the birds breeding in Ireland."

The crane is deeply connected to the culture and history of Ireland, with the bird playing important roles in stories about Fionn MacCumhaill; the druids, St Colmcille. It also  features in the Book of  Kells. Their Gaelic name is corr, which  can be found in many place names, such as the Curragh in  Kildare  which means “crane meadow”. During the middle ages they were kept by some as pets.

Unfortunately, they were also a popular food item for people at the time, and their ease of capture by foxes, and draining of wetlands, resulted in their decline during the 17th Century.  Bord na Móna continues to re-flood bogs throughout the region and experts say that the public can expect to see further rare species of birds as the  rewetting continues.