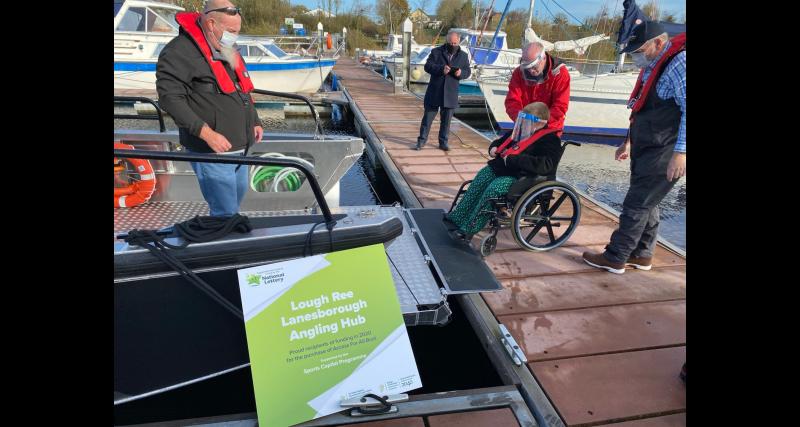 Lough Ree Access for All in Lanesboro and Ballyleague is among the thirty-six community groups, sports clubs and organisations from all over Ireland who have been announced as finalists in the National Lottery Good Causes Awards.

The National Lottery Good Causes Awards will be broadcast live from the Mansion House in Dublin this Saturday, May 29 from 1pm.

The Awards have six categories: Sport, Health & Wellbeing, Heritage, Arts & Culture, Community and Youth. A seventh category, Irish Language, will have a special award to be announced at the Awards final, in recognition of outstanding work done in the promotion of the Irish Language.

The virtual Award show will open with a special message from An Taoiseach, Micheál Martin while the category winners will be announced by some very well-known personalities which will be revealed in the coming days.

The Lough Ree Access For All boat provides an adapted, integrated water based experience for people with disabilities for the very first time, allowing access for up to 8 wheelchair users at the same time.

The boat is the only licenced vessel of its kind in Britain or Ireland for passenger travel of this nature and working with its partners, Waterways Ireland and Inland Fisheries Ireland, Failte Ireland, Roscommon & Longford County Council & The Just Transition Fund of ireland, the Lough Ree Access project will improve access for people with disability to the rivers and lakes.

Each national category winner will receive €10,000 while the overall Good Cause of the Year will get an additional €25,000 on top of this.

The six finalists in the Health & Wellbeing category are;