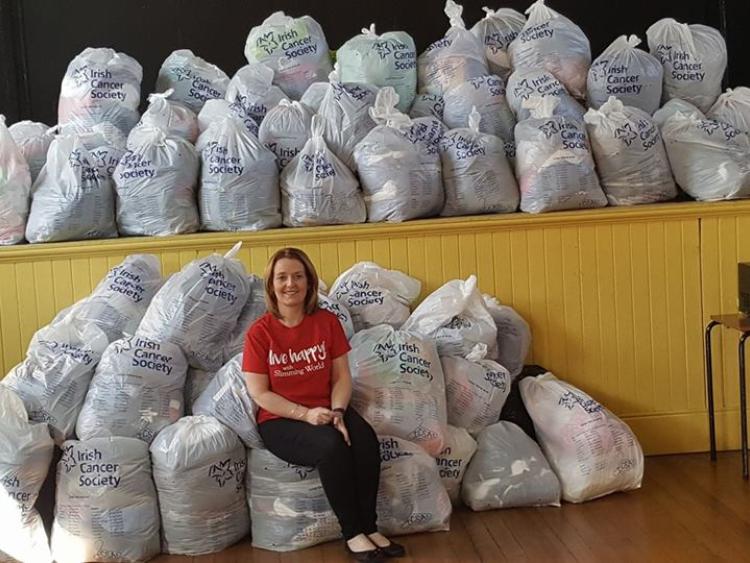 162 bags of clothes, shoes and accessories have been collected by the Temperance Hall groups alone as part of the Slimming World Big Slimming World Clothes Throw.

Generous slimmers across Longford and across Ireland raised thousands of euro in May for The Irish Cancer Society by donating the clothes they’ve successfully slimmed out of and know they’ll no longer need.

162 bags of clothes, shoes and accessories have been collected by the Temperance Hall groups alone as part of the Slimming World Big Slimming World Clothes Throw and each of the filled bags is worth around €30 to the charity.

The bags were donated to their nearest Irish Cancer Society shop in Castlebar as part of the national fundraising drive being run by the weight-loss organisation.

Slimming World also aims to raise awareness of how keeping a healthy weight can reduce the risk of developing some types of cancer.

Siobhan Brier, who runs the Longford Slimming World groups,  is delighted to have raised so much money for charity. She says: “I can’t quite believe how many bags we managed to collect – I knew my members were amazing but I didn’t expect such an incredible level of effort . Collecting them up to take to local Irish Cancer Society shops was a real workout in itself  but all so worth it. To raise such a phenomenal amount for a charity that does so much to beat cancer, feels amazing.

“When my members lose weight I see more than just a physical transformation. Above all, I see their confidence bloom. Many go from nervous and shy new members who are very uncomfortable with the way they look, to confident, healthy and happy individuals with a new lease of life and a twinkle in their eye. They learn to remove feelings of guilt around food, and instead feel empowered by all the Free Food they can enjoy on Slimming World’s healthy eating plan Food Optimising. Through Food Optimising, they learn not just to change the way they feel about themselves, but also to change the way they think about food by making small changes to the way they shop, cook and eat, and the weight soon falls off without them ever feeling like they are on a ‘diet’. There is no diet, it’s a lifestyle change!

“Members also make friends in group, they celebrate success together and they are there for one another through the more challenging times too. Many of them have so much energy thanks to losing weight they get more active – walking, swimming, dancing… the list goes on!

"I’m so proud of how our groups came together.... from helping each other transport their bags to the Temperance Hall and filling the van in preparation to transport them to the Irish cancer society. It was actually two of our fantastic members that drove all 162 bags to Castlebar so a special thanks to them. Every single person that did their part is a superstar in my eyes and I know the Irish Cancer Society shop in Castlebar were overwhelmed with Longford's generosity. I'm so very proud.

"So many people don’t know how much of a difference losing weight can make to health – including reducing the risk of developing cancer and other illnesses and I'm just delighted that we could do our own little bit to aid awareness and raise funds by donating the clothes we have all slimmed out of."