‘A soldier - our soldier - and a comrade to many. You’ll be missed more than words can say.’ 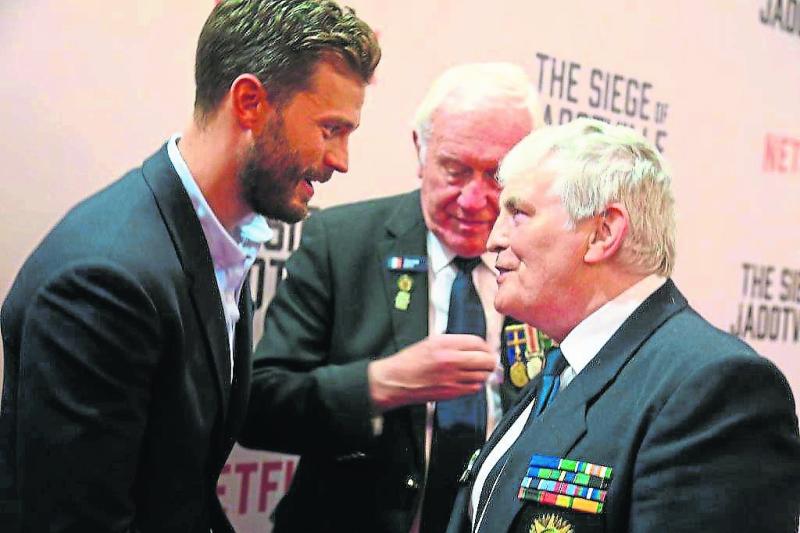 There was a particular poignance to the funeral of Michael Tighe on Monday morning as family and friends gathered in St Mel’s Cathedral to bid farewell to one of the stalwarts of Longford’s military history.

The 83-year-old Tiger of Jadotville author was one of the last surviving veterans of the Siege of Jadotville, which took place in the Congo in the 1960s and spent almost 60 years campaigning for recognition for the bravery of his comrades.

He was one of twelve Longford men among 154 Irish UN soldiers, who were attacked by a local Katangan force, led by French and English mercenaries. Despite being outnumbered and out-armed they prevailed for five days until they ran out of food, water and ammunition.

And, while much of the nation may remember him for his bravery in the field, his family remember not just the soldier, but the man behind the medals.

Today’s Cabinet decision to award medals of bravery for those who fought in the siege of Jadotville in the Congo in 1961 has been welcomed.

“To be tasked with the duty of summarising Michael Tighe’s life into one A4 page is near impossible, as you can imagine,” said his granddaughter, Shaena, while delivering a touching eulogy at Michael’s funeral on Monday.

“A father to four, a grandfather to ten, a father in law to four and a wonderful husband to our beautiful grandmother, Alice, he was the ideal example of what a family man should be.

“Originally a Roscommon man, it didn’t take him long to settle into the Longford community back in 1969. Fast forward to 2022 and look at the family he made. He loved us more than you can begin to imagine and he showed it in more ways than one.

“Whether it was fishing with his sons, Michael and Mark, having a barbeque at his daughter Antoinette’s house or taking a spin up to Celbridge to his daughter Sandra for a singsong in O’Connor’s pub, his family was his main priority.

“Second to that was his love of travel - Bulgaria, America and Lanzarote to name a few,” she continued and, indeed, Michael’s sunglasses were one of the symbolic items used to remember his life, alongside other items such as his medals, his book, his gardening hat and his army helmet.

“He wouldn’t be back from his holidays and he was already planning his next. I remember someone saying to him, ‘we’ll have to clip your wings, Mick’ and I thought that was so funny because grandad didn’t have any wings - but I’m sure he has them now.

“Grandad was very bright and absorbed and shared knowledge whenever he could. He did talks on his experience in Jadotville. He wrote his book, The Tiger of Jadotville, and he even spoke a bit as Gaeilge with his best friend, Tiernan Dolan. He filled our lives with love and great memories and to accept our lives without him is incomprehensible.”

The Siege of Jadotville premiere evening at Longford Omniplex

There were many tributes and words of sympathy as well as fond memories and photographs posted on social media and the condolence section of rip.ie last week as the news of Michael’s passing spread throughout Longford and further afield.

The Peter Keenan ONE branch was quick to post its tribute to one of its own, with touching words shared on Facebook the same day Michael passed away.

“Mick who was a long-serving member of the Peter Keenan Branch of ONE, was born in Elphin in 1939,” read the tribute.
“He enlisted in the army in 1958 and served with the 6th Infantry Battalion. He served in the Congo with the 32nd Battalion, 35th Battalion and the 2nd Armoured Car Squadron.

“He was a member of A Company who fought so fiercely at Jadotville in September 1961, and with others never gave up the fight to have those soldiers and their heroic stand recognized by those in authority.

“It’s amazing to think that he and his comrades, who were treated so shabbily by their superiors, remained so loyal to the army and the state down through the years.

“Mick was no shrinking violet, he was strong-willed and headstrong and wasn’t the easiest to work with, but he was the perfect soldier, willing to take on any task and see it through to a satisfactory conclusion.

“He was posted to 17th Bn, on 8th June 1970 and remained with the unit up to his retirement. He was promoted Cpl in 1971 and later elevated to QM of C Company, Strokestown.

“After he retired, he worked in the security business where the expertise gained in his military life was much sought after.

“In 2016, his book, ‘The Tiger of Jadotville’ was published, this was his personal account of his experience of the events and aftermath of the Siege of Jadotville, it was a huge success.

“Mick was a first-class soldier, he loved the military life, but above all this, his wife and family were always his first priority. To them, we would like to extend our sincere sympathy at this difficult time. Rest in Peace Old Friend.”

Condolences also poured in on rip.ie for the well-loved soldier. Among them was a touching post by local photographer and Humans of Longford founder, Tiernan Dolan, who was, as Shaena mentioned in her eulogy, Michael’s best friend.

In a touching tribute on the Humans of Longford Facebook page, Tiernan referred to Michael as a “beloved and loyal friend”.

After telling the story of Michael’s time in the Congo and his experience during the Siege of Jadotville, Tiernan shared some details of his dear friend’s love for his family.

“After the Congo experience, Michael settled to a quieter army life based in Connolly Barracks,” he said.

“He married the love of his life Alice and together they had four children Michael, Mark, Antoinette and Sandra.

“In later life, he always acknowledged that Alice his beloved wife and their adored children kept him happy, safe and secure. However proud he was of his army colleagues, he was most proud of his own family.

“He certainly had a life less ordinary. Fiercely proud of his army days, he was always eloquent and articulate in recalling those days whether for a Longford Historical Society lecture, talking to secondary school students, being interviewed for radio, TV or the papers.

“A warrior to the very end, just a few days ago in ICU, before we exchanged our final salutes, he was defiant, ‘no white flag, no towel being thrown in’.

“Michael Tighe may be remembered by the title of the book he wrote ‘The Tiger of Jadotville’ but he was so much more... a loving husband, an adored father and grandfather, an athlete in his day, a musician, a storyteller, a lover of the outdoors, a very intelligent man and a great, beloved and loyal friend whose friendship I’ll treasure forever.”

Those sentiments were echoed by Shaena at the well-loved soldier’s funeral on Monday.

“A pillar in our lives, a guiding light, a tenacious presence that filled a room - there’s nothing we wouldn’t give to have one more day, hour or minute with you, Grandad,” she said.

“You left a hole in our hearts when you had to say goodbye. But the memories live on in our minds forever.

“A soldier - our soldier - and a comrade to many. You’ll be missed more than words can say.”