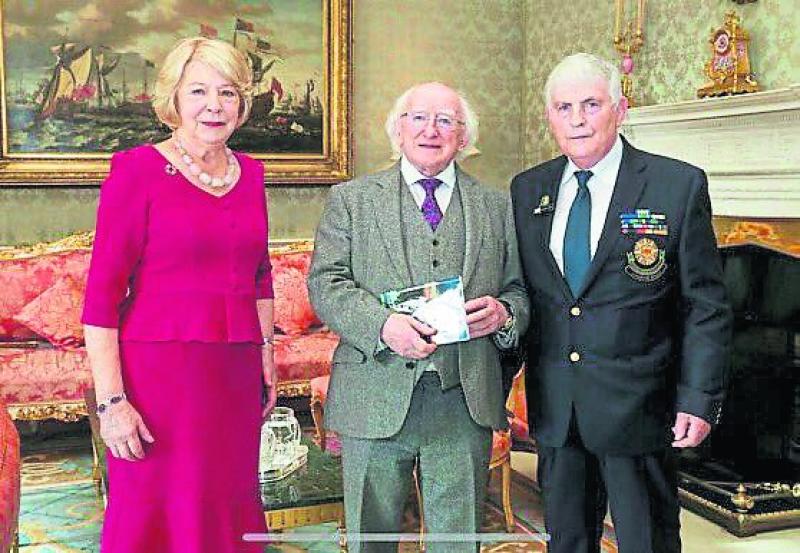 Longford man and Congo veteran, Michael Tighe, had a day to remember as he was invited to Áras an Uachtaráin to meet President Michael D.Higgins and his wife Sabina.

“It was a big shock. I certainly wasn’t expecting it,” Michael said.

Michael explained that although he had been informed months prior to the event that he may receive an invite, he didn’t hold out much hope.

“I didn’t hold out much hope. I just said pigs might fly.”

Mr Tighe did eventually receive the invite and did so on the back of his past achievements at the Siege of Jadotville. The Longford native was assigned to Congo in 1960 with the 32nd Battalion, where he stayed until 1963. He then wrote a book on his experiences in Congo.

His book titled ‘The Tiger of Jadotville’ was released in 2016 and the Annaly Park man was invited along to Aras an Uachtarain last Friday, where he presented the president and his wife with a copy of the book.

After over 50 years of campaigning, the exploits of the men who fought at Jadotville were only officially recognised in 2017.

Mr Tighe was invited along with this in mind and the Longford man, who turns 80 this coming Friday February 22, described it as the ultimate birthday present.

“It was a complete surprise. I was over the moon,” he said.

Michael now plans to celebrate his monumental birthday with his close friends and family this coming Saturday. He also confirmed that he and other comrades from the Jadotville Siege have been invited to spend another day at Áras an Uachtaráin.

Also read: Longford soldier Michael Tighe on the red carpet at Dublin premiere of The Siege of Jadotville