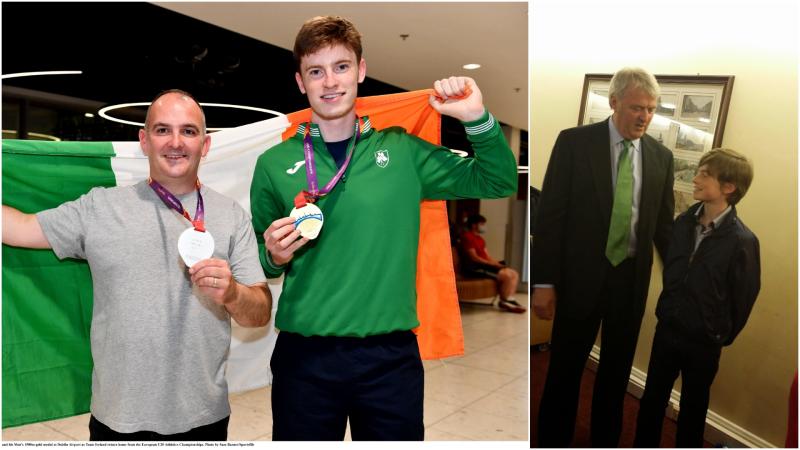 Fresh from his heroics in Estonia last weekend where he was crowned European U20 1,500m champion, Longford AC's mercurial Cian McPhillips was in awesome form at the AAI Summer Games in Carlow today as he set a new Irish U20 1500m record.

Brilliant McPhillips crossed the line in a time of 3:40.56, thereby slicing two seconds off the mark that stood for 45 years and was set by fellow Longford native Ray Flynn.

Last weekend, speaking from the USA, Ray told the Leader, “I first met Cian back in March of 2014 in Longford. I was told that he was a prodigy and that he was going to be a great runner one day. On Saturday, he proved that he is one of the bright young athletic stars in the world.

“Cian ran with self belief and showed that he is the best young middle distance runner in Europe. I am so proud of what he has accomplished, for himself, his family and his coach. I had Cian at the Millrose Games in New York in 2020 and he did not disappoint with a great win there.”

“In my event, 1500m, (Cian McPhillips) who won the other day (Saturday, July 17 at the European U20 Championships in Tallinn, Estonia) ran the last 400m in 54 seconds; paralleling me in the Olympic Games but also he ran 3.46:55. That is only five seconds slower that what I ran.”

Cian is now the 11th fastest U20 in the world this year, 2nd fastest European. He also set a new European U20 800m indoors last February so the Longford athlete's star continues to rise.

I did suggest the men's 1500m in Carlow might be worth following! New Irish U20 record for Cian McPhillips! Live results: https://t.co/JKdWbJioot

Lots of great results for Irish athletes at the BMC event in Loughborough last night too! Full results: https://t.co/e3ZMEySI3O pic.twitter.com/cHAaaPcUSS

Another record while you’re waiting on that bus: 3:40.56 an Irish U-20 1,500m record for Longford’s Cian McPhillips. Fast, two seconds faster than the previous record set 45 years another by another Longford runner Ray Flynn, still the Irish senior mile/1,500m record holder

The kid just keeps getting better.

Cian McPhillips smashes the Irish U20 1500m record in Carlow, clocking 3:40.56 to take 2 seconds off the mark that stood to fellow Longford native @RayPFlynn for 45 years.