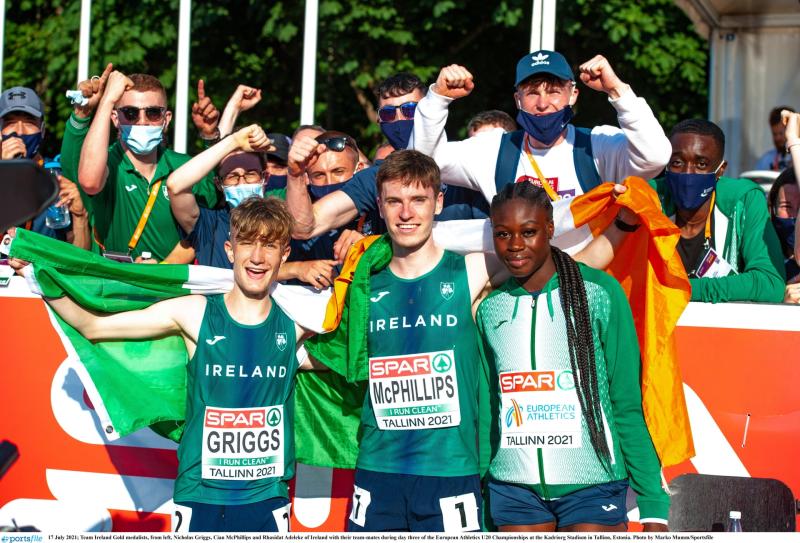 Irish athletics legends Sonia O'Sullivan, Longford's own Ray Flynn and David Gillick are among the myriad of people that have  tweeted messages of warm congratulations to Longford's European U20 1,500m Champion, Cian McPhillips.

Yesterday was a landmark day for Irish athletics as Cian, Rhasidat Adeleke and Nicholas Griggs created history by winning three gold medals on day 3 of the European U20 Championships in Tallinn, Estonia.

Here's how Twitter and the athletics world reacted to Cian's memorable win;

What a superb performance from Cian McPhillips to become European U20 1500m Champion! Tactically as always! https://t.co/6ZSwOqKGn0

Super Proud of my fellow Longford man who just won the U20 European 1500m title pic.twitter.com/CdQw2F831b

Gowan Cian McPhillips, what a run! Showed serious pace at the end. Gold for Ireland!!

When it rains, it pours!

Another gold @EuroAthletics U20 champs, Cian McPhillips takes the win in the 1500m.
Brilliant day!! The future’s looking bright!#Tallin2021 https://t.co/kU3rQZ9p6b

A memorable day for the Irish as Cian McPhillips powers to European U20 1500m gold - the first by an Irishman at this event since Colin Costello won the same title in 2005.

Didn't put a foot wrong throughout and held it together brilliantly up the home straight. https://t.co/iYsWE1aU8t

As the late great Jimmy Magee would have said “Different Class”. Extraordinary day for Irish athletics. Our other gold medalists Cian McPhillips (1500) & Nicholas Griggs (3000) like @rhasidatadeleke won’t be at the Olympics but can’t wait to see their progress towards Paris 2024. https://t.co/q1Bsv25pwP

Superb - Fabulous Pedigree - Longford Irish Mile record holder a Class performer too - an extremely hard act to follow wishing the youngster every success in the future !!!!

Super win for Cian McPhillips in 1,500m final at the @EuroAthletics U-20 Champs. Congrats to Cian and his coach @JRproject1500m It was Ireland's second gold in this event after Colin Costello's 2005 win. @irishathletics

Well done Cian McPhillips, there won’t be a weed pulled in Ardagh for a fortnight https://t.co/shz31u3W3g

Some finish for Cian McPhillips in the 1500m too. Another gold for Ireland. Most successful Euro U20s ever for Ireland now. #Tallinn2021 pic.twitter.com/Q08UhDF0NE