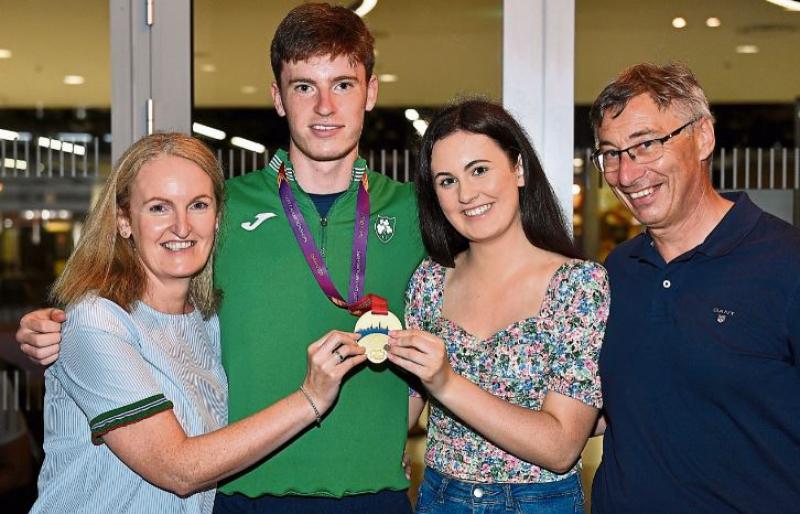 Longford’s Cian McPhillips has been hailed as ‘one of the bright young athletic stars in the world’ following his powerful and tactically astute gold medal winning performance in a highly competitive 1,500m final at the European Under-20 Championships in the Kadriorg Stadium in Tallinn, Estonia.

Speaking from the USA, Ray told the Leader, “I first met Cian back in March of 2014 in Longford. I was told that he was a prodigy and that he was going to be a great runner one day. On Saturday, he proved that he is one of the bright young athletic stars in the world.”

Cian struck gold in a time of 3.46:55, despite his outdoor season merely getting underway after completing the small matter of the Leaving Cert in June and also overcoming Covid-19.

Cian revealed after the race, "It was very tough. My season is only starting now due to school (Moyne CS) and getting Covid earlier in the year which kind of hampered my preparations coming into this championship. So I'm still actually a bit shocked that I managed to pull it off and it really makes me excited for what I can do over the coming weeks."

“Cian ran with self belief and showed that he is the best young middle distance runner in Europe. I am so proud of what he has accomplished, for himself, his family and his coach. I had Cian at the Millrose Games in New York in 2020 and he did not disappoint with a great win there.”

A myriad of Longford folk bursting with pride took to social media platforms, flooding it with congratulatory messages for Cian.

The county’s first citizen and local authority Cathaoirleach, Cllr Peggy Nolan, led the congratulations to Cian, his family, his coach and all at the Longford Athletics Club.

She said, “As Cathaoirleach of Longford County Council, I am thrilled that this local authority has been able to support young athletes and sports people through our Sports Bursary scheme, helping both Cian and Olympic swimmer Darragh Greene, in some small way, to get to where they are today. They are inspirational, leading the way for the next generation of athletes.”
Cian’s family, parents Paddy and Laura and his sister Sarah watched the race on a live stream on their phones whilst attending the Connacht Juvenile Championships in Athlone IT.

Last March Cian was also very much in the spotlight as he made his senior international debut, and emerged from his heat to qualify for the semi-finals of the 800 metres at European Indoor Championships in Torun, Poland.

So his 54-second gut busting final lap on Saturday shouldn’t have been that surprising or should it?

Cian, who certainly has a wise head on young shoulders, remarked, "I could actually see the shadows of the guys coming up behind me, so I was really pushing from 150 on.

"I was trying to control the rest of the race purely because I knew that in the 1,500m that final 200 is so, so important and in fairness to the others they put it right up to me and it was a real battle to the line. And luckily I had a bit of a head start that allowed me to get it at the end."

Coached by Kilbeggan native Joe Ryan, Cian spoke about how he needed to improve on his performance from the heat.

"In the heat, I really left myself with an awful lot to do. I was 8th without 300 to go and I really had to push myself all the way just to qualify.

"This time (the final), I was in Lane 1 at the start, so I really had to get out hard to avoid getting boxed in and luckily I was able to move out and I was able to position myself right on the leader's shoulder and that's what got me the gold."

It was an historic championship for Irish Athletics as Rhasidat Adeleke (18) completed the women's 100m / 200m double, Nicholas Griggs (16) won the 3000m and Cian (19) triumphed in the 1500m race. Prior to the weekend, Ireland had only ever won four gold medals over the years, so in 24 hours, the country’s gold medal tally doubled to eight.

Reflecting on Ireland's brilliant team performance, Cian pointed out, "We really are producing some superstars in the past few years and it is only getting better with every passing championship.

"Obviously we have Rhasidat Adeleke; she is worth two or three gold nearly every championship and now we've got some new and exciting guys coming up in the distance events and the sprint events and decathlon as well. We are really becoming a proper team that is capable of challenging the big names in Europe."

Longford Athletics Club now boasts a European Champion in an exciting year for the club with the development of their new indoor facility continuing at great pace at St Mel’s College.

It should open in November for their 250-plus membership.

You can relive and watch Cian’s superb European Championship winning run on our website www.longfordleader.ie and also see Sport Pages 64 & 52 for more coverage of his success.