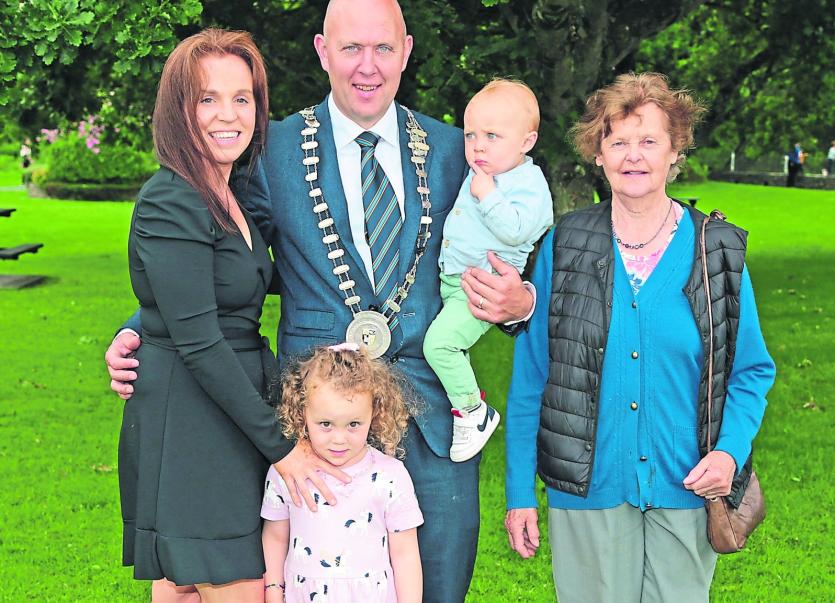 Cllr Paul Ross pictured at the Albert Reynolds Peace Park, celebrating his election with his wife, Jenny, his mother, Rosemary, and his two children, Sophie and Joe PICTURE: SHELLEY CORCORAN

Hugs, handshakes and a celebratory ‘do’ were out of the question last Friday when Legan man, Cllr Paul Ross (FG), was elected to the position of Cathaoirleach of Longford County Council.

But that certainly didn’t dampen his spirits as he accepted the chain and sat in the chair in the large sports hall at the Albert Reynolds Peace Park.

Hardworking, relatable, and a bit of craic, the young farmer, father, and south Longford’s poll topper at last year’s local elections, has big plans for his year as cathaoirleach.

“At the start of the year, I had thought about how my year as cathaoirleach would plan out but, as the year went on, my plans and ambitions for being cathaoirleach, no more than all our plans, have dramatically changed over the last four months and we all now live in a new world that will present challenges that none of us expected at the start of the year,” said Cllr Ross in his acceptance speech last Friday morning.

“We now have a new reality that we have to live with and, as a local authority, we will have to adapt and change to meet the needs of the people we serve.

“We have never before had so many changes to deal with but this has been a very proactive council over the last number of years between our management team with their vision for the county and their ability to think outside the box and the courage of our elected members in endorsing schemes such as the Longford model which has proven to be very successful, and is now a template for other counties in how to access funding.

“This is the kind of resilience that we will need in the coming years.”

Cllr Ross has a number of priorities as he takes on the new role at arguably one of the most challenging times for Longford County Council and the county as a whole, thanks to the Covid-19 pandemic.

“The Just Transition fund is vital to Longford and we cannot be left behind as we transition to a low carbon society,” he explained.

“We need investment to replace the jobs that the towns and families in Longford were built on over the last 60 years through peat and energy production.”

On that note, Cllr Ross complimented outgoing cathaoirleach, Cllr Gerard Farrell, who, despite having a short tenure in the chair following Micheál Carrigy’s election to the Seanad, achieved an incredible amount as cathaoirleach.

Cllr Farrell took the helm at Longford County Council at the end of May, during what he himself described as challenging times, as the country faced uncertainty in the midst of Covid-19.

Cllr Farrell certainly didn’t sit back and relax while wearing the chain. His most notable achievement while holding the position was the delivery of almost half a million euro in funding for Lanesboro on his last day as cathaoirleach, which will see Lanesboro thrive and prosper in the near future.

Those are boots Cllr Ross hopes to fill during his own 12-month tenure, with the establishment of business hubs in the county being top of his list of priorities.

“The establishment of our Business hubs, COWORX in Edgeworthstown and The Yard in Abbeyshrule will be of huge importance post Covid-19 as we adapt to new working practices,” he told the Longford Leader.

“We have to get back to normality and a hub in Longford town will also be vital. In this post-Covid era, we’ve learned that we’re able to work from a remote location.

“We always had the intention to buy the Providers building in Longford town and turn it into a hub and now we need to drive that forward,” he said.

“Now that there’s more of an emphasis on working remotely, these hubs have never been more important.”

Tourism is another major issue for Cllr Ross, who aims to ensure Longford continues to be placed on the map.

“Over the past number of years we have vastly improved our tourism offering and I hope that we can continue to expand our successful greenway network - two of which have been recently finished in Drumlish and Ballymahon,” he said.

In fact, he told the Leader, he would like to see the greenway, which runs from Center Parcs to the Royal Canal, expanded the whole way along the River Inny, to reach Abbeyshrule and Ballinalack.

“These initiatives should be a template for the county. It is my hope to extend these greenways throughout the entire county,” he said.

Giving special mention to the staff at Longford County Council for their hard work keeping the county running during the Covid-19 pandemic, Cllr Ross placed an emphasis on the importance of supporting local businesses in the county as it slowly starts to reopen.

“I want to acknowledge the difficult time our small and indigenous businesses have had over the last few months and there is no doubt the next number of months will continue to be difficult,” he explained.

“We as a council and the next government will have to be supportive of these small businesses and I welcome the measures already in place such as quick payment of the Business Restart fund and the permission of outdoor seating areas for cafes and restaurants in the county and I look forward to further assistance to small businesses in the coming months.”

On a more personal note, Cllr Ross thanked his colleagues for their support and said that it was “a very proud day” for him and his family. Cllr Ross’ wife Jenny, children Sophie and Joe, and mother Rosemary were all present to share in his election success.

“We named Joe after his great-grandfather, Joe Ross, who himself held the position of Chairman of Longford County Council twice during his political career over 60 years ago in 1955/56 and 1959/60,” Cllr Ross revealed.

“It is an honour for me to take on the position of Cathaoirleach and I look forward to working with you all over the next year.

“I remember the first day I sat on the council in 2014 and we all agreed that day, across party lines that we would wear the blue and gold and do our best for our county and it is my aim to continue in this manner over the next 12 months... though I will need a good stick to keep Brady in line,” he concluded, to laughs from his colleagues.

His election was followed by the election of Turlough ‘Pott’ McGovern (Ind) to the role of Leas-cathaoirleach.

Cllr McGovern topped the poll in last year’s election, which is a testament to his popularity in the area.

He expressed his gratitude to his colleagues and said that he is looking forward to serving the county in his new role.