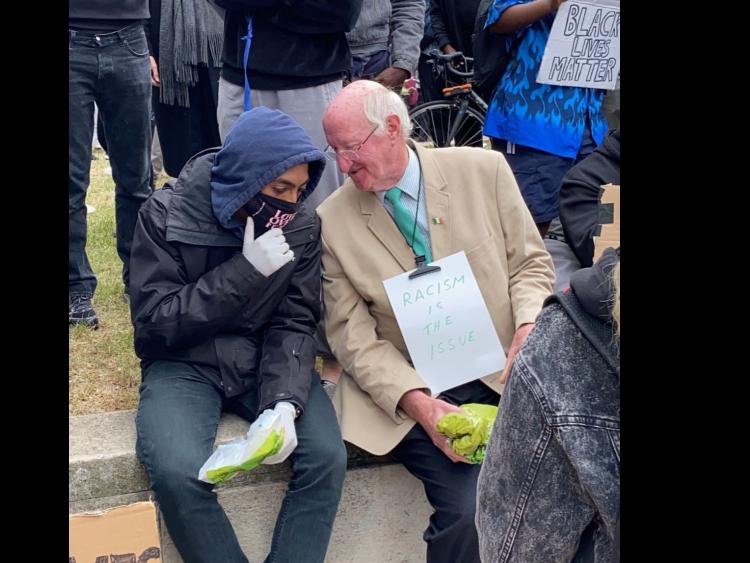 Aughnacliffe native Jim Curran, who has lived in Pimlico, London since 1967, was among those who gathered in the English capital yesterday to support a Black Lives Matter protest.

Mr Curran, who is chairman of the Irish Civil Rights Association, had a banner around his neck declaring 'racism is the issue'.

A Black Lives Matter march, which had been planned for Longford town yesterday, was postponed due to a number of concerns from the community regarding Covid-19 regulations.

The Longford march will be held at a later date, with one of the organisers Eric Ehigie explaining, "This march was planned, not only because we believe it is necessary to highlight how institutionalised racism in America has took the lives of far too many people of colour; George Floyd being but one of those, but also because we felt the need to emphasise how racism is a virus that knows no borders, and that affects us all in a detrimental way - including people of colour here in Ireland."

In an interview, viewed almost 140,000 times on Twitter, with @foss_film , Mr Curran revealed that he has campaigning against racism since he was ten years old, adding that racism was originally used against the Irish.

Jim remarked, "The Irish were discriminated against in housing, in jobs and in every issue, and since I came to London I've been involved in all the different campaigns against racism and I chose to come down here today to focus attention on the appalling racism that happened in the US and even here in England."

Seven years ago, Mr Curran, was a key figure in the protests following the death of Margaret Thatcher.

Mr Curran also had a banner which stated that Ms Thatcher’s paramilitary funeral was insulting and offensive to Irish people.

I had a great conversation with Jim today whilst hiding from the rain, very insightful and wise man. I’ll be posting the full chat tomorrow. https://t.co/CJ3fd9sRGI pic.twitter.com/vP2hWwXb1z