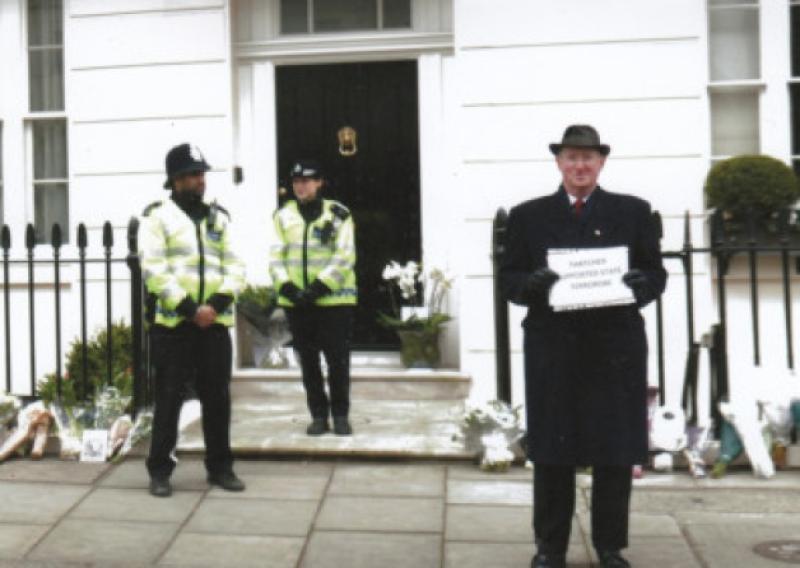 Aughnacliffe native Jim Curran was a key figure in the protests surrounding the recent death of Margaret Thatcher.

Aughnacliffe native Jim Curran was a key figure in the protests surrounding the recent death of Margaret Thatcher.

“I decided to revenge Thatcher’s policy towards our patriots the Hunger Strikers, which was described by former German Chancellor Helmut Khol as ‘amazing, so cold so callous’”.

Mr Curran, who is chairman of the Irish Civil Rights Association, also played a key role in “the Wake”, which was carried out on the Saturday after Ms Thatcher’s death. ‘The Wake’, which took place in Trafalgar Square, London lasted from 6pm to 11.30pm.

“Over 30,000 people attended, several thousand Irish joining in”, says Jim, adding that the event was “multi-national” and “multi-ethnic”.

Mr Curran, who had met and spoken to Ms Thatcher on a number of occasions, adds;: “Thatcher was one of the most contemptible individuals that Britain produced in the last century and I hope all her policies die with her. She was a mother, I have sympathy for her family, but no sympathy for her political policy.”