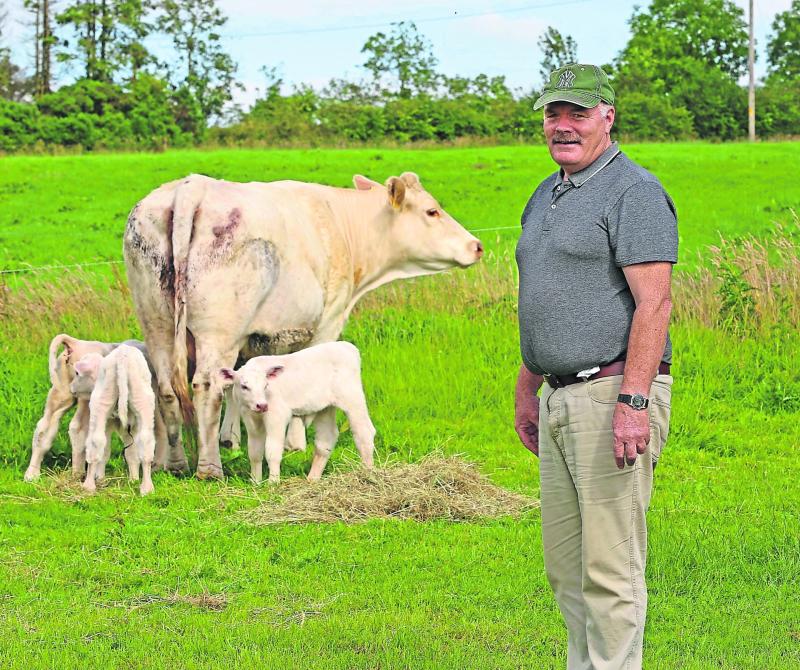 A farmer in Co Longford was greeted to a surprise which normally occurs at a rate of 40,000-1, as his cow gave birth to thriving triplets.

Seamus Campbell, a farmer from near Cloonaugh, Drumlish Co Longford, was keeping a close eye on his Charolais cow, as he expected her to have one if not two calves. Little did he know, however, that she had much more in store.

Seamus told the Leader: “She had twins this time last year, So I was keeping a close eye on her as I thought she was going to have either one massive one or twins.

“But I never expected she was going to have three.”

The Charolais cow, who goes by the name of Valerie, went into labour on Saturday morning. July 20, and once the first calf was born, Seamus knew there was more to come.

“Several people said I should get her scanned, but I judged her myself by the size of her.” he said, before adding: “She was massive.”

The first calf was born unassisted, however, Valerie required the help of Seamus’ local vet, Gerry Mulvihill, to help with the other two.

Seamus explained: “She gave birth to one by herself and the other two, required the assistance of my vet.”

Seamus confirmed to the Leader that both mother and three calves, which were sired by a Charolais AI bull, are in fine health following the birth. The three calves are comprised of one bull and two heifers. All that remains for Seamus now, is to choose some names for their new arrivals.

In terms of the future of the thriving three, Seamus is adamant they live out their lives on his farm in Drumlish.

He said: “They will be here as long as I’ll be here.

“They won’t be going anywhere.” he vowed.