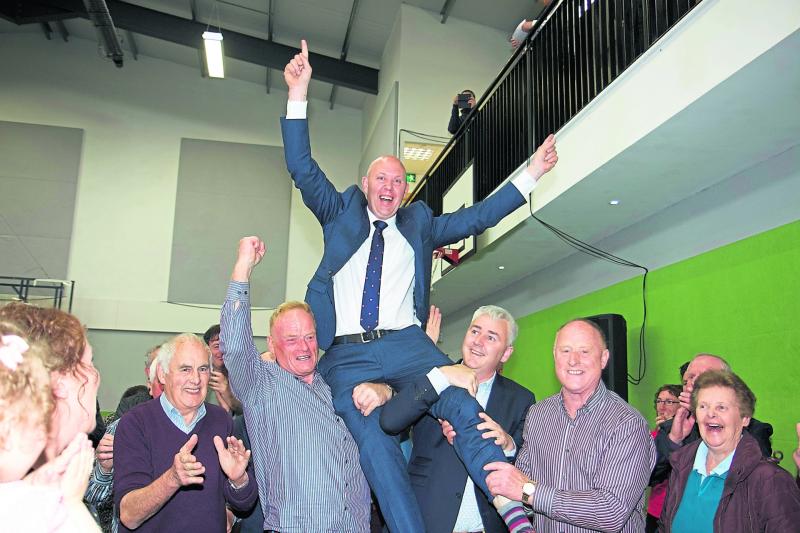 Resounding cheers as Paul Ross and his team celebrate his election after he topped the Ballymahon Municipal District poll with 1,217 votes Picture: Michelle Ghee

It was late on Monday night - or, rather, the wee hours of Tuesday morning - when Longford returning officer Nora O'Farrell announced that the Ballymahon count would be adjourned until 11.30am on Tuesday.

The resulting sigh of frustration from the large crowd still in St Mary's Community Campus, Edgeworthstown, at close to 4am made it quite clear that nobody wanted this to drag on for another day - especially considering Ballymahon MD was the last area in the entire country to declare a first count.

That feeling of frustration only increased later on Tuesday morning when it was announced that an entire recount would take place at the request of Tony Moran (Ind) who was eliminated on the fifth count.

The recount made no difference to the result, though, with Tony Moran once again being eliminated.

The two seats that had been taken by Tuesday morning, before the recount commenced, were filled just after 7pm on Monday night when Paul Ross (FG) and Mark Casey (Ind) exceeded the quota with ease.

With a total of 1,217 first preference votes, Paul Ross surpassed the quota of 949 with 268 surplus votes to be redistributed to other candidates.

And, while his proven track record, friendly and helpful personality and passion to serve the community probably had something to do with that, it was his team and his supporters that a humble Ross credited with his election.

“My wife, Jenny, has been a terrific support to me over the last couple of years,” he said of the woman who stood by his side throughout his campaign.

“People don’t realise the impact politics has on your life. She was totally committed to me. We had a baby in January and the house was obviously very, very busy. She enabled me to go canvassing and I really have to thank her from the bottom of my heart. It was huge to have that support at home to go out and meet the people.”

He was also quick to praise his canvass team who hung posters, knocked on doors, handed out leaflets and helped him on every step of the campaign.

“Without a good team behind you, you can’t get elected, so I’d like to thank them from the bottom of my heart,” he said, before complimenting the staff at Longford County Council for being so accommodating over the past five years.

But it was, after all, the electorate - 1,217 registered electors to be precise - who chose Paul Ross as the first councillor to be elected and for that, he is extremely grateful.

“I got a fantastic vote from the shores of Lough Ree and right into Edgeworthstown. The whole of south Longford came out to support me and I’m deeply, deeply indebted to them,” he said.

“All I can say on that is that I have tried my best and worked hard over the last five years. And I’m going to work doubly hard for the next five years so I can do all I can for the people of south Longford.”

While Fine Gael received a huge level of support in the local elections this time round, there was never a doubt that Independent Mark Casey would also win himself a seat - it wasn't a question of if, but when.

And the 'when' came after the first count on Monday night when Mark Casey was deemed elected immediately after Paul Ross, thanks to 995 first preference votes.

When he spoke to the Longford Leader after his election on Monday, he was visibly swelling with pride and delight at the huge level of support he received.

“All the way across the constituency my vote has been up and it’s a testament to the work I’ve been doing for the last five years, it’s really appreciated,” he said.

“For an independent to come in here with a thousand votes is absolutely fabulous.”

It certainly is an incredible achievement, but not unexpected considering the passion Casey has had for his work as a councillor this past half a decade.

And, as the balance of power comes up for debate with Fine Gael claiming a total of nine seats in the council, he is adamant that no matter what happens regarding control of the chamber, the important thing is ensuring Longford is looked after.

“At the end of the day we have to be a strong council. We have to do what the people want and they’ve spoken and we have to listen to what they’ve said,” he stressed.

Following the eighth and final count in Ballymahon Municipal District on Tuesday night, Mick Cahill (FF) exceeded the quota and was deemed elected. Colm Murray (FG), Pat O'Toole (FF) and Gerard Farrell (FG) were elected to the remaining seats without meeting the quota.