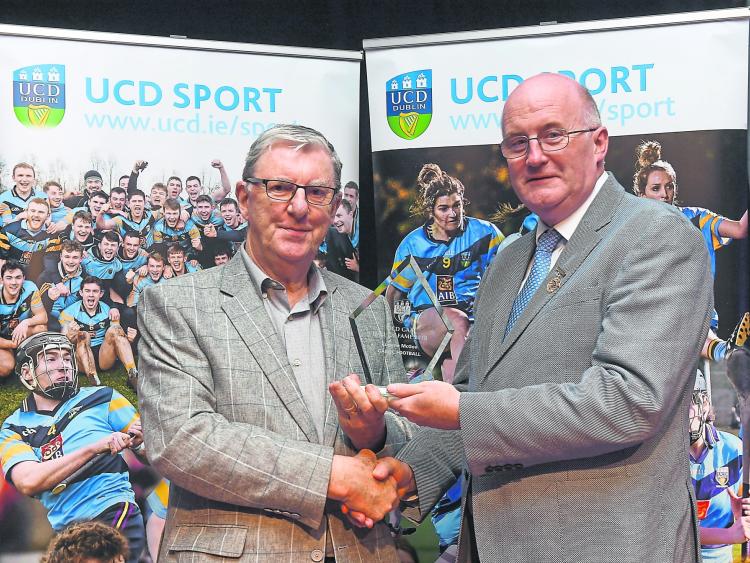 The late Eugene McGee (left), with GAA President John Horan, after he was inducted into the UCD GAA Hall of Fame

GAA President John Horan and the Minister for Transport, Tourism and Sport, Shane Ross, TD, have today offered their condolences on the passing of Eugene McGee.

Minister Ross said, “I am saddened to hear of the passing of Eugene McGee. Eugene had an innovative approach to GAA management and was an honourable and well respected journalist.

“Eugene was renowned for his management of the Offaly team and bringing them to a historic victory against Kerry in the 1982 all Ireland final.  I wish to offer my condolences to Eugene’s wife Marian, family and friends.”

Also read: A Leader And A Cub

Meanwhile, Uachtarán CLG John Horan extended the sympathies of the Association to the family and friends of the late Eugene McGee who passed away early this morning.

Synonymous with his stewardship of Offaly when he managed them to the All-Ireland senior football title of 1982 and Leinster titles of 1980, ’81 and ’82, Longford native Eugene gave a life-time of service to football.

He had earlier carved out a name for himself as a coach of real quality through his success with UCD in Dublin, and was also a former manager of Ireland in the Compromise Rules International tests with victory over Australia in 1990, and also managed Cavan and at club level in Longford.

The Uachtarán said: “Eugene McGee was a giant of Gaelic Football.

“Like Mick O’Dwyer and Kevin Heffernan, with whom he shared so many sideline battle of wits, Eugene was considered a man ahead of his time and responsible for creating a new era of popularity for the game in the 70s and 80s.

“A straight-talking man of great integrity, Eugene was a hugely respected journalist and author and his passion for the game always shone through.

“The GAA benefitted greatly from this passion through his work on the field, and also through his commitment off it where Eugene was instrumental in helping to aid the evolvement of Gaelic football and was a former Chairman of a Football Review Committee.

“He was passionate about rural Ireland and of the important role that GAA Clubs have to play in supporting these communities. Indeed, he was only recently assisting our Community and Health department in an ambassadorial role for an event in Longford.

“On behalf of a very grateful Association I would like to offer our sincerest condolences to his wife Marian, his daughter Linda, son Conor and his many friends throughout the country. Ar dheis Dé go raibh a anam dilís.”