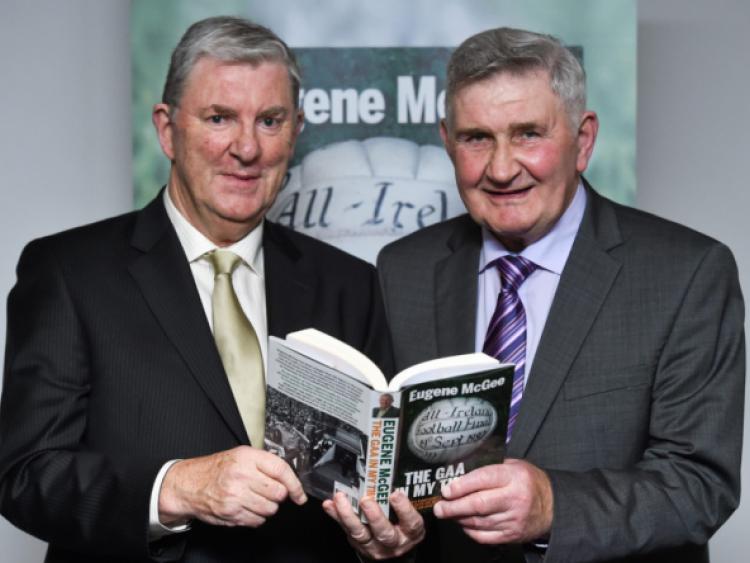 Eugene McGee with Mick O'Dwyer at the launch of his book 'The GAA in My Time' Picture: Matt Browne / SPORTSFILE

Eugene  McGee was born in the  parish of Colmcille in north Longford, the second youngest of seven children born to Owen and Catherine McGee. His father was  a national school teacher or 'the Master'  as he would have been known in those days.

Eugene himself followed the family tradition of teaching for almost a year when he graduated from University College Dublin with a BA and HDip, but the  attraction of journalism soon had his attention.

English was one of his best subjects and, while at UCD, one of his first assignments was  to cover a rugby match between UCD and TCD for the UCD weekly newspaper. He  also wrote for the GAA weekly newspaper, Gaelic Weekly, which began publishing his articles.

Following a strike in the paper in 1983 which lasted 38 weeks, Eugene became the new editor of the Leader and he was in charge of the revival of the paper which had been off the streets  for the duration of the dispute.

His job was to  pick up the pieces  and he had total editorial  control. Faced with the task of  making the Longford Leader the pre-eminent  newspaper not just in County Longford, but in  the midlands, the first step was to recover all the  lost sales from the Longford News, which he did in about  six months. He personalised the paper more and brought in several technological changes.

The Leader was the first provincial paper in Ireland to get agreement with the National Graphic  Association over direct input, which would allow its journalists to use Amstrad computers. He also brought business and administrative changes, and in 1989  he led a management buy-out which took the paper, which was founded in 1897 by J.P. Farrell and had remained in the Farrell family since its foundation, out  of the Farrell family completely, with himself becoming the majority shareholder and Managing Editor.

The Leader is the traditional paper in the County and that inspires loyalty in its readers. Eugene  McGee's editorial policy was for the Leader to be a totally neutral paper. He also saw the paper's  job as defending the local community and to speak up for the local community.

The survival of  the paper after the 1983 strike bears  testimony to its popularity with Longford people and  to the leadership and integrity which Eugene McGee has shown in running the paper. After he retired from the position of Managing Editor of the Longford Leader and writes a weekly column for the Irish Independent.

Eugene McGee, who has given so generously to Longford, is not only known for his journalistic skills but also  for his sporting achievements. He has been one of the most successful coaches and managers in Gaelic football, starting with  the UCD Club whom he coached to six Sigerson Cup wins as well as two Dublin championships and two All-Ireland Club titles in  1974/75.

He  later managed the Offaly  football team which won three Leinster titles and which, stopped the great Kerry team from winning the five All-Irelands in- a-row by beating  them in the All-Ireland Final of 1982. The defining moment came a few minutes from the finish when Séamus Darby scored the memorable  goal which was to give Offaly a one-point victory (1-15 to 17 points) and snatch what appeared to be the Kerry team's place in history right  from under their noses.

He also managed  the Ireland team on  two occasions for the Compromise Rules International Series  against Australia, winning the 1990 series in Australia 2-1.

Eugene McGee's first book Classic Football Matches was published in 1993. The  book featured 30 great football games played between 1955 and 1992 and  showed his great interest in and enthusiasm for Gaelic football.

In  1996 his great writing  skills were manifested again  in St Mel's of Longford: A History 1865-1990,  which tells the story of the diocesan college  for Ardagh and Clonmacnoise since its foundation in  the post-famine era of 1865 right up to 1990 and its outstanding academic and sporting record.

Eugene lives with his wife, Marian, and children, Conor and Linda, adjacent to  the grounds of St Mel's College in Longford. He has been quoted as saying that the best thing he ever got out of Offaly is not the All-Ireland, but his wife!

He is a man of great  integrity and one of the  top journalists who challenged  the GAA in his sports columns on  issues that others did not dare to  raise, while consistently showing his interest and enthusiasm for the sport.

Eugene  McGee has  been an outstanding  journalist, and a great  football manager and expert,  and, in presenting him to you  for conferral of this honorary doctorate, a Sheánsailéir, I  forgive him for 1982, agus anois iarraim ort an gradam is airde  atá ar fail ón Ollscoil seo a bhronnadh air, sin é Dochtúíreacht Oinigh.

* Address by Kerry native Dr Iognáid Ó Muircheartaigh, Pro-Vice-Chancellor of the University, President, National University of Ireland, Galway, on 20 September 2007, on the occasion of the conferring of the Degree of Doctor of Laws honoris causa, on Eugene McGee