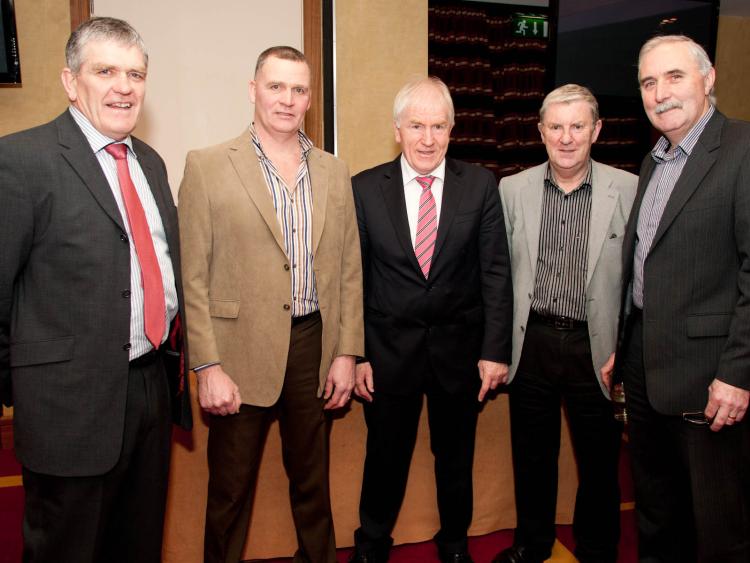 The late Eugene McGee was inducted into the Offaly GAA Hall of Fame in January 2007 and the following is the citation delivered on the night.

“He may be a native of Longford but the induction of Eugene McGee into the football hall of fame will be warmly welcomed by GAA supporters throughout Offaly.

As manager of the Offaly team that captured the All-Ireland senior football championship title in 1982, his place in GAA folklore in the county is assured.

2007 is the silver jubilee of that never to be forgotten success and while the players always take the majority of the plaudits, McGee’s role in the downfall of the most famous and talented Gaelic football team of all time can never be underestimated.

When he was appointed as Offaly manager in the winter of 1976, he was something of an unknown quantity and he came to the county when the great All-Ireland winning sides of 1971 and 1972 were in the process of breaking up.

Football was very much in a transition phase in Offaly and while McGee might have been an unknown quantity in the county, he still had a proven pedigree.

A BA and hDip graduate from university college Dublin, he earned his managerial spurs as an innovative and successful coach with the college. Under his guidance, UCD won two Dublin senior football championship titles, six Sigerson cups and most notably, All-Ireland club titles in 1974 and 1975.

Those were star studded UCD sides and with faithful football hero, Kevin Kilmurray a key member of the 1974 side, McGee came to the notice of Offaly GAA supremo’s as they bid to fill the managerial vacancy after a disappointing championship campaign in 1976.

Considering what occurred afterwards, it almost amazing to recall that McGee’s first championship year in 1977 turned into a disaster when they were evicted by Wexford. At the time, such a result was unheard of but McGee’s bacon was saved by the fact that the Offaly U-21 football side he also managed captured provincial honours and brought down to a replay before suffering defeat in the All-Ireland semi-final.

That was enough to secure him another term and from then, the Eugene McGee inspired revolution began to take place.

Firstly he had to make some very hard calls and decide which members of the 1971/’72 teams to keep and which ones to dispense. Those trend setting players were still heroes in Offaly and some of the decisions did not win any popularity contests on the ground in the county. McGee, however, had a very clear vision of what was needed to bring success to Offaly again and he had no problems making hard and unpopular decisions – by 1982, just Martin Furlong, Sean Lowry and Seamus Darby remained from the great team of the ‘70s, while Eugene Mulligan, Mick Wright, Kevin Kilmurray and Paddy Fenning were instrumental in the Leinster championship success in 1980.

At the time of McGee’s appointment, Kerry and Dublin were in the midst of their legendary rivalry. Offaly’s first task was to overcome the Dubs in Leinster and after ’77, the gap closed every year. In 1978, Offaly lost a controversial game in Portlaoise with Dublin needing to introduce Kevin Moran, who had joined Manchester United and getting a controversial penalty goal.

In 1979, Offaly had Dublin on the ropes in the Leinster final in Croke Park but again lady luck did not smile on them and Bernard Brogan’s late goal denied them. McGee also guided Offaly to a Leinster u-21 football championship final in 1979.

In 1980, however, Offaly finally overcame Dublin in a teak tough Leinster final and the faithful were back in the big time. Now it was Kerry that were in their sights.

In the 1980 All-Ireland semi-final, Kerry won a high scoring game by 4-15 to 4-10, with Matt Connor and Gerry Carroll contributing all Offaly’s scores. In the 1981 All-Ireland final, Offaly were not as far away as the 1-12 to 0-8 final scoreline suggests, with Jack O’Shea’s late goal clinching victory.

1982 was arguably the most famous year in football history. Kerry were bidding for an unprecedented five in a row and regarded as unstoppable. As five in a row mania gripped the kingdom and premature songs and t-shirts emerged on the scene, Offaly quietly prepared away from the limelight.

With McGee calming public expectations and instilling a belief in the players that they were good enough to succeed, Offaly hammered Dublin in the Leinster final. In the All-Ireland semi-finals Kerry annihilated Armagh while Offaly were decidedly unimpressive when edging out Galway by a point.

Kerry were raging hot favourites for the September 19th show down but McGee had his homework done. He pulled a master stroke by selecting Richie Connor at centre half forward to curb the influence of the late Tim Kennelly. Earlier that year, he had observed one Seamus Darby scoring a great goal for Rhode and Darby, who had drifted off the county scene, was brought back into his panel. With the game in the melting pot, Darby was introduced in the second half and it was his famous late goal that secured a never to be forgotten victory for Offaly.

A disappointing Leinster final defeat by Dublin in 1983 followed by an unsuccessful year in 1984 ended McGee’s reign in charge of Offaly as Matt Connor’s accident and the departure of a number of other key players brought that era to an end.

Tactically astute, McGee was a superb physical trainer and by 1982, his team were in peak condition. Players from that era still wear anguished grimaces when they speak of the severe spring time hill training in Rhode. McGee was also ahead of his time and in 1982 Offaly went on a training holiday to Spain – training holidays may be the norm now but were unheard of in ’82.

He also possessed a ruthless streak and always acted in the best interests of Offaly football. He was not afraid to tell players, some of them still heroes in Offaly, that their time was up while there was also a change of selectors after the 1979 season.

After resigning as Offaly manager, he later managed Cavan while he has always maintained a keen interest in his native county and was instrumental in drawing up a five year development plan in Longford some years ago.

He has never forgotten his time in Offaly and in 2004 when the senior football squad embarked on a highly publicised strike following the resignation of then manager, Gerry Fahy, McGee was appointed as a mediator between the players and county board.

He spent countless hours in the county in those difficult days as he bid for a solution to the problem. He drafted the agreement that has resulted in cordial relations ever since between the squad and the county board, and still plays a role in overseeing this.

He has always retained a genuine affection for Offaly. Now retired as managing director of the Longford leader, McGee’s weekly Monday column in the Irish Independent is the first stop for most GAA supporters while he also does analyst work for Setanta sports. One of Offaly’s most popular adopted sons, ladies and gentlemen, the latest inductee into the football.”