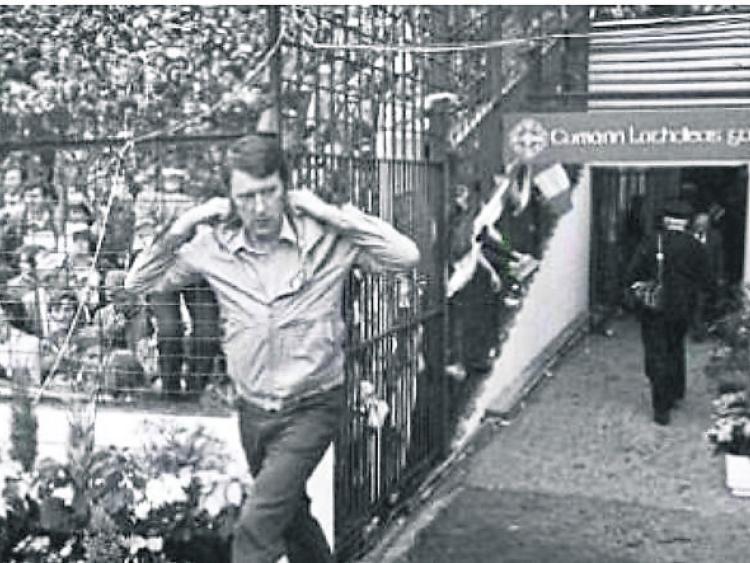 After he masterminded ‘the greatest one in-a-row in history’ on September 19, 1982, Eugene McGee sneaked away from delirious Offaly fans, kneeled down on the Croke Park sod and thanked the Almighty and his late brother Fr Phil for what he had achieved.

The RTÉ documentary, ‘Players of the Faithful’, which brilliantly told the story of how McGee’s charges famously ended Kerry’s bid to become the first county to win five All Ireland football titles in a row, was broadcast on RTE One last Friday night and it gripped the country, receiving a massive positive reaction online.

In his own book, ‘The GAA In My Time’, Eugene explained, “Preventing the five in-a-row was never a target for me, I was merely aiming to win an All-Ireland as a team manager and get satisfaction for a coaching programme that started in 1976.”

‘Players of the Faithful’ features a host of contributors, including GAA historian Paul Rouse who suggested that if you look outside sport ‘all empires crumble eventually as do all great teams’.

Mighty Kerry were raging red hot favourites to win the ‘82 final and the Kingdom hype machine was in overdrive. "It looked like this would be just a coronation," pointed out McGee.

With Offaly trailing 0-11 to 0-12 early in the second half, Kerry were awarded a penalty and Mikey Sheehy’s strike was saved by Martin Furlong.

Furlong said of McGee, “He was different. He wasn’t a guy you got close to.” McGee highlighted how he had ‘a lot of faith’ in Furlong to save the penalty and he did. It was a huge moment in the context of sowing seeds of doubt in Kerry minds.

Commentator Micheál O'Hehir wondered if “There was a goal in the game!" and McGee and his selectors played their trump card, springing Seamus Darby from the bench, in place of John Guinan.

“This move probably changed the course of football history as Doyle had hardly ever played at corner back with Kerry,” outlined McGee in his book.

He put it slightly more bluntly during the documentary, "If you got it wrong (defender under a high ball), you were bollixed."

The wily Darby gave Doyle the slip, fielding a high Liam O’Connor delivery, and the super sub knocked rain drops off Charlie Nelligan’s net at the Hill 16 end - the goal that rocked the nation. Offaly 1-15 Kerry 0-17.

“It defies logic how that match lingered so strongly in public opinion,” said McGee.

It traced Offaly’s steady progress, halting Dublin in Leinster in 1980, learning from their clashes with Kerry in ‘80 (the All-Ireland semi-final in which Matt Connor scored 2-9 as Offaly lost by 4-10 to 4-15) and in ‘81, and gaining the belief that they were getting closer to toppling Mick O’Dwyer’s men.

Maloney hailed Matt Connor as the greatest footballer he ever seen and McGee said Matt was a genius. A serious car accident cut short Matt’s playing career, prompting Furlong to say, “Matt’s injury was an awful blow to Offaly. It knocked the bottom out of us.”

McGee said he was ‘quite proud’ Offaly grabbed an All-Ireland title during a period when Dublin and Kerry so dominant.

If you missed ‘Players of the Faithful’ last week, you should check it out on the RTE Player.