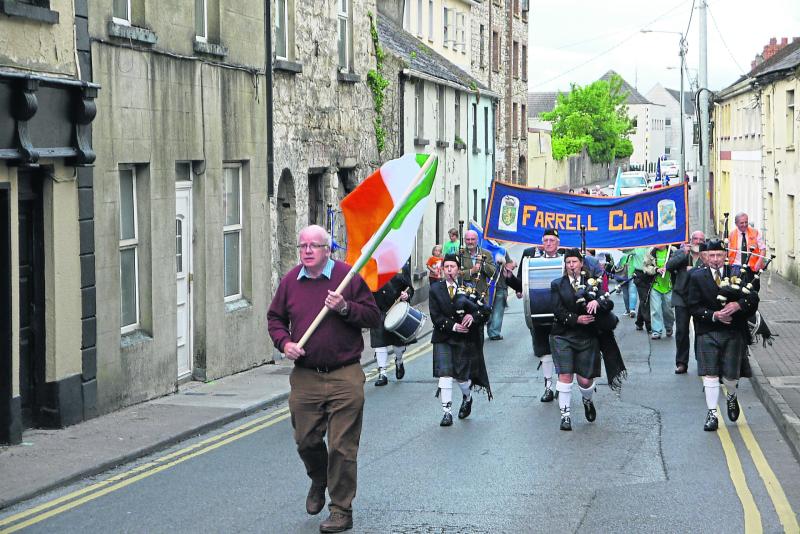 The United Nations did not assemble in Co Longford last week, it just seemed like that as members of The Farrell Clan arrived from all over the world for the Silver Jubilee Farrell Clan Rally.

It is said that home is where the heart is, and for the Irish diaspora, Ireland is the homeland. For Farrells across the globe, Longford is their heartland.

Some visitors like Thomas, Carmen Joseph and Antonia from Malta were making their first visit, while for Tim and Julie from North Carolina this was their sixth trip.

For some, like Gillian Farrell from Dorset, England, it was a personal mission as she came in search of her ancestors’ burial place and found it in Clondra.

Others, like Mary and Brianna Farrell from New Jersey, came to meet their DNA cousins.

From New Zealand, Julie and Mike took in the re-union as part of a camping holiday.

Maria Cecilia and Patricia Maria from Argentina were keeping up a family tradition started by their late mother, Sheila, 25 years ago.

The Irish Farrells came from North, South, East and West; Donegal to Waterford and Dublin to Galway.

Following a Civic Reception in Aras an Chontae hosted by Longford County Council, Pat Farrell from Cork City carried the national flag as he led The Longford Pipe Band and the parade of Nations through the streets of Longford town.

Included in a packed programme were tours of North and South Longford. On Tuesday the Clan followed the Edgeworthstown Trail and also visited Granard before experiencing an American Wake in The Haggard in Moyne.
On Thursday, the group toured Ardagh, Moydow, Corlea Visitor Centre in Kenagh, concluding in Abbeyshrule.

Those who come in search of information or help with finding information attended a lecture in Longford Library given by Martin Morris on Wednesday morning and were entertained with a historical talk from Turtle Bunbury in the Longford Arms on Wednesday night.

The Farrell Clan took the opportunity to remember deceased members of the Clan with a tree planting ceremony in The Remembrance Garden, Water Street.

A plaque was also unveiled at Moatfarrell, the ancient inauguration site of the Clan Chieftain, on Friday afternoon.

The group also enjoyed a walking tour of the town beginning at St Mel's Cathedral.

For the duration of the Rally, an Exhibition of Farrell Clan Memorabilia and other historical artefacts was on display in the Longford Municipal Authority Chamber on the Market Square.

This proved very popular with visitors and locals alike who took the opportunity to mingle as they viewed the exhibition and reminisced about the past.

The Grand Finale of the week was The Silver Jubilee Clan Banquet on Friday night.

Ceann Comhairle, Sean O’Fearghail, honoured the Farrell Clan by travelling from Co Kildare to address the assembled clan at the banquet in the Longford Arms.

The whole week was a testament to the old saying ‘There are no strangers, only friends we have not yet met.’

The Clan organizing Committee and International Clan members are especially grateful for the Civic Reception which the Local Authority hosted.

Thanks also for the use of the Municipal Authority Chamber to host the exhibition, closure of roads to enable the parade and facilitating the planting of a tree in The Remembrance Garden.

Thanks also to Longford and Granard Gardaí, Longford Civil Defence, Longford Pipe Band and parade stewards Margaret, Phil and Padraic for their help.

Read Also: Celebrating Farrells from around the world in Longford

The Longford Leader and Shannonside were invaluable in promoting the event. The Staff at Longford Library, Martin Morris, Turtle Bunbury, Maurice Gleeson, Matt Farrell, Paul Flood, Sr Maebh, Anne Gerety Smyth, Breda Mollaghan, Noel Carberry and the staff at Corlea Visitor Centre and Philip Butler all contributed to the success and enjoyment of the rally.

The visitors were high in their praise for the excellent quality of food served in the county. Credit goes to The Rustic Inn, Abbeyshrule, John and Freda Farrell Contempory Foods, Courtyard Café, Feericks Rathowen, Dial a Chef Ballinamuck, The Haggard Moyne, Coffee House 45 Dublin St, Clarkes Greyhound Bar Dublin St and of course the Longford Arms Hotel who excelled with an excellent banquet.

We would also like to thank Brendan Farrell for donating a beautiful mountain ash tree for the Remembrance Garden, Pat O'Rourke and LCRL for the beautiful plaque at Moatfarrell.

Thanks to the musicians, singers, dancers, story tellers, poets and actors who entertained the visitors. For many the highlight was the visit to Castlerea Castle and for access to the castle we thank the Higgins family, Moydow.

Finally, we wish to thank the people of the county for their kindness, friendship and the welcome they extended to our visitors.