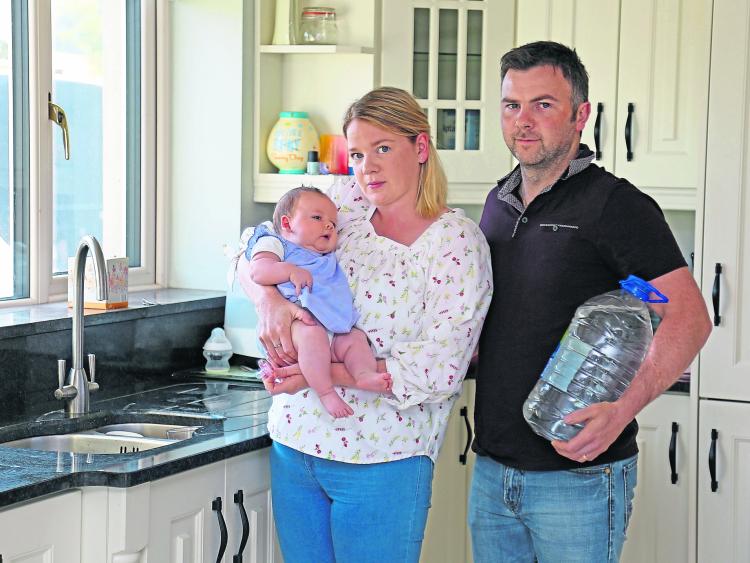 Michelle, Lucy and Ray Lynch, whose home has been without running water for almost two weeks. Photo: Shelley Corcoran

A young Co Longford mother without water for the past nine days has said she and her husband are in the midst of a “living nightmare” as the county faces into another week of planned outages.

Michelle Lynch said she and her husband Ray spent last weekend with her sister in Mayo where the couple could avail of clean running water to wash and more pertinently bathe the couple's seven week old daughter, Lucy.

Speaking to the Leader on Monday evening, Michelle said despite Irish Water laying on water tankers in the Granardkill area, she couldn’t take any chances when it came to the safety and well being of her and husband Ray’s new arrival.

“The whole thing is an absolute mess,” she said, just hours after returning to the couple’s newly built home in Toneywarden, on the outskirts of Granard town.

“This is day nine now. We can’t even have a wash and Ray has to keep going up to the attic to fill the tanks so that we can flush the toilets.

“We can’t even make feeds up or bathe her (Lucy) because I am afraid about the water coming out of the tanker so we are using bottled water to do it.”

The plight facing the couple is one of several luckless instances to hit the surrounding townlands of Granardkill, Toneywarden, Ferriskill and Leitrim.

Irish Water currently has three static tankers in place for domestic customers adjacent to Granardkill Old Cemetery while a standpipe facility is also in situ for other users at the rear of Granard Garda Station.

Michelle’s parents who live next door have also been hit, prompting her father, Padraig to similarly hit out: “It’s gone beyond a joke at this stage.”

Outdoor staff have spent the past week desperately searching for a leak, which is believed to have hastened the north Longford town’s water difficulties.

And, while those efforts continue apace this week, it’s understood a lack of pressure sparked by low water volumes in a nearby reservoir may also be preventing supplies from being returned to affected households.

All that Michelle wants at this stage, however, is answers.

“The heat is chronic as well and I can’t bring her (Lucy) out in the car even which means I am relying on my parents and husband to bring water into the house the whole time,” she said.

“We haven’t been told anything and when we do ring the Council or Irish Water they tell us nothing.