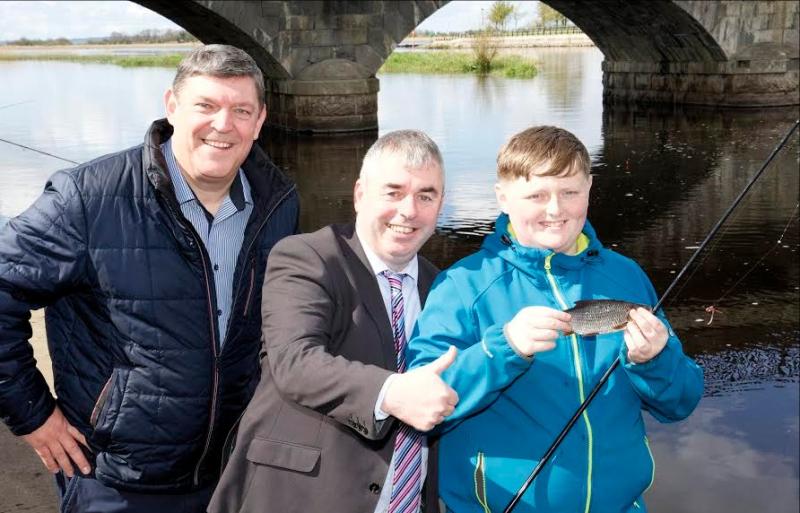 Cllr Mark Casey with Minister for State at OPW, Kevin Boxer Moran and Luke Connors of the Killinarden Youth Initiative whose members spent the day fishing on the River Shannon at Lanesboro last Saturd

With Seán Canney expected to confirm his departure from the Independent Alliance political grouping later this afternoon, Minister of State for the OPW, Kevin ‘Boxer’ Moran said; “these things happen in politics”.

The Minister was speaking in Lanesboro prior to a meeting of the Independent Alliance in Athlone on Saturday where it was confirmed that he would continue in his role for the lifetime of the Government.

The Alliance also released a statement on Thursday, April 19 backing Minister Kevin ‘Boxer’ Moran and supporting the work he has been progressing while in office.

Issues within the Alliance reached fever pitch over the last few weeks as it emerged that difficulties has arisen between Boxer and his predecessor over who would continue in the ministerial role.

“This is nothing new to me,” said Boxer, before pointing out that there have been internal difficulties within the political grouping since last October.

“The Independent Alliance met last Thursday and the Alliance in its entirety has accepted that I am the minister.

“These things happen in politics it’s just unfortunate that we are in government; everyone is saying we are fighting for a job.”

Read Also:  The 'Boxer' will be staying in ministerial ring

The Minister says that the coin which was flicked between Sean Canney and himself  was about getting the job first.

“There was nothing else on the table - and if people only think back to that day, it was done so fast,” he continued.

“We met the Taoiseach, Enda Kenny at that time, and he was only giving two jobs.

But, Boxer claims now that the Independence Alliance fought for more.

“People are very critical over the decision being made at the flick of a coin; all we had was 15 minutes at the time, so how else were we going to decide?

The Minister went on to say that at the time Séan Canney became the Minister first and the agreement was that Boxer would take over the role after 12 months.

“There was never a deal about a changeover after me, and the Independent Alliance has made a decision now that I am the Minister.”

Boxer went on to say that it was time to call a spade a spade, and to be honest, because nobody thought that the Government was going to last beyond the terms made available to both Séan Canney and himself.

“Thankfully it has for the sake of the people of this country and we are not looking back at a snap election,” he added.

“I think Longford/Westmeath has benefited from having a minister at the table because we can deliver in a number of projects throughout the constituency.

“The Taoiseach is the only one now that can tell me to step aside and he is the one that has told me that he wants me to stay on in the job for the lifetime of this government.

“I’m happy to continue on in my role; jobs means nothing to Boxer, people mean more.”