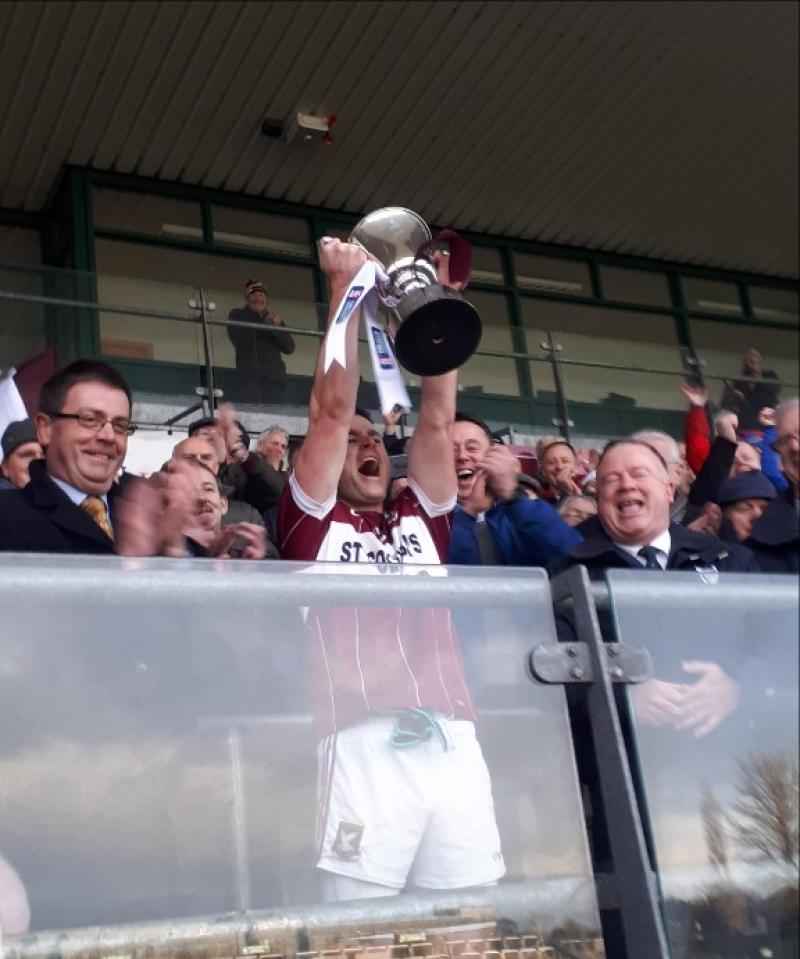 There were magical scenes and a huge outpouring of sheer delight as team captain Shane Mulligan accepted the silverware from Leinster Council Chairperson Jim Bolger afterwards.

Mickey Graham’s Mullinalaghta trailed 0-6 to 1-6 after 51 minutes, but they doggedly stuck to their guns and were ultimately rewarded for their never say die attitude and remarkable team ethic that frustrated the raging hot favourites.

Gary Rogers’ 58th minute penalty was perfection in its execution and it put the Longford champions of the past three years 1-7 to 1-6 in front. Aidan McElligott quickly added another point and shell shocked Kilmacud, who had Dubs inter-county star Cian O’Suillivan red carded in injury time, weren’t afforded the opportunity to recover.

Mullinalaghta were truly heroic and their memorable deeds will provide Longford GAA with a huge fillip. Remarkably, in 1968 Longford won their only Leinster Senior Football Championship title and fifty years on, the county now has a club worthy to call provincial champions.

Patrick Fox was deservedly named Man of the Match for his superb defensive job on Crokes danger man Paul Mannion, while Donal McElligott, John Keegan, David McGivney, Rian Brady and Gary Rogers were among the other stars in what was a high octane and passion filled Mullinalaghta victory.

Next up for Mullinalaghta is an All-Ireland semi-final against the vaunted Dr Crokes of Killarney early next year. But they'll savour this triumph first before worrying about the Kerry men !!

Aided by the strong breeze, Mullinalaghta began impressively as John Keegan won possession from the throw-in and promptly fed Rian Brady who delivered the opening point with just 12 seconds gone on the clock.

The Dublin champions responded with menace. Mullinalaghta’s Shane Mulligan had the misfortune of losing his footing on the slippy sod in the 4th minute as he attempted to place a pass and Kilmacud countered at pace, and with Paul Mannion, Shane Horan and Stephen Williams trading passes, Pat Burke found himself unmarked on the edge of the small square and he drilled the ball to the twine beyond Patrick Rogers.

James McGivney put Rian Brady clear in the 9th minute and he was extremely unlucky to see his delicate shot go over the bar when a goal looked the more likely outcome, Mullinalaghta 0-2 Kilmacud 1-0.

Callum Pearson clipped over Kilmacud’s only first half point from play in the 11th minute, 1-1 to 0-2.

Conan Brady accounted for Mullinalaghta’s 3rd wide of the match and David McGivney dropped a free short as the Longford champions, who were tackling ferociously, were gaining a foothold but struggling to making it count on the scoreboard.

Kilmacud lost corner back Liam Flatman through a lazy 17th minute tackle on Jayson Matthews and three quick-fire points inside two minutes put Mullinalaghta ahead for the first time since the opening seconds.

Rian Brady and Donal McElligott registered points, levelling matters at 0-4 to 1-1. The men from the ‘Half Parish’ on the Longford/Cavan border then surged ahead in the 19th minute when Aidan McElligott was fouled and David McGivney converted the free with aplomb.

Keegan kicked Mullinalaghta’s 4th wide in the 20th minute and it was Kilmacud who enjoyed the better of the closing ten minutes of the half. However, they struggled to break down an absolutely resolute Mullinalaghta rearguard where Patrick Fox, in particular, was exceptional as he kept tabs on Dubs All-Ireland medal winner Paul Mannion.

In first half injury time, Conan Brady was penalised for an accidental trip on Callum Pearson, and Mannion converted the free, leaving the teams deadlocked at the interval, Mullinalaghta 0-5 Kilmacud Crokes 1-2.

Second Half
Against the breeze and playing towards the Arden Road end of Bord na Móna O’Connor Park, Mickey Graham’s Mullinalaghta charges carved open two half chances at the beginning of the concluding moiety but both drifted wide.

Kilmacud, AIB All-Ireland club winners in 1995 and 2009, opened up a three point advantage between the 38th and 48th minutes as imposing midfielder Craig Dias, the lively Callum Pearson and Paul Mannion (free) found the target.

Mullinalaghta, who refused to fling in the white towel, desperately needed a score and it arrived in the 50th minute when James McGivney held onto possession and was fouled. The free was duly converted by Rian Brady, 0-6 to 1-5.

Three minutes later, just as he had done all afternoon, Donal McElligott surged forward, spliced open the Kilmacud rearguard and laid off a perfect pass to his brother Aidan who was hauled down by Cian O’Sullivan and referee David Gough had no hesitation in awarding a penalty.

Unlike Portlaoise’s Craig Rogers in the semi-final, Mullinalaghta’s Gary Rogers held his nerve and he confidently left the ball nestling in the corner of the net beyond the despairing dive of Crokes ‘keeper David Nestor. It was a super strike in a pressurised cauldron, 1-7 to 1-6.

With their confidence soaring, Mullinalaghta went for the jugular and Aidan McElligott contributed a fine point himself to leave two points separating them, 1-8 to 1-6.

The five minutes of added of time were tension filled but Mullinalaghta held their composure and discipline and wild scenes of jubilation greeted the final whistle and everyone in the ‘Half Parish’ invaded the pitch to congratulate their heroes.