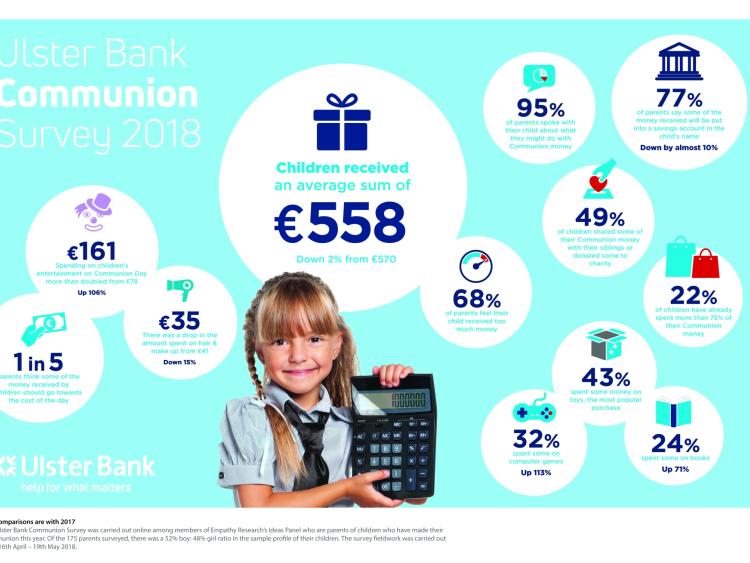 There has been an increase in Communion spending by parents this year according to the 2018 Ulster Bank Communion Survey. Total overall spending on the occasion per respondent rose year on year from €845 to €860 (an increase of 2%).

The largest increase was in the amount spent on children’s entertainment on the big day, a 106% increase from €78 to €161.

While the spend on entertainment jumped, there was a considerable drop in the amount spent on hair/ make up (from €41 in 2017 to €35 in 2018, a 15% decrease), as well as more modest year-on-year drops in spending on Communion outfits for children and party items/ food and drink.

The detailed breakdown of spending is as follows:

With regards to overall attitudes to Communion spending, just over half (53%) of parents agree that there is pressure to spend as much money on the day as other parents. There has been a 73% increase in those who claim they would rather save the money for birthdays or summer holidays instead, from 30% to 52%.

Money received
Communion Day has traditionally been the first time that children receive a significant amount of money. The amount received decreased slightly this year by 2%, from €570 per child to €558. One in five children (21%) received more than €800, and 68% of parents felt that their child received too much money. Girls received an average of €577 in 2018, an increase of 5% from €550 the previous year. Boys on the other hand saw a drop in the amount they received in 2018 from €591 to €541 (down 8%). Encouragingly, 95% spoke with their child about what they might do with Communion money. On an equally positive note, almost half (49%) of children shared some of their Communion money with their siblings or donated some to charity.

Children’s spending & saving
The 2018 Communion Survey shows that children have spent more of their Communion money, with parents reporting that of the total sum received, 39% had already been spent. This compares to 30% in 2017 and only 25% in 2016. 22% report that their child has spent more than 75% of their Communion money, compared to 11% of parents last year. Only 10% say their child has spent no money yet.

With the figures showing an increase in the likelihood of children to spend the money gifted to them, the survey also looked at what they were most likely to buy, with a 113% increase in the popularity of computer games.

While a significant majority (77%) of parents report that some of the money received will be put into a savings account in the child’s own name, this represents a year-on-year trending drop from 85% in 2017 and 90% in 2016.

Commenting, Elizabeth Arnett, Head of Corporate Affairs, Ulster Bank said: “We learn habits at a very early age, and the savings habit is an important one. A child’s Communion Day will likely be the first time they have received a significant sum of money, and it’s encouraging to see from the survey that 95% of parents talked to their child about the money they might receive and how they might use it. Advice like this is key and Ulster Bank helps to build on this through its MoneySense programme in schools around the country. Using games, quizzes, videos and vox pops, it helps to make spending and saving more relatable to children. According to the survey, almost 6 in 10 children already had a savings account with money received from Christmas and birthdays, so that’s a strong base to build on.”

Funding of Communions
The vast majority of respondents funded Communion expenses from their savings again this year (89%), with others seeking assistance to meet the costs. The source of this assistance varied year on year, with the number taking out loans decreasing by 22% to 7% of respondents, while 9% of respondents sought help from family and friends, an increase of 13%.