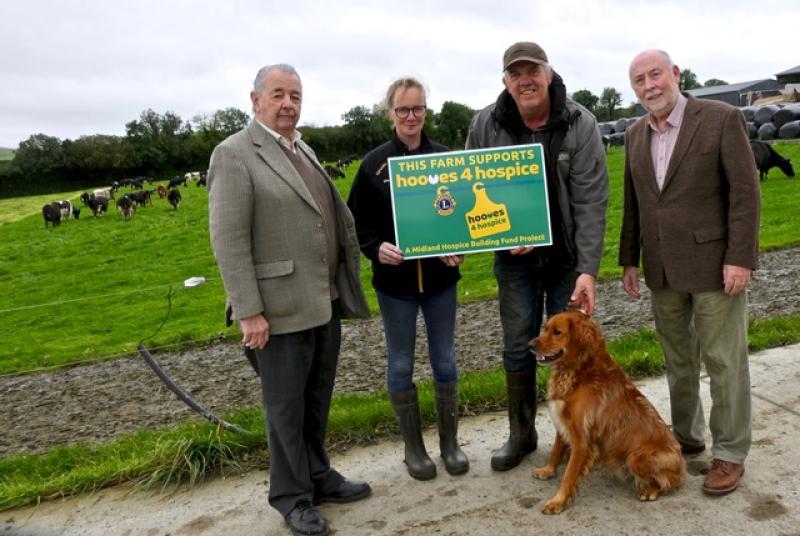 AN important milestone in the Hooves 4 Hospice fundraising project for a proposed Midlands Hospice was passed in late September when the 100th animal was sold at Roscrea Mart.

The fine FHX heifer was donated and reared by Eoin and Colette Toohey of Cullemwaine Dairies, Cullemwaine, Moneygall, Co Offaly.

Such is the support of the Toohey’s that they have donated and are now rearing another fine FHX heifer for the project.

The proposed Midlands Hospice will serve Offaly, Laois, Westmeath, Longford and Laois and will be constructed on a site at the Midland Regional Hospital in Tullamore.

Commenting on the landmark sale of the 100th sale, Pat Lalor, the chairperson of the Lions Clubs project, said he and his colleagues are overwhelmed and humbled by the generosity of farmers support for the project.

‘The fact that 514 young animals were registered during the Covid-19 pandemic speaks volumes. The figure far exceeds our most optimistic projections before the pandemic intervened.

“What really pleases us now is that many of the farmers whose animals have been sold, are, like the Toohey’s, offering to rear another animal for the project.

“We are very pleased too that media coverage of Hooves4Hospice has resulted in growing financial support and goodwill towards our project from the wider community.

“The terrific support we are experiencing for our fundraising project demonstrates the very generous support there is for a Regional Hospice in the Midlands. All other regions either have that type of facility or have approved plans for one. We are concerned that our successful fundraising work is being met by a rising tide of inflating building costs. The people of the Midlands deserve the support of our government and the HSE in devising a workable plan that will result in a specialist end of life service being established locally”.