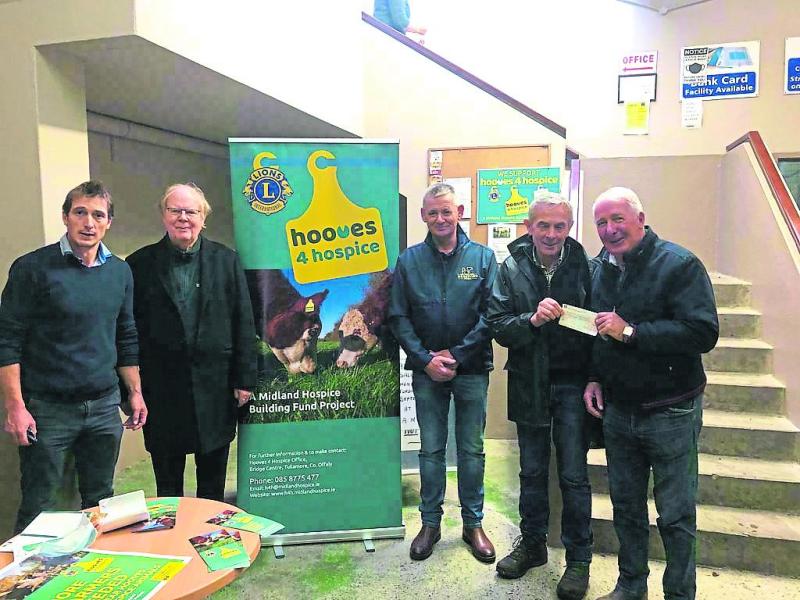 One of the largest Hooves 4 Hospice sales, to date, took place on Thursday last, at Ballymahon mart, where fifteen animals donated by local farmers were sold for over €15,000 for the H4H Project.

Eight of the animals were from the Gowing Forward Group (farmers from the Moate area organised by Bernard Maxwell), six from Hereford Prime and one from Longford/Westmeath Businessman Christy Maye.

Lions Clubs in the Midlands have joined forces with the farming community, supportive organisations and individuals in a fundraising project, named ‘Hooves 4 Hospice’, that has the potential to raise a sizeable sum of money towards the cost of building the much needed Midland Regional Hospice.

Pat Lalor, Chairman H4H, thanked all the farmers involved for their support and generosity towards the project; Mr William Jones Manager and Staff of Ballymahon Mart for their assistance and cooperation with the sale.

To add to the unique occasion, the Maye Family/Greville Arms Hotel, sponsored a bottle of whiskey for each of the buyers.
For more information; website: h4hmidlandhospice.ie.