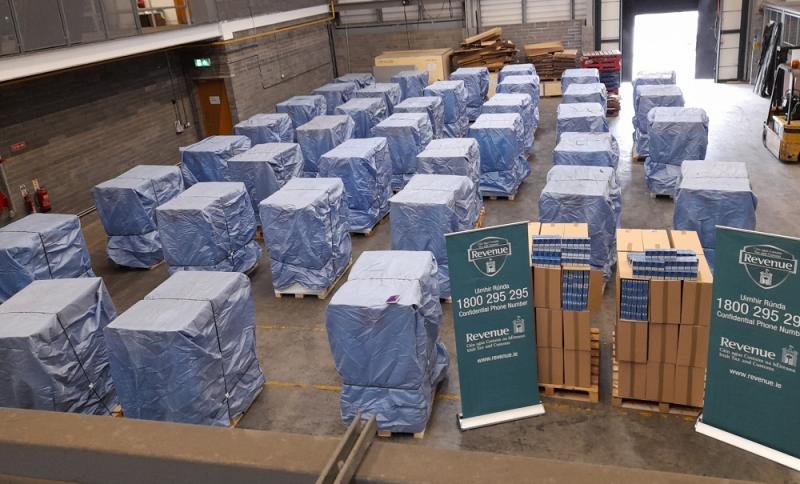 A recent seizure of illegal tobacco by Revenue

The seizure of 13.5 tonnes of loose raw tobacco seized by Revenue so far this year indicates the likelihood of large-scale illegal cigarette factories operating on the island of Ireland, according to Retailers Against Smuggling (RAS).

To date Revenue has announced four major seizures of loose raw tobacco with a combined estimated retail value of €8.1 million, representing a potential loss to the Exchequer of €6.7m.

'One of a kind': Community in mourning following tragic death of popular Newtownforbes hairdresser

Commenting, RAS national spokesperson, Benny Gilsenan said: “The significant volume of the consignments being seized, and the elaborate means being used to conceal this raw tobacco suggests that it’s unlikely the product is intended for direct resale to the consumer on the black market. The recent spike in these types of seizures has risen suspicion among legitimate retailers that the intended destination is likely to be illegal cigarette making factories operated by criminal gangs in either the Republic of Ireland or Northern Ireland.

“In 2018, Gardaí and Revenue officials uncovered the first illegal commercial-scale cigarette production plant found in the State in Jenkinstown Co. Louth, which was capable of producing up to 250,000 cigarettes per hour. During that raid up to 66 tonnes of raw tobacco were seized which gives us sense of the volume of tobacco product required to run such an operation.

"The fear among retailers is that the volumes of raw tobacco now being seized at Irish ports are at a level which indicates that similar underground facilities are operational on the island of Ireland. For example, we know that roughly 13-15 million cigarettes could be produced from the 13.5 tonnes of raw tobacco seized alone, and we suspect further large volumes are getting into the country undetected.”

Mr Gilsenan added: “Since the Jenkinstown raid several other illegal factories have been uncovered, primarily around the border regions, which suggests a link to illegal cross-border trade and criminal activity. The most recent seizure of an illegal factory on the island was in Armagh in July this year, which could produce 390 million cigarettes a year. While we fully commend and support the work of Revenue and An Garda Siochána as well as their counterparts in Northern Ireland in detecting smuggled tobacco and cigarettes, we believe more can be done by policymakers to tackle the growing illegal trade in tobacco products in Ireland.”

In its recent Pre-Budget 2022 submission to Minister for Finance, Paschal Donohoe TD, RAS highlighted how continuous excise increases on tobacco are fuelling demand for a growing black market. This is resulting in increased levels of smuggling activity, impacting registered and legitimate retailers who face unfair ‘competition’.

“The operation of illegal cigarette factories is just one challenge facing the retail sector. We are also very concerned by the additional spate of illicit cigarette and roll your own (RYO) tobacco seizures by Revenue so far this year. To date over 35 million cigarettes and over 20 tonnes of RYO tobacco have been seized highlighting just how active the black market currently is. The combined estimated retail value of all seizures this year amounts to over €45 million, close to €8 million more than the total for 2020.

"We are calling on Government to consider the impact this increased rate of smuggling is having on retailers. The continued growth of the black market can only be halted by stopping the continuous excise increases on tobacco products, the retail price of which is 121 per cent above the EU average according to a new Eurostat survey issued today”, Mr Gilsenan concluded.