They are the sentiments being expressed this evening by publicans as dozens of pubs prepare to reopen tomorrow for the first time this year and many since the start of the pandemic.

As part of the easing of Covid restrictions, pubs across the county can reopen offering an outdoor service with indoor drinking and dining not scheduled to resume until July 5.

The Leader was out and about in Longford town this afternoon to gauge what can only be described as a prevailing sense of eagerness and almost mild impatience amongst the local vintners industry.

"It's great to be back," said local publican John Duignan and proprietor of Longford's 'Tally Ho' establishment, as he looked out on his new purpose built outdoor seating area.

"There are literally too many people to thank for making all of this possible.

"It's a new direction and I would like to think it's much more than an outside drinking area."

Mr Duignan, who is at the helm of a fourth generation family run business, conceded that while the past 15 months had been arguably the toughest in the industry's history, the signs for the future remained positive.

"But we would be asking as many people as possible to shop local as this (reopening of pubs) is a step in the right direction."

Those same beliefs were ones which were shared by fellow Longford publican Andy Byrne.

"It's (reopening) long overdue," he said, as he told of how his own bar's new outside drinking area could seat between 40 to 50 patrons.

"It's been a tough year and a half, there's no denying that but it's got to the stage now where people want a sense of purpose back in their lives.

"It's onwards and upwards from here." 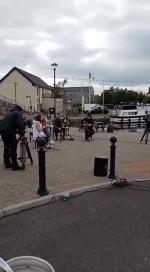 Country music lovers were given an unexpected treat on the banks of Clondra Harbour last night, courtesy of an impromptu performance from musical stars Nathan Carter and Sharon Shannon.

Judge tells Longford solicitor: "You are on legal aid and you really should do a bit of work”

Pair in comical exchange over location of Azerbaijan