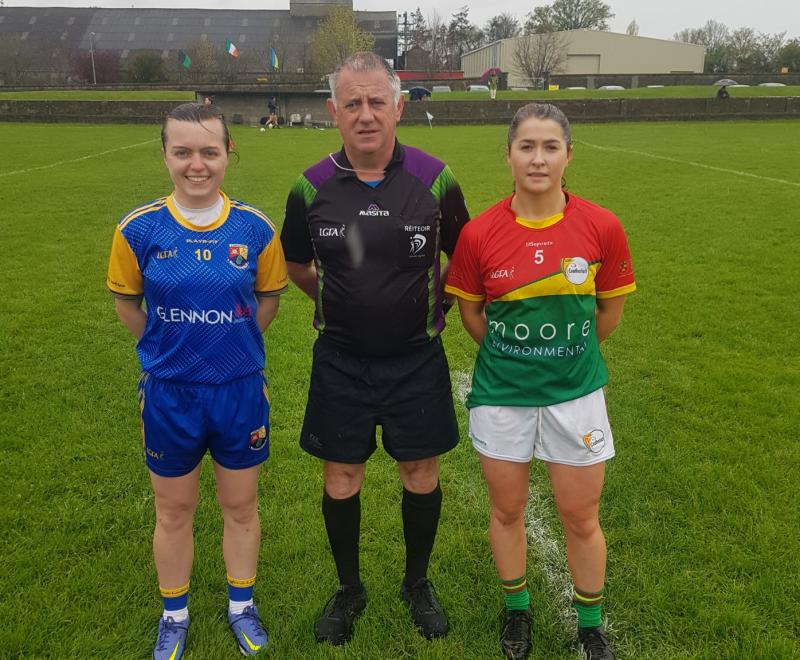 This is a home fixture for Longford who played Kildare in round two of the Lidl NFL also at home in Emmet Park Killoe back in March. On that occasion the Kildare girls ran out six point winners over Longford.

Sunday next is a new game and Brian Noonan’s charges, following their good win over Carlow, will be hoping to put winning performances back to back. However, it will take a big performance from the full Longford panel throughout the hour to get over the line against the Lilywhites.

A great game is in prospect here with the winners putting themselves in a decent position, ahead of round three, to qualify for the 2022 Leinster Intermediate championship semi-final.

The game will be played in Monaduff GAA Park Drumlish and will throw in at 2pm. This is a ticket only affair and tickets can be purchased online on Longford social media pages.

Longford ladies football supporters are urged to come out to the Drumlish venue on Sunday next to cheer on our Longford senior ladies team. Best of luck to the Longford panel and management.

Longford ladies made the long journey down to McGrath Park, Bagenalstown, Co Carlow on Sunday last to play Carlow in their first round TG4 Leinster Intermediate championship game.

On a very wet day for football, Longford got their 2022 TG4 Leinster intermediate campaign off to a good start defeating the home side by a ten-point winning margin. The first half of this game was tight with only two points separating the teams at the break. Half time score Longford 0-8 Carlow 0-6.

Longford gradually got on top in the second half and in doing so scored four second half goals. The first a brilliant penalty from the boot of Michelle Farrell followed by goals from, Kamille Burke, Emer Heaney and Clodagh Lohan. Longford’s performance was much better in the second half with their defence very solid in keeping out the Carlow forwards who did look dangerous at times.

Carlow, to their credit, did battle on to the final whistle reducing the deficit with two converted frees and late on in the game they converted a penalty. In the end Longford ran out 4-10 to 1-9 winners.

With round one completed, Brian Noonan’s charges can now prepare for a home championship fixture against Kildare on Sunday next in Monaduff GAA grounds Drumlish. Throw-in 2pm.

Longford U14 ladies and management travelled to the National GAA Development Centre in Abbotstown Dublin on Saturday last to compete in the Gold All-Ireland U14 championship series stage one. Longford were in a group of four along with Sligo, Limerick and Monaghan. David Tiernan's charges played Sligo in the first game of the day. Following a good opening game the Longford girls ran out 5-6 to 2-2 winners.

Next up for Longford in game two was Limerick. This turned out to be a very close game throughout. Longford went in at half time leading by just one point 1-4 to 1-3. The second half was again a very tense affair, with some great football being played by both teams. However, it was Longford who got the second half goal to secure a great win and their second on the day. Final score Longford 2-6 Limerick 1-6.

In their last game of the day Longford took on Monaghan. The first half was another very tight contest with both teams giving it their all with great defending and score taking on display. Going in at half time Longford were behind by one point Monaghan 1-4 Longford 1-3. Throughout the second half, Longford really upped the pressure on Monaghan. Some great defending by the Longford backs kept the Monaghan forwards very quiet on the scoreboard as the Longford forwards hit the net twice in the second half to secure a third win on the trot for Longford in this qualifying U-14 All-Ireland series, stage one. Final score Longford 3-7 Monaghan 1-6.

Congratulations to the panel and their management on a great day for Longford underage football winning three from three at Abbotstown Dublin.

It has been confirmed by the LGFA Longford will play Meath in the quarter-final on Saturday next April 23. Venue to be confirmed. Full details will be posted on Longford LGFA social media pages when announced.

Best of luck to the Longford U-14 panel, their management team, David, Dara, Charlotte, Georgina and Tom in the All Ireland quarter-final on Saturday next April 23.

U16 Leinster ‘C’ Championship Semi-Final
Following defeats to Westmeath and Wexford in the rounds one and three of the ‘B’ Leinster championship Longford U16 ladies now find themselves relegated to the ‘C’ championship semi-finals where they play Offaly on Saturday next April 23 at 2pm. This is a home game for the Longford girls who will be expected to reach the ‘C’ U-16 championship final which will be played on Saturday, May 7 next.

Best of luck to the U-16 panel and management in the semi-final. Longford LGFA supporters are asked to come out on Saturday next to cheer on our U-16 panel who can hopefully reach the Leinster ‘C’ Championship final in May.

U16 Longford Club Championship
The Longford ladies U16 club championship has commenced. Round one games in all three groups were played last week as round two games will take place around the county on Tuesday next April 26. All games at 6:30pm. Best of luck to all clubs competing. See Longford ladies fixtures for details of all games.

Gold Cup
The Gold Cup competition continued last weekend with round six games being played. There were wins for Carrickedmond, Killoe and St. Helen’s (Ballymore a bye) in group one and wins for Ballymahon/Forgney, Clonguish and Grattan’s (Ardagh conceded), (Mullinalaghta a bye) in group two.

Longford Ladies Féile
The 2022 Longford Feile competition will take place on Saturday, April 30. Clubs entering a team in this year’s Feile will be notified in the coming days through their club secretaries of all Feile game details. This year’s Longford Feile will be organised by Charlene Oates (Mostrim), Eilish Reilly (Mostrim) and Orla Toher (Killoe).

Longford U12 Club Championship
Round four of the Longford U12 club championship took place last week. It's great to see all the U12 girls out playing for their clubs and enjoying these games which have all been played in a very sporting manner. Round five games will be played this Thursday, April 21. See Longford ladies fixtures for details of all these U12 championship club games.

Longford LGFA Fees
A final reminder to all clubs that affiliation and competition fees and the first instalment of the levy is now due. The breakdown of all fees due has been sent to each club secretary by email. Please transfers the payments directly to Longford Ladies LGFA bank account and reference club name and forward a breakdown of the payment to treasurer.longford@lgfa.ie.

Items of Interest
If any member of the Longford LGFA community would like to share a story or an event and have it mentioned in these notes please forward your information to pro.longford@lgfa.ie and I will be glad to include your information in this column.