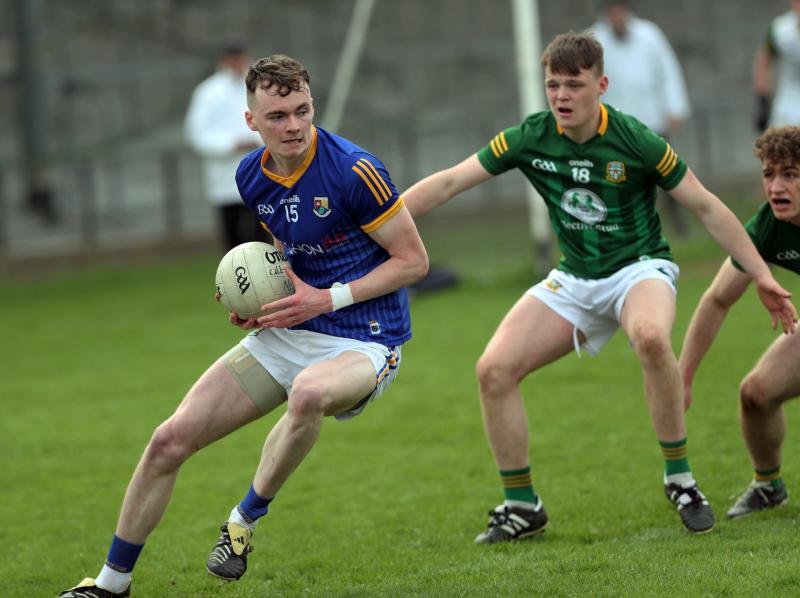 There was heartbreak for Longford’s U20 footballers as they faltered to Meath by a single point following a dramatic finale to this gripping Eirgrid Leinster U20 Football Championship quarter-final at Glennon Brothers Pearse Park.

Longford trailed at half time by 0-6 to 1-4 and the sides were deadlocked at 0-12 to 1-9 when Longford were awarded a penalty. Jack Duggan, who was exceptional for Longford, took the responsibility and his powerful strike beat the Meath ‘keeper but struck the upright and flew to safety. It was cruel luck.

Keelin McGann did get Longford in front however Meath kept battling and they snatched victory from the jaws of defeat.

Meath’s reward is a provincial semi-final date with Dublin next Thursday evening, April 21 at 6.30pm in Parnell Park, while reigning Leinster and All-Ireland champions Offaly are at home to Kildare in Bord na Mona O’Connor Park on the same evening and at the same time, with Longford’s Patrick Maguire in charge of the whistle for that encounter.

Longford, aided by the elements, established a 0-3 nil by the 12th minute with the points coming from Jack Macken and Jack Duggan (2, one from play and the other from a ‘45).

The Royal County exploded to life in the 21st minute as Ruairi Kinsella crashed home an equalising goal and they then edged ahead by the minimum, 0-3 to 1-1. Duggan tied matters before Meath went two points clear, 0-4 to 1-3 by the 26th minute.

Duggan scored twice more for Longford and sandwiched in between the Royals grabbed their fourth point and it meant that at half-time, Kieran Carey’s Longford trailed by a point, 0-6 to 1-4.

On the resumption, Meath registered the opening two points before Macken replied for Longford in the 37th minute, 0-7 to 1-6. Meath restored their goal cushion and Longford rallied and responded with points from Duggan (free) and Matt Duffy (a super individual score) to reduce the gap to a single point, 0-9 to 1-7, after 43 minutes.

Duggan replied to a Meath brace with two excellent frees, 0-11 to 1-9. Meath regained the lead and Jack Duggan, with another brilliant free, tied the game at 0-12 to 1-9, 55 minutes gone.

Proceedings then exploded to life as Longford were awarded a penalty and Duggan had the misfortune of seeing his strike crash against the upright. Meath were down to 14 for the rest of the game as Adam McDonnell received a black card for the penalty foul.

Keelin McGann edged brave Longford in front, 0-13 to 1-9, but in injury time Meath stole the verdict with two late points, 0-13 to 1-11, including the winner from Darragh O’Reilly.