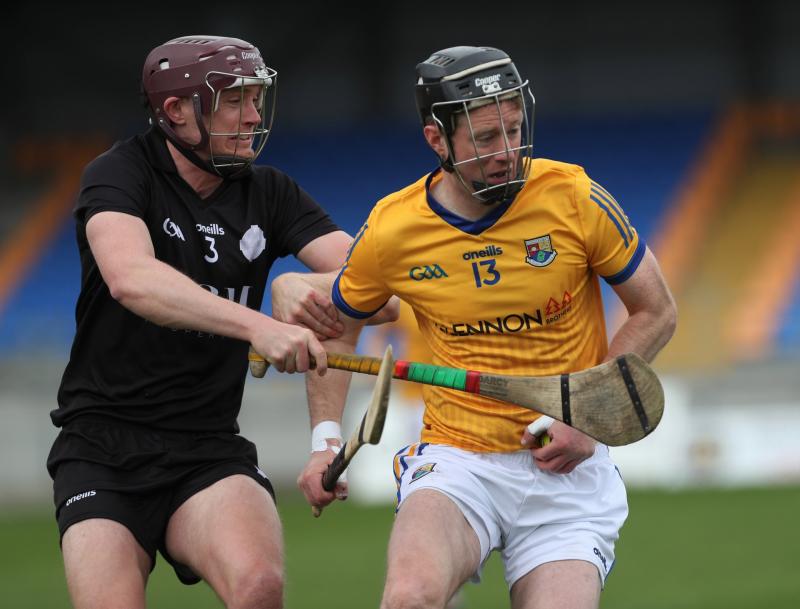 Longford's Joe O'Brien has his upper arm strength tested as he is tackled by the Lancashire full back Picture: Syl Healy

Longford senior hurlers showed great character as they fought back from seven points adrift to defeat Lancashire in an exciting Lory Meagher Cup Round 2 round two encounter at Glennon Brothers Pearse Park on Saturday afternoon.

Adrian Moran’s Longford trailed by 0-5 to 0-7 at half-time and when they slumped further behind, 0-7 to 1-11 by the 51st minute, they looked to be in serious trouble.

However, they brilliantly kept their composure and resiliently clawed back into contention and over the closing 20 plus minutes they outscored Lancashire by 0-10 to 0-1. It was a hugely impressive fightback and the result keeps Longford’s prospects of Lory Meagher Cup success very much alive.

Earlier this year, in the league, Longford overcame Lancashire with nine points to spare, 1-26 to 3-11 but it was much different on this occasion as they were made to fight every step of the way before securing victory.

From the throw-in, Lancashire, who were resoundingly beaten 1-10 to 2-27 in round one by Louth, were lively and they laid down an early marker as they were 0-2 to nil ahead inside eight minutes.

Longford, still reeling from the setback of the previous Sunday’s agonising 4-9 to 0-20 loss at the hands of Leitrim in the opening round of the Lory Meagher Cup, were on level terms by the 14th minute as Paddy Lynam and Joe O’Brien were accurate from placed balls.

The teams traded points, with the wily O’Brien on target again for Longford, and with 20 minutes elapsed the teams were deadlocked at 0-3 apiece. Lancashire then enjoyed something of a purple patch as they reeled off four unanswered points.

The visitors were 0-3 to 0-7 ahead after 31 minutes but Adrian Moran’s charges reduced the arrears with converted frees from Paddy Lynam and Joe O’Brien to leave two points separating the sides at half-time Longford 0-5 Lancashire 0-7.

Longford needed a positive start to the second half but they failed to ignite and the goals they so desperately craved eluded them once again.

By the 51st minute Lancashire were in front by double scores, 0-7 to 1-11, leaving Longford with a proverbial uphill task. O’Brien (free) and Cian Kavanagh contributed Longford’s 6th and 7th points, respectively.

The Longford men, to their credit, refused to fling in the white towel and between the 53rd and 62nd minutes they registered seven points in succession courtesy of O’Brien (2), Reuben Murray, Lynam (free), Emmet Corrigan (2) and Kavanagh, to draw level at 0-14 to 1-11.

Lancashire regained the lead with a point, only for Clonguish Gaels’ Joe O’Brien to restore parity from a 66th minute free.

Moran’s Longford men dug deep and they sealed the victory with two late points from Aidan Sheridan and Lynam, 0-17 to 1-12.