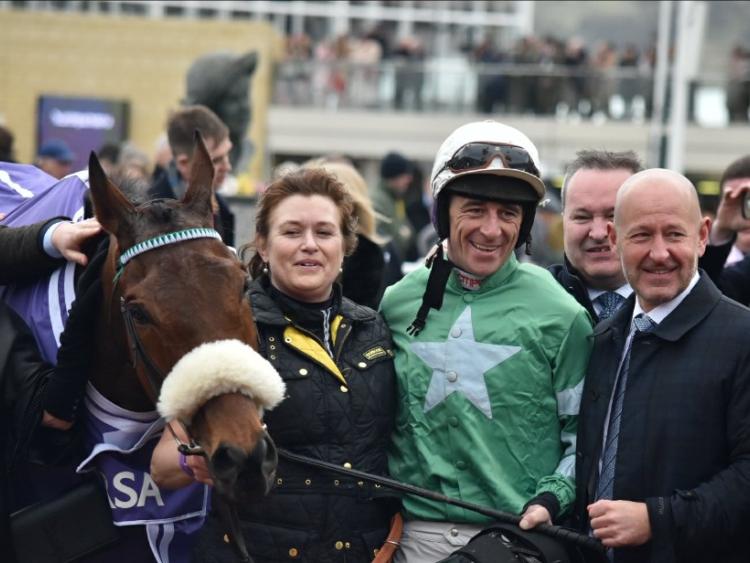 Presenting Percy with jockey Davy Russell and owner Philip Reynolds after their victory at the Cheltenham Festival earlier this year.

Some of Ireland’s leading chasers are bound for Punchestown this Sunday, December 9 for the 20th running of the Grade 1 John Durkan Memorial Chase as top level action returns to the home of Irish jump racing.

A quality list of 19 entries have stood their ground for the prestigious Grade 1 contest which is set to mark the return to action of Presenting Percy, owned by Longford's Philip Reynolds, the current Gold Cup favourite.

The prestigious Grade 1 contest has been a regular target for Gold Cup winners with Kicking King, Don Cossack and Sizing John all among past winners of the John Durkan Memorial Chase.

Gordon Elliott boasts a strong hand at the entry stage too. The Storyteller, winner of the Grade 1 Growise Novice Chase at the Punchestown Festival, could be joined by Cheltenham Festival winner Shattered Love, while the Noel Meade-trained Grade 1 winner Disko and the Joseph O’Brien-trained Edwulf are also notable entries.

Pat Kelly’s stable star Presenting Percy hasn’t run since winning at the Cheltenham Festival for a second consecutive season last March but his imminent return at Punchestown on Sunday is exciting the horse’s owner Philip Reynolds.

“All being well with Presenting Percy this week the John Durkan at Punchestown on Sunday is where he is heading,” Reynolds said this week.

“He has been really, really well and I think Pat (Kelly) would have had plans to start him before now but the dry ground scuppered any other plans that he had. Presenting Percy was back in from his break earlier than he was last year with a hope that he’d have been out before now but we can do no more at home and he has to get back onto the track now. He’ll be kicking the door down if he doesn’t get out to do something shortly!

“The John Durkan is a nice starting point for him and if it did rain this week, two and a half miles around Punchestown can be the best part of three miles on a flatter track. It’ll be great to see him back out on track but it is a nervous time. The horse looks great and he has been in super form and pleasing Pat at home but he has got to go and do it on the track again to show that he can pick up where he left off last season and I hope to God he does.”

The John Durkan Memorial Chase is due off at 2pm on Sunday with the opening race scheduled for 12.20pm and the ground at Punchestown is currently good on the hurdle track and good, good to yielding in places on the chase course.

Racing manager Richie Galway commented: “Our ground is in great shape following some decent rainfall over the weekend. Like everyone in jump racing we are pleased to see further rain forecast Wednesday and Thursday which could be heavy at times. This should leave the going ideal for a quality card on Sunday."

"The Durkan family have been great supporters of Punchestown and judging by today’s entries the twentieth running of the race looks set be a special renewal."