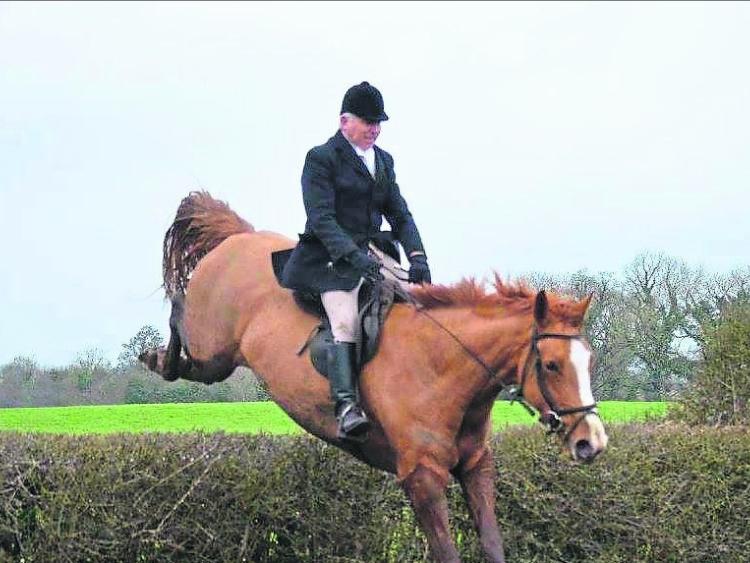 The late Harold McGahern in action.

The equestrian community in Longford and throughout the country was deeply saddened to learn of the news of the sudden passing of legendary breeder Harold McGahern.

Predeceased by his mother, Lily, father, Tim and his brother Noel, Harold will be sadly missed by his wife Margaret, his children Joy, Angela, Una and Aonghus, brothers Ray, Dermot and Des, sons-in-law Kent and Damien, by his adored grandchildren Ciara, Teagan, Tim, Cathal and Chris, his extended family and large circle of friends.

Harold, along with the late Sam Murphy, co- founded the Longford Hunt Branch of Irish Pony Club, which was established in 1980.

The club posted a poignant Facebook tribute. “Harold always made himself available with his wealth of knowledge in all areas of equestrianism. In the early days, his premises at Rincoola was the base for Longford Pony Club. He was a wonderful promoter of the equestrian sport, always encouraging young talent, many of whom went on to compete at an international level.”

Longford Harriers also paid tribute. “Longford Harriers are deeply saddened to hear of the passing of our friend and hunt member Harold McGahern. A regular face on the hunting field. He will be missed by all. The Longford Harriers wish to offer their most sincere condolences to McGahern family at this very sad time.”

A highly regarded teacher at Ardscoil Phadraig, Granard, Harold was one of Ireland’s most successful breeders of showjumpers.

Among the many International horses that he bred is the famous Rincoola Abu, who with rider Captain Gerry Flynn jumped on several successful Nations Cup Teams, and Grand Prix at 1.50m level.
Also jumping on successful Nations Cup teams and Grand Prix was Will Wimble who with Alexander Butler jumped at 1.60. Will Wimble has Connemara connections, as his granddam was Coolbawn Claire by Hazelwood Boy.

Harold with his great friend, the late Col Ronny McMahon, was instrumental in the creation of the Connemara Performance Hunter, the Young event horse series, and the Performance Irish Draught at the RDS, at which he stewarded, and each year he held a qualifier for these at his home in Rincoola, Granard.

Connemara Pony Breeders' Society posted on Facebook: “We were delighted when Harold accepted our invitation to judge the Green Hunter, Performance mare, and the Loosejumping at Clifden last year, which he did with his usual efficiency and good humour, having had a word with everyone before heading home to Rincoola in Co.Longford.

“He will be sadly missed by every quarter of the equine community, our heartfelt sympathies go to his wife Margaret, daughters Joy, Una, Angela and son Aonghus. Ar dheis dé go raibh a anam uasal.”