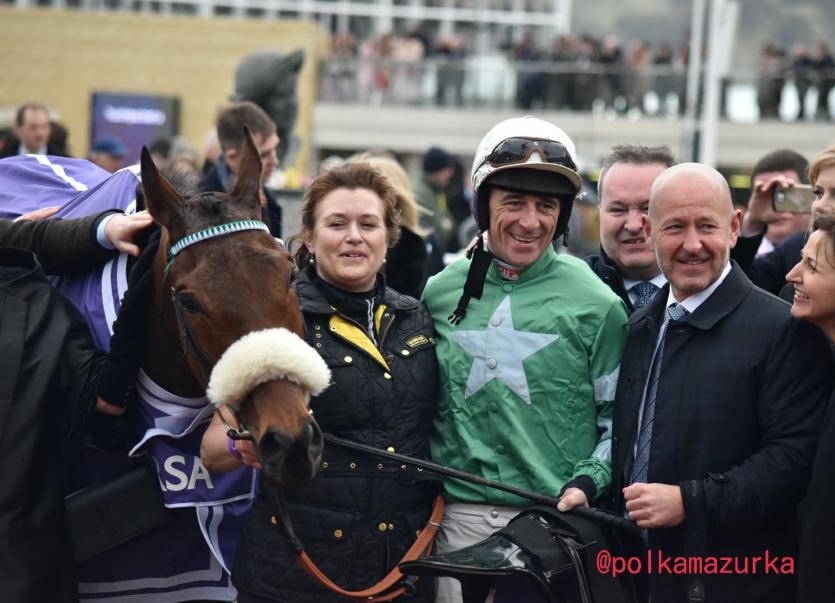 Longford's Philip Reynolds confessed to being 'in pieces' after he watched his seven-year-old horse 'Presenting Percy' win the  RSA Insurance Novices Chase (Grade 1) at the Cheltenham Festival today.

Last year ‘Presenting Percy’, with jockey Davy Russell on board and trained by Patrick Kelly, also triumphed in the Pertemps Final at Cheltenham.

Indeed, it is the THIRD year in succession that the trio of Reynolds, Russell and Kelly, have won at Cheltenham as in 2016, they also landed the Pertemps Final at with ‘Mall Dini’.

5-2 favourite 'Presenting Percy' came from behind to take victory in today's RSA Steeple Chase ahead of second placed Monalee (100-30) and Elegant Escape (9-1) in third. Ballyoptic was fourth and Black Corton, who made most of the running, finished fifth.

Bookmakers reacted by quoting odds of between 6-1 and 10-1 for 'Presenting Percy'  for next year's Timico Cheltenham Gold Cup.

Jockey Davy Russell, a winning jockey at every Cheltenham Festival since 2006,  told ITV Racing: "I have to stop underestimating this horse. He seemed unimpressive to me, but what a horse – after three miles, he’s barely out of breath."

Philip Reynolds told the Racing Post: "That was a great ride from Davy and I don't know what he would have been thinking with Monalee upsides as he could have ridden either of them."

Davy Russell, A winning jockey at every #CheltenhamFestival since 2006 as he triumphs in the RSA Steeple Chase on board Presenting Percy. What an achievement! pic.twitter.com/V0KCnjY7zv